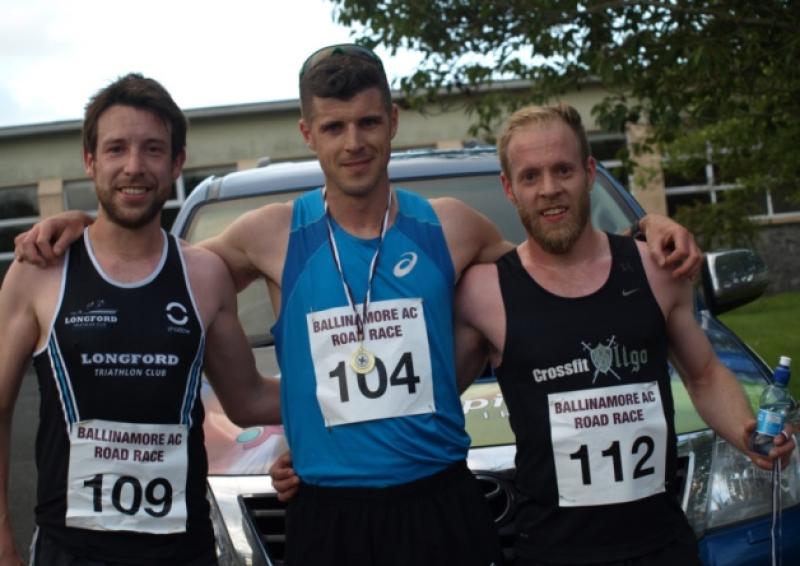 Local athlete Colin Griffin, who has taken up competitive running following his retirement from international Race-walking, was an easy winner of the Ballinamore Festival Open 10K race held in pleasant conditions on Friday evening last.

Local athlete Colin Griffin, who has taken up competitive running following his retirement from international Race-walking, was an easy winner of the Ballinamore Festival Open 10K race held in pleasant conditions on Friday evening last.

The Dublin based Ballinamore double Olympian recently finished 16th in the Senior Mens’ section of the AAI Half Marathon and hopes to complete his first marathon at the Dublin City Marathon on the October Bank Holiday Monday.

The 10K is held in conjunction with a 5K race which also attracts joggers and walkers and has the same start and finish.

Being the 50th anniversary of the foundation of Ballinamore Athletic Club attracted a larger number of runners than last year and each finisher received a special medal to mark the occasion.

Colin Griffin led the two races from the start until the courses separated at the bottom of Main St.

The 5K was led by last year’s winner Conal Brown of St Malachy’s AC Belfast but he aggravated an old injury soon afterwards and had to retire from the event.

The running was now taken up by Kian Lindsey of Sale Harriers, Manchester whose mother Ruth (former club member Ruth McLoughlin) finished 28th in the race and Kian went on to win a close finish from Ronan Devoy of Portlaoise AC.

Sharon Grant of Portlaoise AC ran a storming race to finish third overall in a time of 19.43 which was well inside Laura O’Dowd’s record of 20.30 set last year. Fourth finisher was Ballinaglera born Dunboyne AC athlete Michael Cornyn who recently won the bronze medal as part of the Irish Team in the World Masters Over 50 Cross Country Championship in Lyon.

Colin Griffin had almost three minutes to spare over last year’s runner up, Ross Gannon of Longford with James Callaghan of Sligo third. Mari Johnston of Sligo AC won the Ladies race in 42.24 just ahead of Maura Dervin of Mullingar Harriers.