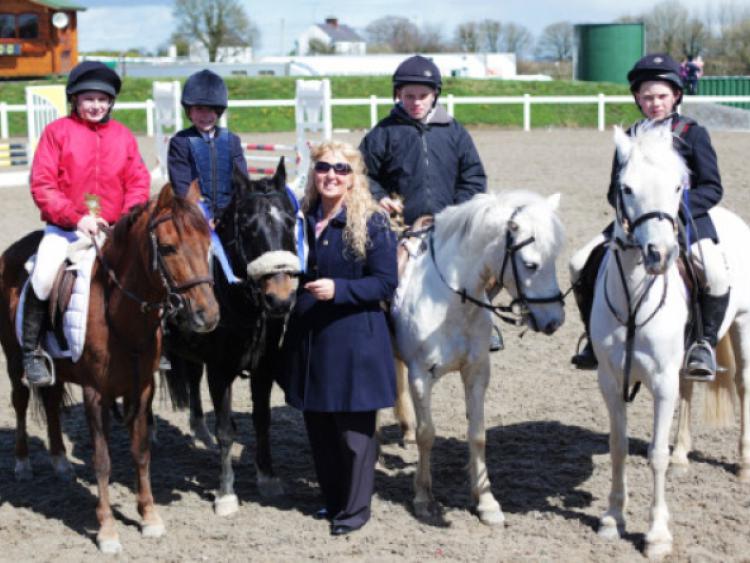 In a dramatic jump-off against the clock, Gaelscoil Liatroma Equestrian Team where narrowly pipped at the post in the National Interschools Show Jumping Championship which was held at the Mullingar Equestrian Centre last weekend.

In a dramatic jump-off against the clock, Gaelscoil Liatroma Equestrian Team where narrowly pipped at the post in the National Interschools Show Jumping Championship which was held at the Mullingar Equestrian Centre last weekend.

With a strong turnout of 11 primary schools from across the Country, the 48 young riders competed over a highly technical course in dramatically changeable weather conditions, which featured bright sunshine, interspersed with dark cloud, hail stones and strongly gusting winds, all adding to the climax of this All Ireland competition.

Sunday’s competition was a nail bitting introduction into national equestrianism for the Gaelscoil Liatroma Equestrian team which was only formed in the previous week after parents and pupils realised that they where not only eligible, but also had a potential team of young riders and ponies to enter.

The competition features four riders, from each school team, who jump their horses and ponies over a course of differing fences. Each team is scored on their individual riders rounds. The leading teams then nominate two riders to compete against the other finalists on a shortened and revised course. During this “speed round” riders are timed against the clock, with the fastest aggregate time deciding the final team placing.

Second place on the day, just 0.5 second behind Cratloe National School, County Clare (the eventual winners) was an excellent result which bodes well for the future of show jumping in County Leitrim.