“No regrets” as Colin walks away 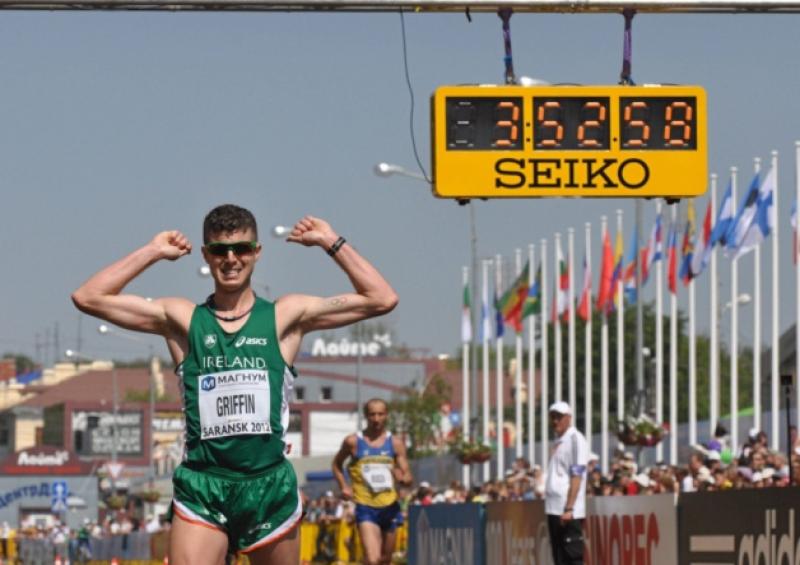 After competing in two Olympic Games and flying the flag for Leitrim at the highest sporting level, Ballinamore’s Colin Griffin has decided to hang up his spikes.

After competing in two Olympic Games and flying the flag for Leitrim at the highest sporting level, Ballinamore’s Colin Griffin has decided to hang up his spikes.

The multiple race-walking champion and former Irish record holder confirmed to the Leitrim Observer that he had walked his final race as Colin announced his retirement from competitive race walking.

After taking a year out of the sport following his disappointment in not qualifying for last year’s World Championships, Colin explained in an exclusive interview that his hunger and desire to compete has gone but he leaves the sport with “no regrets”.

“I suppose being 32, you want to be sure you have no regrets closing that chapter of my career,” said Colin, adding “I knew after the Olympics, the seed had been planted and the question of whether I had the stomach to continue at that level once I got the other side of 30.

“I was quietly developing other career opportunities and I was getting fulfillment from other areas and not as much from my athletics career as I would have like so I just had to be realistic and make a mature decision.

“I had sort of half settled on the idea last year but I decided to take a break and just give myself the option that if I did have the hunger to come back, there was no pressure there and I was free to do it.

But I just knew this Summer that the appetite didn’t return and I was happy to finally confirm my resignation and move on to other things.”

Colin admitted that the need to earn a living played a big part in his decision - “Athletics, while it is great to do it and it was a privilege to be a full-time athlete and pursue my dreams for as long as I could, it doesn’t secure a stable source of income.

“Unless I am coming back with a championship medal or top six or top eight championship performances, it is very hard to keep justifying that as you get older.”

World 50K Champion Robert Heffernan did try to persuade the Ballinamore walker to continue but Colin felt he couldn’t justify the commitment needed - “One person who did try to convince me to come back was Robert Heffernan but as I said to him, if he didn’t have a few top six or top eights when he came back from injury in 2007-2008, would he still be competing at that level and I suppose he acknowledged he wouldn’t be.

“If I had one of those performances, a top six or eight, I could have justified it, you are within striking distance of a medal but I didn’t get that far.”

Looking back on his career, Colin points to competing in the London Olympics among his career highlights - “I’m happy enough and proud with the few performances I’ve had at Senior level, at European and World Cups and being the first Irish athlete to break the 50K record at my first attempt.

“London was a special day but the one thing that was missing was my own performance, everything else seemed to fall into place. The fact that I qualified so late, I was able to enjoy the build-up.

“It was a home Olympics, a home crowd and being one of the local athletes, I was picked out to be introduced and that introduction to the crowd was special. I raced the way I wanted to race and it didn’t work out, I’ve got to live out.

“Then to be there that afternoon for Laura [Reynolds] and her performance, it was a proud moment. London was special, so were the European Championships in 2010, overcoming injury to get to the start line, to hold things together and finish 11th was special.

“Other small things like my last attempt to qualify for the Olympics and I actually produced one of my best performances ever in that race. My first 50K race when I set an Irish record so there are a few moments that stand out.”

Colin’s retirement does not mean a move away from the sport as he continues to coach his fellow Leitrim Olympian Laura Reynolds and he hopes to put his own experiences to good use - “I’ve always had that coaching instinct, I was self-coached throughout my career, I’ve always had that analytical brain which is probably not the best thing to have, as an athlete.

“I took the responsibility on myself and it worked out sometimes, didn’t work out others but certainly as a coach, I learned a lot from the sport. I made a lot of mistakes myself but I’ve learned from that and hopefully, any athlete who works with me over the next few years will learn from that.”

That experience will help those who Colin now works with through the Altitude Centre Ireland and in the Sports Surgery Clinic in Santry - “I’ve worked hard on my career over the last few years and fortunately, opportunities have come my way. I’m working with a great team here in the Sports Surgery Clinic, its a very progressive, dynamic organisation.

“I’ve got my own Altitude Centre business and even though it is at an early stage, it has got growth potential and I’m working away at that. I’ll always be involved in the sport and in the clinic here, I’ve been fortunate enough to be involved with other sports and learn from them and add to my own knowledge and skill-set.”

Colin paid tribute to the role played by his parents Padraig and Patricia in his sporting career - “I was fortunate to grow up in that environment and it gave me an appreciation of all sport but particularly athletics. I was fortunate enough to have every opportunity growing up.

“I inherited both my parents passion for sport and their strengths. I was fortunate enough to have that environment and support.

“Growing up in a small rural community, it was unheard of when I made the decision at 15 to give up gaelic football but when I started to progress my career, starting winning national titles and competing internationally, people started to realise that I knew what I was doing.

“It wasn’t easy, I had to do it all myself, I had no training partners and even when I moved to UL in 2000, I was still the only race walker there and I trained a lot on my own. I was fortunate enough to build a good support team around me but in terms of doing the work, I had to do it myself but I was happy enough to do that.”

Asked if he had any advice for Leitrim’s future sporting stars, Colin’s advice was typically honest - “Have no regrets, go for it. Don’t neglect your academic career. The Leaving Cert is important but it is not the be all and end all but it is good to have something.

“Have your academic career in place and then pursue your sporting career as much as you want. Surround yourself with good people, a good coaching team, good sports science and medical people.

“I suppose the big danger is the early development phase, 19 to 23, that is when things can go wrong, you get injuries, things can go off track. Work with good people and if you have biomechanical issues... and if I knew 10 years ago what I knew now, I would do things differently.

“Get into a good strength & conditioning programme that will address any issues you have now and make things easier when you get older.”