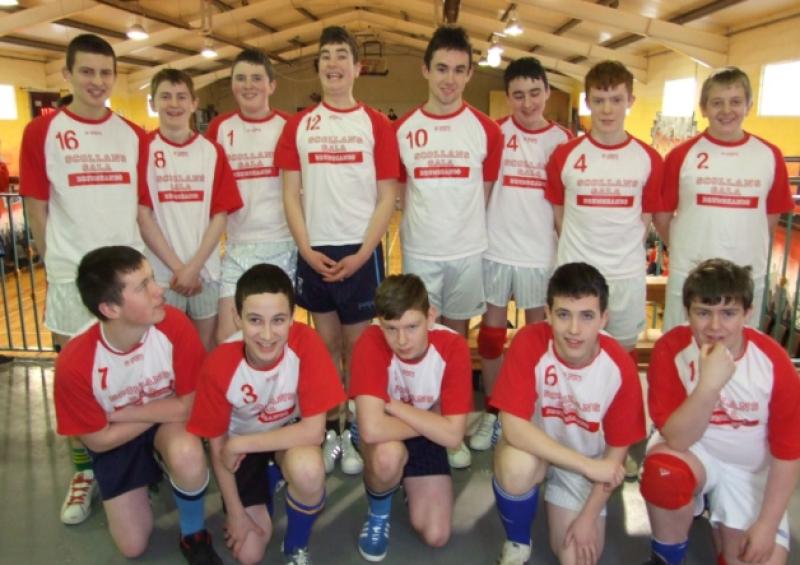 Two Drumshanbo VS teams put on a great displays as both qualified for the National quarter-finals and almost shocking Dublin’s Cabra A in the All Ireland semi-final.

Two Drumshanbo VS teams put on a great displays as both qualified for the National quarter-finals and almost shocking Dublin’s Cabra A in the All Ireland semi-final.

The day’s first game was between Drumshanbo C and Elphin B, with a very even first set in the beginning until Elphin built up a commanding lead as Drumshanbo struggled with the serves until Shane McGreneghan scored three in a row to steady things. However Elphin were better prepared and despite a strong comeback, Elphin won.

Drumshanbo’s serving improved dramatically with the introduction of Brian Keavney, scoring seven in a row. This time Elphin made a comebackbut that first run of serves meant that Drumshanbo would win the set and the game on score difference.

Drumshanbo Cs faced Thurles whose brilliant defence meant the sides were level on most scores although Brian Moran’s serve was needed to pull back from 16-11 to 16-15. With good defensive play Drumshanbo came from 17-21 down to 24-22 but Thurles came again.

In the second set, the turning point was Gavin Kane’s serve when he turned the score from 11-10 to 17-10 and Drumshanbo should have finished out at 24-17. They finally got the crucial win and favourable score difference after six set points were saved by the Tipperary school.

Drumshanbo B/D faced Cabra as Sean Priorserved Drumshanbo ahead from 1-3 to 5-3 but Cabra took back the lead and won the first set easily. In thesecond, Drumshanbo fought back but Cabra got one run of six serves and that proved to be the difference.

Drumshanbo B/D had to play Athy to decide runner up in the group. This time Drumshanbo got the early lead and led 16-13 before Athy levelled. Then up stepped Conor Daly who served all the way to 25.

In the second set Gavin Flynn peaked, continuing to hit spike winners, with his hard hitting aces in serve. Liam Brady helped with sets and fist over a difficult ball. Cormac Reynolds was on for the final push. Liam Rowan guided over winners and served from 20 to 25.#

Surprise results elsemeant that the two Drumshanbo teams met in the All Ireland quarter-final. Both sides fancied their chances. Darren Cull kept the Cs in touch with aces, crucial digs, spikes and chasing after impossible balls. The B/D combo led nearly all the way but it remained close throughout and the C inched by at the end helped by the tall Aaron Keavney tipping down.

In the second set, leading by example, the B/D captain Fergal McWeeny blocked, spiked and served in his best ever game. Caolan Carty volleyed over but then newcomer Yahia Latif hit six serves to put the Cs ahead.

Diarmuid Beirne hit his finest hour. Serving 5, he levelled the set at 19 and, with his superb defending, and a crucial serve from Shane Clarke brought the game to a thrilling 24-24.But the Cs held out.

Now Drumshanbo C faced the giants of Cabra in the Ireland semi-final.

In the first set Drumshanbo looked poised, had prepared well and were willing to do anything to win. Cull threw himself around the court and got to balls that weren’t his to get. Then Kevin Lynch served deep and suddenly Cabra were mortal. Drumshanbo went from 10-11 to 17-11 and more good serving from Keavney and Cathal McKeon meant that they put down a marker by winning the opening set easily.

Drumshanbo were now a set away from the final but Cabra stormed into a huge 15-1 second set lead. Drumshanbo began to chip away at the deficit but Cabra still won the set with ease.

Going into the last set it was all to play for, both teams were not willing to give up points easily. Cabra began to pull away but Drumshanbo however were determined not to be remembered for the last set and Cull, McKeon and McGranahan put up a fierce fight.

Lynch and Keavney again displayed good serves but Cabra were too close to victory to let go. Cabra’s A team were victorious but Drumshanbo had a lot to be proud of as they performed like a team of a much higher level.