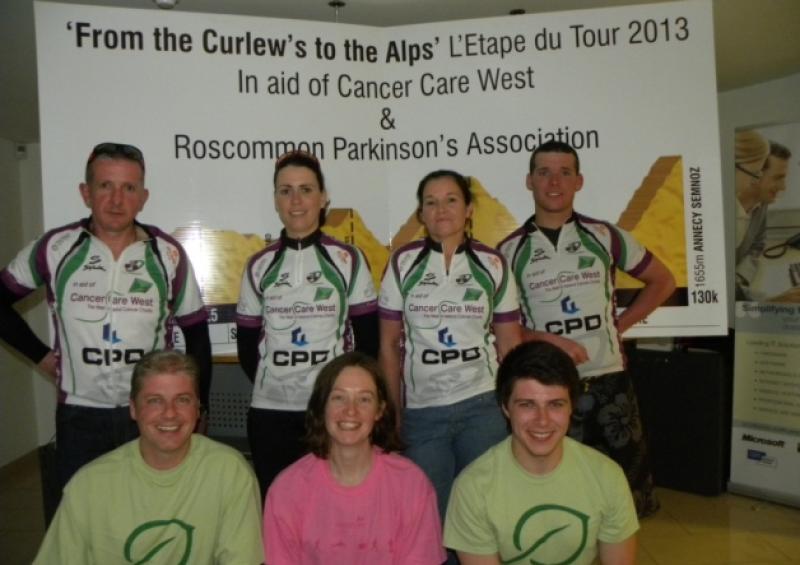 In little under four weeks’ time, eight Boyle cyclists will face one of cycling’s toughest challenges when they take part in L’Etape du Tour.

In little under four weeks’ time, eight Boyle cyclists will face one of cycling’s toughest challenges when they take part in L’Etape du Tour.

The group leave Ireland on Tuesday July 2, five days prior to L’Etape to accustom themselves to the weather and to undertake high altitude training in the French Alps where the L’Etape will take place.

The one day event, which is an actual stage of this year’s Tour de France, features seven major climbs including the 1142m Col des Pres, the 1463m Mont Revard and finishes on the 1655m summit of Annecy Semnoz – with the 130km to be completed within a controlled time limit.

The group started training last November and have been gradually building their distance, taking part in the Wicklow 200k cycle last weekend and also undertaking the Tour de Burren. The cyclists are a regular sight on the roads of north Leitrim as they often train in the Glangevlin area.

They group have also cycled on static turbo trainers in Ireland West Airport and Supervalu Boyle recently to raise funds for their two charities and they will hold a similar venture this Saturday, June 15, in Tesco Carrick-on –Shannon.

Other fundraising events that are planned include a Casino Night in The Patrick’s Well on this Saturday night June 15, and a cake sale in Boyle Enterprise Centre on June 28.

While the L’Etape will be a So if you are in the Tesco, Carrick this Saturday, come over and say hello to the cyclists as they raise funds for Cancer Care West and Roscommon Parkinson Association.