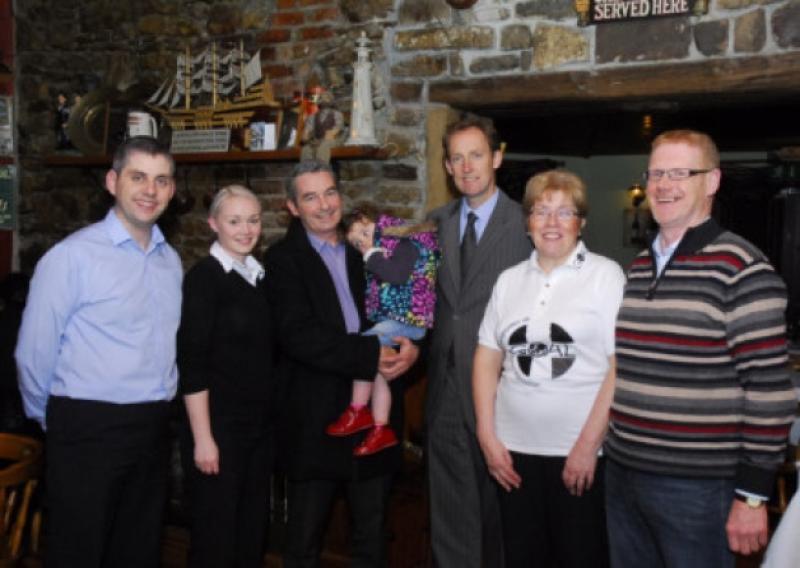 GOAL’s Barry Andrews was a very interested guest at the launch of the tenth annual GOAL Mile in Bornacoola last Thursday evening.

GOAL’s Barry Andrews was a very interested guest at the launch of the tenth annual GOAL Mile in Bornacoola last Thursday evening.

The CEO popped into The Copper Still in Dromod last Thursday to officially launch the tenth edition of the GOAL Mile in Bornacoola, an event that is fast becoming a staple part of the New Year’s Day celebrations in Leitrim.

Driven by the enthusiasm and energy of Noel Mahon, the GOAL mile this year will have special guests including London 2012 Olympian Laura Reynolds, singer Charlie McGettigan , playwright and author Seamus O’Rourke along with local dancers.

Once the participants have recovered from their mile run to start 2014, the action will move to The Copper Still where they will be an auction and raffle as well as music and entertainment from Charlie McGettigan, The Rodeo Man and Seamus O’Rourke.

And GOAL’s Chief Executive Officer was on a whistle stop tour through Cavan, Longford, Leitrim and Roscommon to drum up support for the third world agency’s massive fundraising efforts.

“Our GOAL Mile is a big thing for us,” said B arry, “and some people show up and they can’t give any money to it and that is fine too because awareness is important too, education and solidarity and just showing up is a statement too, it is great for GOAL.

“That participation thing, that link for the community is something we want to protect and get through this austerity and thus improve the fundraising.”

The link to the community is evident through the work of Bornacoola stalwart Noel Mahon and Barry also highlights another link to the area through GOAL worker Fiona Gannon - “Noel is on his ten year anniversary this year, it is just fabulous. It will be great to thank Noel for his work over the years.

“We have a GOAL member of staff, Fiona Gannon who is from Bornacoola, she has 25 years in GOAL next year. She is a nurse by background and started out volunteering for GOAL and she worked her way through her career. She is our Quality Advisor throughout our operation so we have a good strong link there going back over the years.”

And Barry appealed to the people of Leitrim and Roscommon to come out and support the GOAL Mile in Bornacoola on New Year’s Day - “I’d say there is a GOAL mile near you, get out there and show a bit of solidarity with people who are less fortunate than you.

“I’m not trying to be pious but that is what we’re looking for, people to get out there and be involved. If people are willing to support our work and the various appeals we have going at the moment, all the better.”

Anyone who wishes to get involved with the GOAL Mile in Bornacoola or to contribute through sponsorship cards can contact Leitrim GOAL Mile organiser Noel Mahon at 087-2646931.

• See the Leitrim Observer in the coming weeks for a longer in-depth interview with GOAL CEO Barry Andrews.