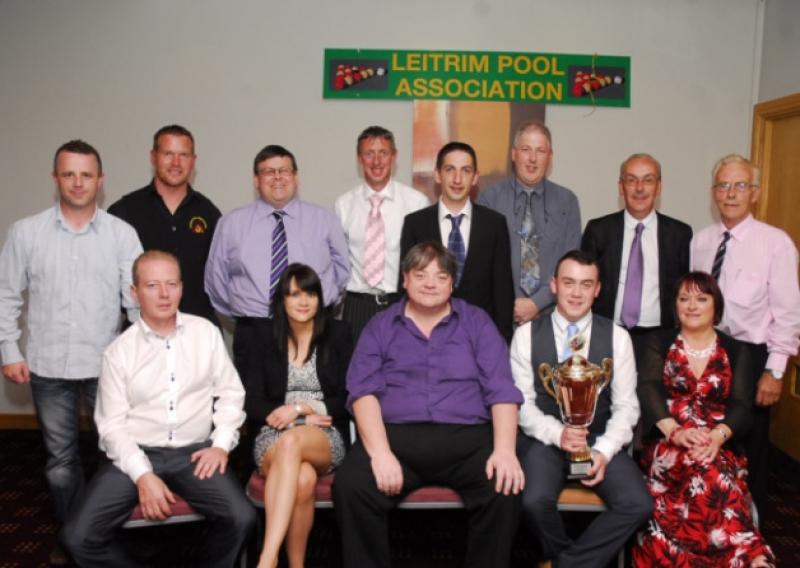 The second annual Dinner Dance of the Leitrim Pool Association was held last Saturday in the Lough Allen Hotel, Drumshanbo.

The second annual Dinner Dance of the Leitrim Pool Association was held last Saturday in the Lough Allen Hotel, Drumshanbo.

A delegation of officials from the Irish Pool Association were in attendance to honour Jamie Gaffney of Ballyfarnon who was crowned European Champion at the championships held in Malta earlier in the year.

LPA chairman John Casey welcomed everyone to the dinner dance with a special welcome for the Irish delegation of John McMahon who won the Irish Championships held in the Mayflower Centre, Drumshanbo in 1999 and also 2000. John praised the commitment of John McMahon with Rod Clifford and Sandra Bryan always willing to answer a call when needed.

In his speech, John McMahon acknowledged the great contribution of players from Leitrim who played at the various events throughout Ireland and represented Ireland aboard, over the years. John announced that Leitrim was the top county in Ireland, thanking Liam Shanley who always brought a bunch of young lads to the ranking tournaments with Shane O’Hara, Barry Reynolds, Eddie McGowan, Colin Crossan, Hugh Kielty, Niall Sweeney, Liam Shanley, Maggie Brolly among others who represented Ireland at International level throughout the years.

Rod Clifford, newly elected Chairman of the IPA, presented Jamie Gaffney, a member of the Leitrim U18s and Men’s team who became European Junior Champion at the Europeans held in Malta in the year with a beautiful engraved wrist watch.

Among the surprise presentations were Eddie McGowan in appreciation for his commitment to pool, Jamie Gaffney on his European achievement and to Player of the Year Colin Crossan.

Rod also congratulated the Leitrim Men’s team on winning the Shield at the Inter Counties. The team consisted of Pat McTiernan, Paul Lee, Paul Kelly, Maurice Cullen who also received the award for Most Improved Player of the Year. Hugh Kielty, David Flnn, Wayne Kilmartin, Gavin Donnelly, John McKenna, Colin Crossan, Kevin McWeeney, Jamie Gaffney with Liam Shanley and Jeremiah Coulter added to the honours list when John Casey presented them with All-Ireland team medals to their great surprise. Making the draw for all the prizes donated, John Casey thanked everyone for their support and hoped for even great success in the year ahead.

John Casey thanked all who donated spot prizes for the raffle with the star prize of a Hamper kindly donated by Declan Killoran, Ballyfarnon and won by Bobby Mulvey with Michael Gaffney, Michael Casey, Noleen Casey and Pat McTiernan, the other winners. John thanked the Leitrim Observer for all the coverage throughout the year and Willie Donnellan, the Observer photographer along with Shannonside FM for all their publicity.