Griffin will not compete after funding snub 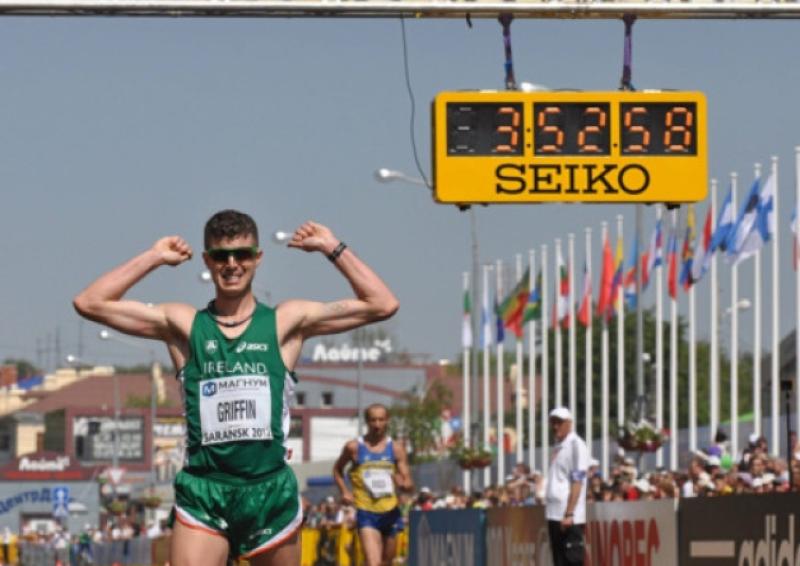 Double Olympian Colin Griffin has confirmed to the Leitrim Observer that he will not compete at this year’s World Championships in Moscow after the Ballinamore walker was controversially ommitted from the Irish Sports Council’s International Carding Scheme for 2013 last week.

Double Olympian Colin Griffin has confirmed to the Leitrim Observer that he will not compete at this year’s World Championships in Moscow after the Ballinamore walker was controversially ommitted from the Irish Sports Council’s International Carding Scheme for 2013 last week.

Griffin, one of only three Irish athletes to achieve the Athletics Ireland “A” standard for the World Championships, called the decision to ommit him from the 2013 Carding Scheme “a kick in the guts” and admitted that unless something drastic happens in the next week, he will not be competing in the World Championships.

To add to the irony of the situation, Laura Reynolds, who is coached by Colin, was allocated a grant of €12,000 after her magnificent 20th place finish at the London Olympics last August.

Colin’s omission received extensive publicity nationally and the Ballinamore walker received a lot of support for his statement issued last Thursday in which he strongly criticised the decision to cut his funding.

“With everything going on at the moment, I cannot see myself competing at the World Championships in Moscow,” Colin told the Observer on Tuesday, “and unless something drastically changes this week, I think I have to pull the plug in terms of international competition this year. At this stage, too much energy has been consumed by this and no athlete should be put in this sitation”

However, Colin denied that the snub could see him retire from the sport - “I am still committed to my athletics career for the foreseeable future and I will have to concentrate on training and preparing for 2014. It did take a long time to pick myself up after the disappointment of London, I had committed to the new Olympic cycle but a decision like this sets you back again.”

The Ballinamore man also had harsh words for Athletics Ireland Performance Director Kevin Ankrom who Griffin claims refused to forward his name to the Irish Sports Council - “It is a very subjective decision and I repeatedly asked that there be some sort of arbitration or independent appeals procees.

“I even sent in another application before the January 4, deadline but I had no response to any of my emails. I hadn’t a chance to make my case and they effectively blocked off any chance to appeal the decision by the Sports Council.

“I have said that when it comes to public money, one person cannot make a decision like this, it should be considered by the High Performance Committee. Kevin Ankrom is well within his rights to put forward any case he wants but I should also be given my right to make an appeal on it, have my case heard by an independent panel and let them a decision.

“At the very last moment, I have been offered a small amount of €2,000 and told there could be further opportunities for funding but I don’t want to go into the World Championship under prepared. I think Kevin Ankrom sees me as a libability, he has never asked to see me or enquired about my training needs, he just doesn’t care.”

Colin admitted that his record of disqualifications in major championships is counting against him but feels that he had not received proper support from Kevin Ankrom - “One point I would make is that my Championship record does go against me with my disqualification but I believe it is the duty of the High Performance Director to provide technical support.

“In an event as technical as walking, you need someone watching you, analysing and guiding but all my requests for help have been ignored. Rob Heffernan (fourth in last year’s Olympic 50K) is four years older than myself and I think that my best performances are ahead of me. There is a window to improve year on year, I am not over the hill.

“Kevin Ankrom has never given me the chance – if he looked at it and said that this athlete is getting to championships, he has technical problems but with the right support, he might do something. We should be trying to encouraging athletes to put something back into the sport.”

Ironically, Colin has held meetings with the High Performance Director in his role as coach to Laura Reynolds, - “I just have to separate the two roles, my duty to Laura as a coach and my relationship with Kevin Ankrom. I’ve coached Laura for 11 years to a higher level of results that I have achieved myself.”