Drumshanbo bow out on the double 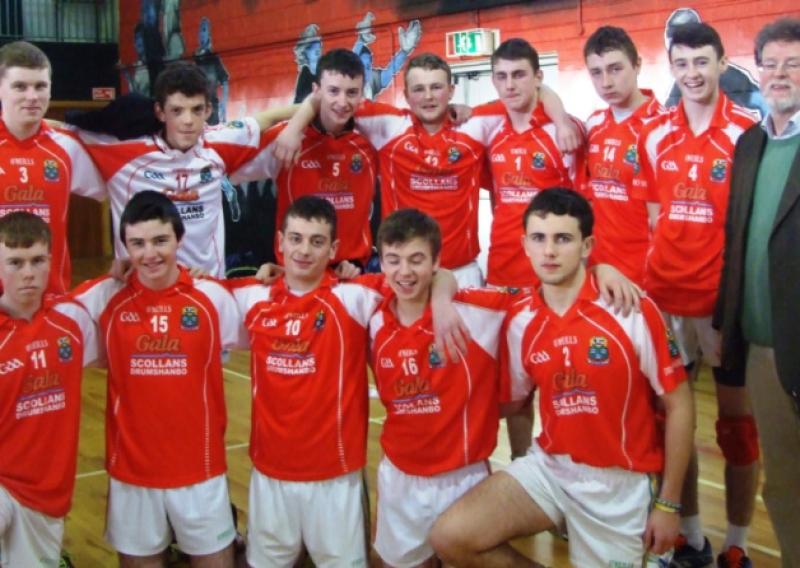 A very high class final rally in the A and a great comeback in the B were the best memories of the end of Drumshanbo VS’s involvement in the cadette volleyball 2014/15.

A very high class final rally in the A and a great comeback in the B were the best memories of the end of Drumshanbo VS’s involvement in the cadette volleyball 2014/15.

Injuries may have played a part but so did their opponents. The B captain Mark McMahon hurt himself during their warm-up. The A libero suffered an eye injury at school football two days before the games and was icing himself during the match.

Callum O’Hagan Moore went down in pain during the warm-up and, while Callum was being tended to, Luke Tuite severely tore ligaments, still at the warm-up! All in all – not ideal before the start.

B semi-final league: St. Brigid’s Loughrea B beat Drumshanbo B 25-15 23-25 25-8: The Bs opened superbly in the first point, did everthing right and lost it! They never played as confidently again. The first set was close up to 6-8. A great instinctual reaction from Adam McCarthy at 1-4 started a good period from Drumshanbo in the second set and they levelled at 7.

Winners at the net from Ray Gallagher from 9-12 had them level again by 13 and ahead at 16-15. Loughrea pulled ahead again by a few points and looked on the road to victory when McMahon, the captain, and their best hitter and sweeper, hit a run of four serves to take the set.

The final set was very close at 5-6 but then, despite the introduction of Brian Moran, Drumshanbo found the Loughrea serves too much.

B semi-final league: Mountrath CC beat Drumshanbo B 30-28 25-21: Down 2-7 it looked like form was still bad, but, with help from Daniel McLoughlin, Drumshanbo levelled at 8. Mountrath ran ahead again to 16-9 before Fergal Gilmartin had his best run of serves.

The great fightback continued under Gallagher serves and Drumshanbo levelled at 25 and got set point at 26. They saved two set points before losing. Heads went down at the start of the start of the final set although Darren Cull had typical saves and spikes set by Darren McTigue.

Trailing 12-21 things looked bleak. Then Shane McGrenaghan came on and his accurate sets steadied the team. Paddy Kelly aced as many a time, so much so that Mountrath breathed a sigh of relief when they finally won.

After the injury chaos Drumshanbo were immediately greeted in this match with a variety of hits, tips and dumps that had the outstanding libero defender Thomas McManus diving everywhere.

An outstanding rally at 5-7 featuring McManus, Jordan Earley and Kevin Moran was not followed by Drumshanbo dominance. There was a block winner from Fergal Guihen at 6-9 but Lougrea were edging further ahead all the time.

Then, just as all seemed lost at 15-23, Gareth Higgins hit a winner and followed with a run of five serves with Earley hitting winners at the net. A climax was reached at 20-24 when Moore was everywhere picking up the first ball and then smashing down three times but Loughrea held out.

Moran led the way in the second set with a block and spike putting Drumshanbo 2-0 up. Then they handed away the initiative with errors until a Moran block and a Kian Gibbons tip slowed things at 7-12. Gibbons had an outstanding serving year, never missing one serve in the competition.

Cian Beirne came on at 7-14, set well, and this was followed by a run of nine serves from Higgins to leave Drumshanbo ahead 16-15 and Loughrea on a time out. Amazingly, Loughrea roared on to 24-18 . Then Damien Duignan came on to a great cheer. His digs and hard hit led to the longest rally in the match.

Unfortunately Loughrea hit the winner and the favourites advanced. Drumshanbo were the only team to take off Brigids and much was expected. Perhaps the injuries took their toll.