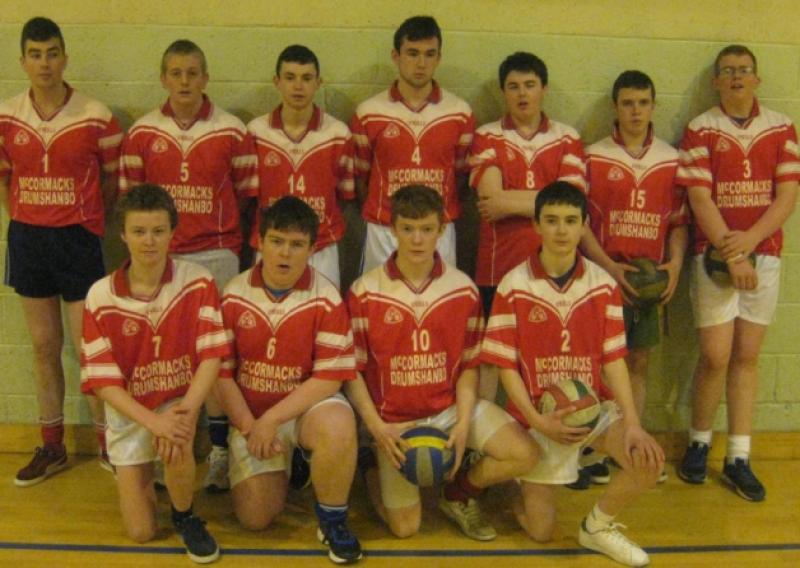 It was another great day for Drumshanbo VS volleyballers in Portmanock Dublin, 18 years after their last visit there.

It was another great day for Drumshanbo VS volleyballers in Portmanock Dublin, 18 years after their last visit there.

Never before have so many cadette boys played for the school in one season at away fixtures, as Drumshanbo B, C, and D teams went to the knockout blitz. All three teams did themselves proud.

Drumshanbo Ds: Having lost at home 0-2 to Drumshanbo A, B & C, it seemed the pattern was continuing when they trailed 10-13 in their opening set against Portmarnock B. Then Evan Gunning went on his first of three extraordinary runs of serve of the day. He hit 11 in a row and the D had won their first set.

Nathan Malone came on in the second set and got a great cheer after a winning spike at 13-13 and Ryan O’Connor surprised even himself with a classic save at 17-20. However as Drumshanbo emptied the benches Portmarnock sneaked their first set win.

Drumshanbo D now faced the taller, older, all conquering Castleblaney A who left them flat-footed in the first set. Then Gunning did it again, and his five serves lifted the Ds 11-5 ahead.

Blaney were also having to face captain Benjamin Saul who rested an injury in the first set. He spiked, tipped and made the Monaghan school fight very hard before they won the second set.

The D’s final game against Portmarnock B saw Gunning outdo himself as he served them 15-0 ahead. Cormac Lynch was everywhere, saving balls, flicking winners and giving great sets. Again the benches were emptied for the second set and the young Daire McManus played his part.

Good receiving from Alan Doran and hits from Daniel Scollan were features of this non travelling pair in their home matches).

Drumshanbo Cs: They had a dream start with Darren Hennessy hitting seven serves in their opening game against Portmarnock A. Mark Gillespie, an all rounder all day, served eight and the Cs led 20-4 at one stage. Captain Darren McTigue controlled all over court and was missed every time he was rested.

In the second set Gavin Flynn impressed with blocks and they had match point to win in straight sets. However it was a tribute to Drumshanbo that Portmarnock celebrated wildly when they won the second set.

Next came the match to decide second place in the competition against Blaney. Despite the best efforts of Brian McCormack, Cormac Reynolds and Cathal McKeon’s serves, only the very steady Conor Daly was a match for the Monaghan boys who won well.

In the Cs final game against Portmarnock B, Christian Wynne helped them to an easy first set win. In the second set despite great serving from Liam Rowan it was level at 19-19 when Brian Moran went to serve. Brian, steady throughout the day, served out the match ensuring third place for Drumshanbo C.

Drumshanbo Bs: Already with two home wins behind them, the Bs gave due notice of their serious intent when the serving of Fergal Gilmartin and Mark McMahon led to the trouncing of Portmarnock B in their opening set.

Emptying the bench for the second set sub Shane McGrenaghan showed the strength of the panel with a run of 12 serves.

Against Portmarnock A the first set was very tight and level up to 17. Then Adam McCarthy, always the safest man, served them into a three point lead. Raymond Gallagher added to that with flicks and spikes and added another great service run to the day when he hit a run of 12 in the second set.

Sean Prior finished off Port A with his serves which then led to clash of the two unbeaten teams Drumshanbo B and Castleblaney A:

Castleblaney took an early lead but here were long rallies. Drumshanbo hit many winners especially from Paddy Kelly who had 100% serve for the game. Daniel McLoughlin started the second set with crisp digging and his lethal aces turned 4-5 into a 10-5 lead.

Blaney rallied to 12-12 but McGrenaghan served Drumshanbo 18-12 ahead and the match was levelled. The deciding set was a thriller - level five times to 11-11 and Drumshanbo again levelled at 19-19.

Darren Cull, combing all day with McMahon, was spectacular in saving what looked like definite winners but the Monaghan boys just prevailed and topped the group. Again it was a tribute to Drumshanbo’s play that the Blaney players celebrated wildly after their win.

However Drumshanbo’s great performance ensured their place in the last 6 in the country.