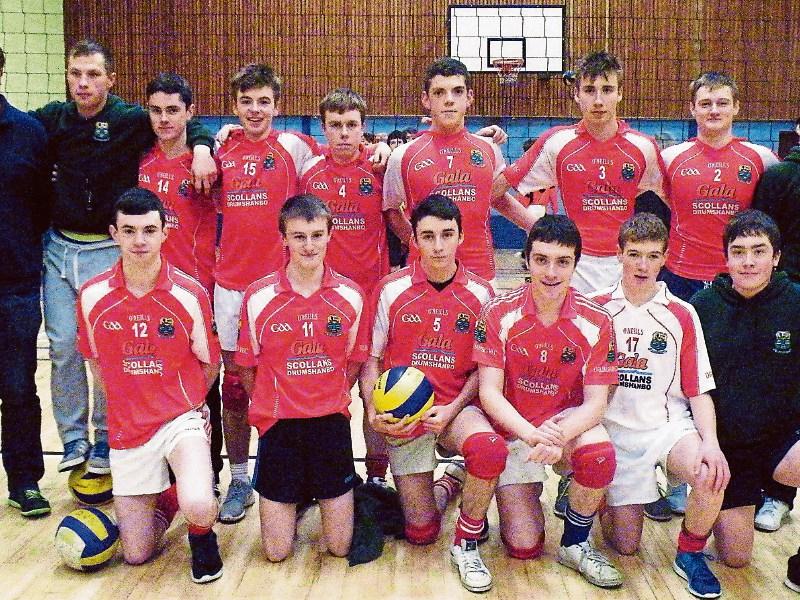 The setting of Bellengare Community Centre may be an unlikely one for an All-Ireland run but Aidan Shannon’s charges turned in a polished and powerful performance to storm to a 25-11, 25-15 victory and a place in the All-Ireland Final.

Drumshanbo face old rivals St. Brigid’s of Loughrea in the Final in UCD this Thursday at 1pm and on this form, the Leitrim school will take some beating as they were led by hugely impressive displays from the outstanding Caleb Duffy & Tomas McManus.

McManus was very impressive at the net against Elphin, showing some great touches and some clever finishing to find holes in the Elphin cover.

But the outstanding player on show was undoubtedly Duffy who gave a power-packed display - Elphin simply had no answer to his powerful drives and his athleticism at the net gave Drumshanbo a great platform on which to build.

Kian Gibbons also gave a great run of serves on a team where it was hard to pick out anyone who did not perform.

Elphin never got going against the Drumshanbo machine - the Roscommon school undoubtedly had skill and ability but they lacked the organisation and confidence on the ball, positioning and execution that was so obvious in the Drumshanbo ranks.

Small things like setting the ball behind a team-mate was in contrast to Drumshanbo who executed the basic skills efficiently and always gave a team-mate a great chance to land the score.

The first point came after an Elphin player crossed the net but it came after an incredibly long rally that featured two foot plays by the Roscommon school to save points but Duffy soon set his stamp on the same, smashing down a point.

Drumshanbo’s Cian Duffy hit three serves in a row to propel the Leitrim school into a three point lead. Elphin were keeping pace up to 11-7 but then Drumshanbo went into a higher gear, four unanswered points including a lovely feint from McManus.

Elphin pulled back a point but the pressure was telling as Drumshanbo landed three points through Elphin errors. Duffy had a huge smash for a point before Fergal Gilmartin’s long hit to the corner landed a great score and Drumshanbo took the first set on an Elphin serve that went into the net.

The second set started with Duffy scoring two early points, one a huge smash down the middle and the second a lovely tip to the corner over two jumping Elphin players. Gibbons produced a great shot into the corner to take the score to 5-2 in favour of Drumshanbo.

But then Elphin began to fight back, taking advantage of a bout of confusion in the Drumshanbo rear-guard to bring the scores to 6-5 and they had a great chance to level the score but Drumshanbo got a vital net call.

Drumshanbo followed up with three unanswered points and although Enda Killoran was providing stern resistance for the Elphin men, twice scoring lovely points, Duffy continued to power Drumshanbo ahead, the score going to 15-8.

Elphin staged a mini-rally to close the gap to eight points but with a huge smash from McManus, Drumshanbo soon had a 24-13 lead.

However, Drumshanbo were guilty of going for the spectacular winners, hitting the ball too long and into the net for Elphin points but their place in the All-Ireland Final wasn’t delayed for long as a over-long return saw them complete the victory.