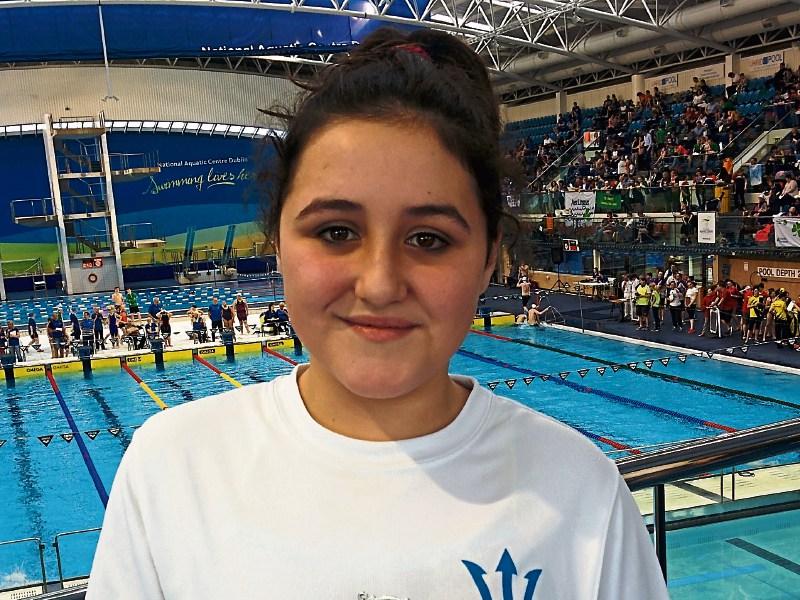 Last weekend marked another successful outing for members of Trident Swim Club when they travelled to the National Aquatic Centre in Dublin to take part in the Leinster Regional Gala.

Bringing home six medals as well as personal best times across the board, the club is going from strength to strength.

First to swim were Diarmuid Sutton and Luke Weaver in the 50 metre butterfly. Sutton put up an impressive time of 33.02 seconds to take the Grade 3 gold medal with team-mate Weaver knocking almost 2 seconds off his personal best to take Grade 1 silver in a time of 31.20 seconds.

The Trident girls were up next in the 50 metre backstroke with 8 year old Ella McKeon doing a time of 53.87 seconds and team-mate Ella Guckian coming home in a time of 56.69 seconds. Aoife McCormack took silver in a time of 49.75 seconds to complete this event.

Eoin Guckian knocked over four seconds off his entry time in the 100m breaststroke, winning his heat and bagging himself an 'A' standard with his time of 1:39.95 and this was followed by the 50 metre freestyle event, with Benedict Murphy putting up a time of 46.73.

The morning's events ended with Weaver taking Grade 1 bronze in the 100 metre backstroke after knocking almost 2 seconds off his entry time to finish in yet another Division 1 time of 1:09.95.

Opening the afternoon session with the boys' 100m individual medley were Eoin Guckian who swam the event in 1:32.33 seconds and Diarmuid Sutton who swam another pb of 1:14.40 seconds.

Eoin Guckian &d Luke Weaver both swam the 50m backstroke with a 4 second improvement for Guckian who swam the race in 42.33 seconds and a personal best of 32.95 seconds for Luke Weaver who knocked over a second off his entry time and took the gold medal in this event.

The Trident trio of girls swam the 50m freestyle next, with Ella McKeon swimming 57.49, Ella Guckian swimming 48.84 seconds and Aoife McCormack finishing with a time of 42.09, knocking almost 4 seconds off her entry time.

Luke Weaver completed his medal haul for the day with a bronze in the 100 metre butterfly when he wiped off a whopping 6.5 seconds to post yet another pb with his time of 1:09.91 and Benedict Murphy ended the day on a high for Trident with his time of 1:01.24 in the 50 metre breaststroke.

Trident swimmers have made a strong start to 2016 and will be kept busy over the coming weeks with a demanding training schedule to ensure they perform to the best of their ability at the meets ahead of them.

Trident welcomes new members and if you are an ambitious swimmer who aspires to compete at the highest level, we would like to hear from you. For more information, call 086-859-4497.