Dominant Eanna storms to U23 title 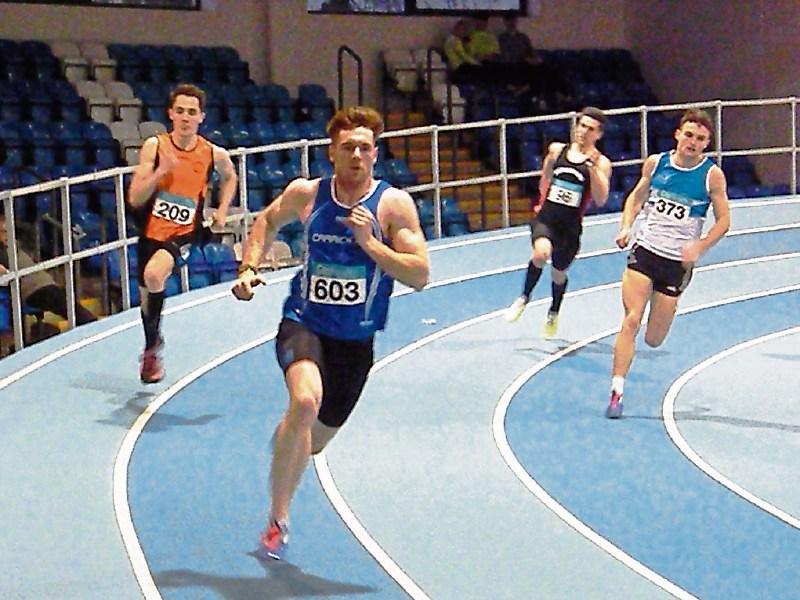 Eanna Madden produced one of his most dominant performances as he stormed to victory in Athlone in the GloHealth Athletics Ireland U23 Indoor 400m Final last Sunday.

The Carrick-on-Shannon AC sprinter took control from the gun and was never headed in a dominant display that underlines a strong winter’s work behind him.

Eanna established himself as the favourite in Sunday’s heats as he cruised around his race and breaking the 50 second barrier to qualify second fastest for the final behind training mate Paul White of Nenagh.

Drawn in lane five, the Mohill man took control early on as he sped through the halfway stage. Briefly challenged by White down the back-straight, Eanna still had the power to pull away to a decisive win in the final 100m.

Ballinamore AC’s Sibeal Reynolds finished ninth in Junior Women’s Long Jump with a best of 4.54m. Sibeal opened with 4.49, marginally improved to 4.52 in the second round before registering 4.54 in the final round.

Carrick’s Cathal McElgunn and Callum were also in action in the sprints, Cathal recording a time of 23.93 in the U23 200m while Callum set a new personal best of 7.86 seconds in the Junior 60m heats.

The indoor action continues next week with Carrick AC’s international duo Eanna Madden and Gerard O’Donnell due to compete in the AAI Games on Sunday while clubmates Joanna Duignan, Cathal McElgunn, Callum Whelan and Christina Beirne will also be in action.

O’Rourke was Leitrim’s sole medalist of any kind as she led from gun to tape to win the Minor Girls event. The Ballinamore runner started very fast and built up a big lead over the very muddy course. Ellie had a substantial lead but the Fenagh girl still had to show good strength in the final stages to preserve her lead.

Ellie will be joined in the Connacht Finals by school-mate Kate Gilheaney while the St. Clare’s team of Rachel McPartlin, Caoimhe Hughes, Rachel Conlon, Roisin McManus & Lara Mulvey were third in the Minor Girls team race with 57 points behind Sacred Heart Westport (25) and St. Joseph’s Castlebar (29).

Carrick CS’s Evan Corcoran was the only qualifier in the Minor Boys race as he produced a remarkably strong run in ninth place. His team-mate Ryan Mulligan just missed out while Daniel Bosquette also endured the tough conditions.

In the Junior boys, Carrick CS duo Eoghan Farrell & Fionn O’Brien overcame the tough conditions to finish ninth and tenth. Farrell started stronger but suffered over the second half with O’Brien closing the gap and he was closing fast over the final stages.

Fiachra Henry was Leitrim’s only qualifier in the Intermediate Boys race, finishing 21st in a very tough race to reach the Connacht Finals.

In the Senior Boys race, Leitrim schools provided three finishers with Drumshanbo VS’s All-Ireland Volleyball Cadette A Final Man of the Match Caleb Duffy showing a different sporting prowess as he qualified along with school-mate Sam Flynn and they will be joined in the Connacht Finals by St. Clare’s Kyle Harte.

The event primarily caters for younger age groups with events in sprints, distances, relays, throws and jumps for U9, 10, 11, 12 & 14 boys and girls. Registration at 1.30.