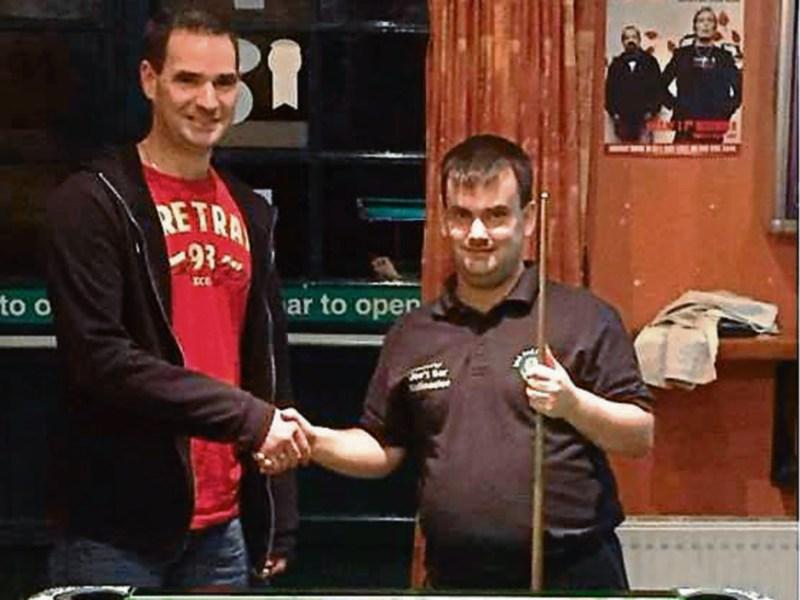 Last weekend, the third of the Leitrim Pool Associations Tour Championships took place with a brilliant turnout to the first tour championship of the 2016 pool year.

After two days of pool we are down to our Final four of tour 3, they are: Maurice Cullen vs Hugh Kielty and Gavin Donnelly vs Niall Sweeney

In the last 16, Gavin Donnelly beat Paddy Brady 5-1 while Darren Phillips beat Tommy Kelly 5-2, Darren played very well throughout the day to make it to the Quarter final stages of the competition.

In the only 5-4 scoreline in the last 16, David McWeeney beat Jeremiah Coulter coming from 4-1 down while Maurice Cullen beat Martin Shanagher 5-2.

Moving onto the Quarter Finals, Hugh Kielty beat Darren Phillips 5-3 in what was a tight battle at 3-3. Maurice Cullen conquered Wayne Kilmartin 5-1, Niall Sweeney did the same to David McWeeney and a battle of the over 40s, Gavin Donnelly beat John McKenna 5-2.

Maurice, Niall, Gavin and Hugh all played excellent pool throughout the weekend to make it to this stage, well done to all! We would also like to thank everyone who came out as we had a brilliant turnout probably our best turnout yet.

In the final of the previous Tour, Niall Sweeney faced Wayne Kilmartin in a very entertaining match with brilliant finishing and tactical play. Niall went 3-1 up in the final and throughout always seemed to be able to keep that one or two frame cushion, in the end Niall won 7-4.

In the final it was battle between two friends Paul and Alan in the end Paul showed his class dispatching Alan 3-1, well done Paul and Alan!

All Ireland Semi Final: Leitrim will face Westmeath in the Newbury Hotel in Mullingar on April 2. Both Semi Finals will take place on the same day meaning that there will be an electric atmosphere during the games and will make the occasions more memorable.

To add to this brilliant day of Semi Final action the Final of this Competition will also take place the same day but will be early evening before it will be played. This will give everyone a chance to enjoy the event and have the option of staying over if they wish!

All Leitrim Supporters are welcome and their support for the lads would be greatly appreciated, it’s not too far away so we should see a lot of support this time round!

Well done to all the winners, the Leitrim Pool Association want to thank everyone who supported the fundraiser, the money raised is greatly appreciated and thanks to the sellers it's a tough job but a very important one so thank you.

Leitrim Pool is being strongly represented at a variety of age categories, Jamie Gaffney is captaining the Irish Under 23 team over there, Oisin O’Connor is a part of the Irish Junior squad going to France and JJ McVeigh is a part of the Over 50 squad making their way to France.