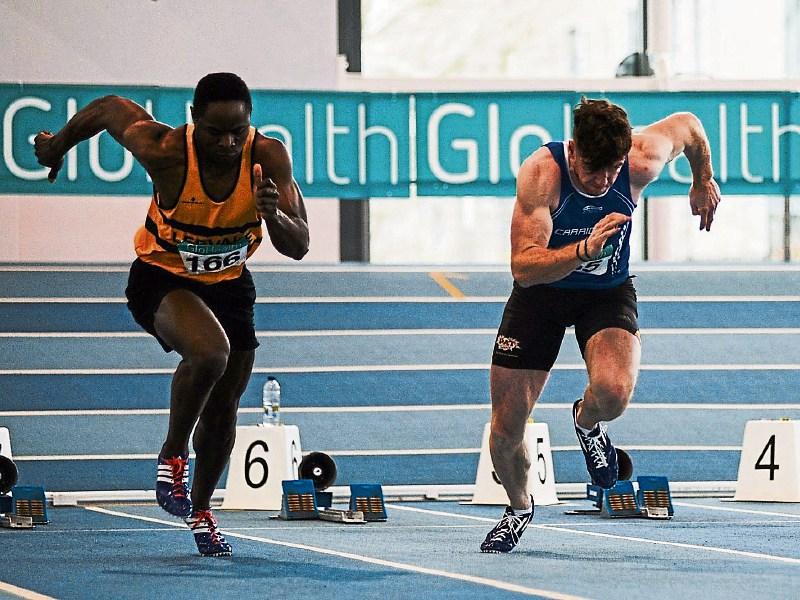 Leitrim athletes were on form last Sunday at the AAI Indoor Games in Athlone with Eanna Madden breaking into the top ten of Irish All-Time performances in the indoor 200m.

Madden and Carrick-on-Shannon AC clubmate Gerard O’Donnell were winners in Athlone, the Mohill sprinter winning the 200m with O’Donnell taking the 60m Hurdles in his first outing of 2016.

There were also a series of personal bests for some of the county’s younger athletes while Ballinamore AC’s Sibeal Reynolds finished third in the Long Jump.

At home, it was a very busy day as Ballinamore hosted a huge crowd at the Leitrim Indoors with strong displays from the county’s five clubs. Unfortunately, results were not available at the time of going to press.

It was a busy day for Madden who recorded two personal bests over 60m before he broke new ground in the 200m. Despite a bad start, Eanna ran a new pb of 6.96 to finish fourth in his race before then going even faster in a second race, running 6.91 to rank him 29th in the all-time list and third in the 2016 lists.

However, those performances were eclipsed with a comprehensive win in the 200m, his time of 21.50 marginally outside his outright pb for the distance but, more importantly, a time that ranks him tenth in the all-time Irish Indoor lists.

It continues his rich vein of form in 2016 as Eanna has set significant personal bests over 60m, 200m and 400m as well as winning the National U23 400m. The Mohill man will be in action on Friday in the Irish Universities Indoors in Athlone.

Gerard O’Donnell made his first competitive start of 2016 and returned with a comprehensive win over the 60m Hurdles, his time of 8.01 seconds only marginally slower than his breakthrough 7.99 of last year.

The Carrick AC hurdler had an injury hit lead-up to his first race and even changed his hurdle approach back to eight steps from seven and O’Donnell will take huge satisfaction from a very solid opening that hints at a good season ahead.

Ballinamore AC’s Sibeal Reynolds also made the podium in Athlone, finishing second in the Women’s Long Jump, her first round jump of 4.88m a significant improvement on her form from the Junior Championships. Sibeal also jumped 4.50 in her second jump and finished with 4.86m as she can look forward to the Juvenile Indoors with confidence.

Carrick AC’s Callum Whelan also set a new personal best over 60m, running 7.77 and 7.80 in his two outings while Christina Beirne ran two identical times of 8.35 in her two outings.

Cathal McElgunn ran a season’s best of 53.18 in his 400m race and will be in action in the University Indoors on Friday.

Joanna Duignan made a solid return to action with a time of 60.96 in the Women’s 400m but it was a bittersweet one as she suffered a serious foot injury over the second half of the race and faces a prolonged spell on the sidelines.