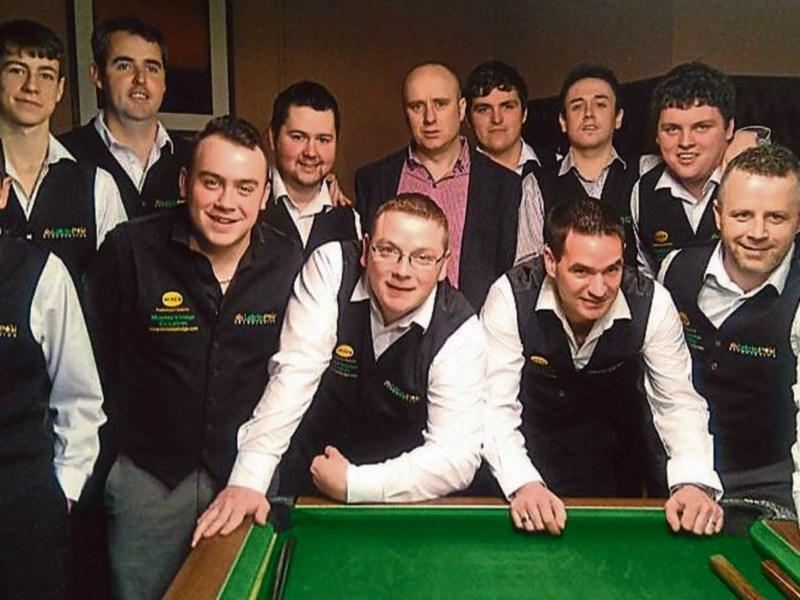 Last Saturday the Leitrim Pool Men’s team travelled to the Newbury Hotel in Mullingar to face Mayo in the Semi Final of the All Ireland Knockout Cup.

The Match went down to the wire where Leitrim unfortunately lost to Mayo in a decider 13-14.

This was a massive session of pool giving Leitrim a 7-2 lead going into the second session, a session of Doubles pool where Leitrim and Mayo shared the first frames with wins from McWeeney / Kielty, Donnelly/Crossan and Gaffney/ McSharry.

This had the score line at 10-5 with three frames left in the second session. To Leitrim’s disappointment, Mayo took the last three frames leaving the score at 10-8 Leitrim leading by two going into the last session.

The last session started with Mayo levelling the score line by winning the first two frames, 10-10. It was tit for tat the whole session with Kevin McWeeney making it 11-10 Leitrim, Donnelly making it 12-11 Leitrim and John McKenna bringing it to a decider 13-13.

In the decider it was a very tight affair with Hugh Kielty vs Patrick Higgins, unfortunately Leitrim fell short of the finishing line losing 14-13.

Although Leitrim were disappointed with the outcome of the match, they have proven the standard they play at by beat the 2014 champions Tyrone and 2015 runner ups Wexford on the way to the final and narrowly losing to the eventual winners Mayo in the semi-final.

In the other semi-final, Dublin beat Meath 14-8 but in the final Mayo took a massive lead 9-4 and kept that lead for the remainder of the match easily winning the final on a 14-7 score line.

Well done to all four teams involved, in particular well done to Mayo on becoming the first winners of the All Ireland Knockout Cup. The venue was exceptional with four brilliant supreme pool tables playing at the highest standard, well done to the Westmeath Pool Association for setting up the tables and for the food provided to all teams and spectators on the day.

Finally a massive thank you to all the supporters that attended the event to support the pool team in the Semi Final and throughout the event.

In the Semi Finals, Taylor’s went into the second leg with a 10-5 lead over Gerties, Taylor's won the first session 3-2 , extending their lead to 13-7, in the second session Taylor's closed out the match winning on the night 6-3, overall score 16-8.

In the other semi-final was a much tighter affair The Leitrim Inn came into the second leg with the narrowest of leads 8-7 over Carthy's. Carthy's didn’t take long to level the score line and it was tit for tat at 11-11.

Both teams shared the next 4 frames at 13-13. The Leitrim Inn took the lead at 14-13, and added to that with another frame 15-13, Carthy's returned with a frame 15-14. It was down to a decider if Carthy's won the match went to a third night if the Leitrim Inn won they advanced to the final and in a very tight tactical affair The Leitrim Inn Scraped the win of 16-14 over last year’s Champions Carthy’s.

Well done to Taylor’s and The Leitrim Inn for making the final as well as Gerties and Carthy’s for making the semi-finals of a very competitive league.

In the Shield Semi Finals Monica’s won the second leg 6-1, beating Keegan’s 16-6 overall. In the First leg of the other Semi Final first leg Ging's have a lead of 10-5 over Duignan's.

This weekend, the sixth and final LPA Tour championship will take place in the Drumshanbo Pool Hall.

Entries are now being taken, to enter just text your name to Dave on 087 6490835 by Thursday April 7, where the draw will take place. Following the draw entrants will be notified of their time via text.

Also this weekend the semi-finals and final of the fifth tour will take place on Saturday with the semi-final line up of: Jamie Gaffney vs Oisin O’Connor; Gavin Donnelly vs Dave McWeeney

Best of luck to all involved!