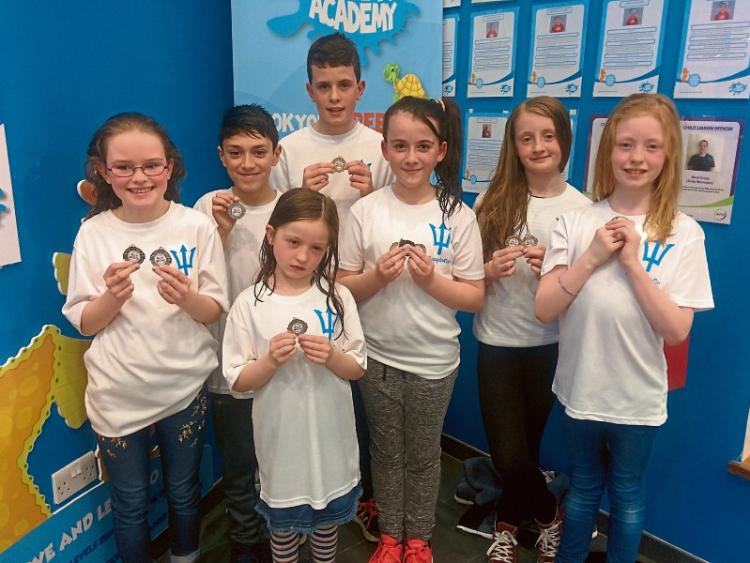 With representation in most age groups, the Trident team were a force to be reckoned with in the water, giving their opponents plenty to think about.

The Under 10 category saw two Trident swimmers go head to head in the 25M backstroke, with a battle for first place between Ella McKeon (Drumcong) and Molly Mulvey (Carrick) but it was Ella who made it to the finish line first, becoming the first Trident swimmer to qualify for the All Ireland Finals, with Molly hot on her heels to take silver.

At Under 12, three Trident girls took to the water in the 50M Freestyle, with Grace Harding (Drumshanbo) narrowly missing out on All-Ireland qualification to take silver, and Ella McCrann (Ballinamore) taking bronze for third place, with Anna-Rose McLoughlin a close fourth.

Ben Murphy put in a strong performance in the Under12 50M Breaststroke and was rewarded with a silver medal for his efforts, while Ella Guckian (Drumshanbo) sailed through the heats for the Under 12 50M Backstroke with ease, and went on to take silver in a tight final, missing gold by millimetres. Her older brother, Eoin, went on to take gold in the boys’ U14 50M Backstroke, giving the club another All-Ireland qualifier in the process.

Congratulations to all Trident swimmers taking part in this event, and good luck in August to those who qualified for the National Finals.

Elsewhere in the club, Trident members Luke Weaver and Diarmuid Sutton were taking part in the ‘A’ Standard Gala in Claremorris. Both boys competed in the 200M Freestyle and 200M Breaststroke events, with Weaver gaining a 5 second PB in the Freestyle, to bring his time down to 2:14.57 and Sutton taking silver in the 13 and under category, with a time of 2:20.28.

In the Breaststroke event, Weaver knocked 8 seconds off his entry time to record a time of 2:51.76, and Sutton bagged himself another silver medal with a PB of 7 seconds to come home in 2:54.61 and gain another Irish Division 1 time ahead of the summer nationals in July.

Trident Swim Club is led by Head Coach Samantha Weaver and trains regularly at Aura Leitrim Leisure. The club has a proven track record in qualifying swimmers for both national and international competitions.

For more information, contact us on 086 859 4497, or find us on Facebook at Trident Swim Club Carrick on Shannon.

Fire service at scene in Leitrim