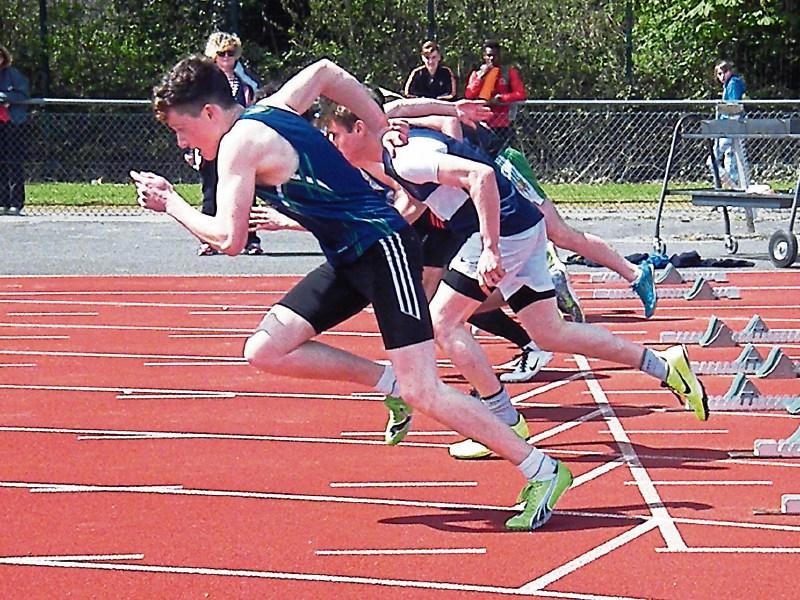 Leitrim's Eanna Madden & Gerard O’Donnell had a mixed day at the Belfast International despite both turning in good performances in tough conditions.

Madden ran his second fastest time ever for the 100m when he stormed to a clear cut win, his time of 10.67 marginally slower than his pb of 10.65. However, the Mohill man suffered a hamstring strain which may rule him out of action for several weeks and hamper his bid to achieve a qualifying time for the European outdoors.

Hurdler Gerard O’Donnell ran two races in the wet conditions, first recording a time of 14.23 into a 0.8 m/s headwind to finish fifth. The Carrick AC man went faster again in the second race, despite giving the first hurdle a heavy wallop.

Gerard somehow got his rhythm back and stormed over the final five hurdles to record a time of 14.15 into a stronger 1.7 m/s headwind, only denied second by the photo finish.

l The county’s younger athletes turned in some excellent displays at the North Connacht Schools in Sligo.

Ballinamore PPS’s Ellie O’Rourke was one of the most impressive winners on the day, winning the Minor Girls 1,500m by well over 100m while Drumshanbo VS’s Anna Corcoran also had a clear cut victory in the Inter 1,500m.

Carrick Community School had a very successful day with Elise Bruen & Tom McCabe scoring a Senior 400m double while both took second in the 200m.

Jamie Sweeney from Ballinamore PPS showed huge potential when piping Callum Whelan for third in the Senior 100m, Whelan also finishing third in the javelin. Dara Morahan (Carrick) took 2nd in the 100m and third in the 200m

Carrick’s Oliver Charles was third in the Minor Long Jump and 4th in the 100m.

All those who qualified plus a number of other athletes will be in action in the Aviva Connacht Finals in Athlone on Thursday, May 19.