Volleyball Schools U16 All Island Final 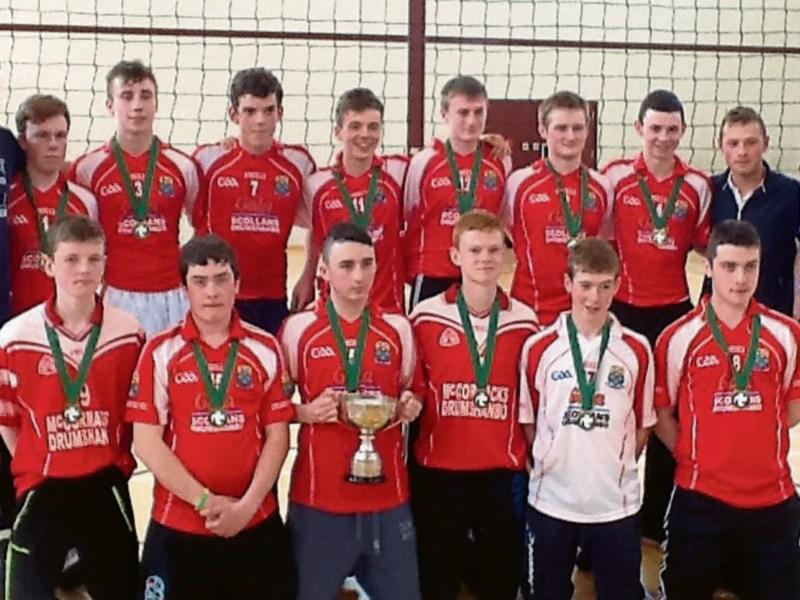 Drumshanbo Cadettes lifted back up the spirit of the school with a fabulous come-back win over possibly the top overall school on the island of Ireland.

It was a thriller in Lisnaskea on Monday as Drumshanbo finally beat Portadown. Portadown beat Drumshanbo the last time Drumshanbo represented the VAI against the Northern Ireland school champions in the 2005 senior final.

Portadown came with a big reputation and shocked Drumshanbo with a 5-0 lead at the start of the match. But, set up by super setter Kian Gibbons, Caleb Duffy hit his first winning spike of the day to break the run. Still Drumshanbo trailed 5-10 , 6-11 and 8-13.

A great save from Captain Mark McMahon started the trend. Fergal Gilmartin hit lethal serves and closed the gap to 12-13. At 12-15 the set reached a peak. Duffy dumped down the ball, Portadown scrambled, he hit a super powerful spike, they scrambled up the ball again, he dumped. Again they scrambled up, then he turned a spike down in a total change of direction and Drumshanbo won the point.

The very next point Portadown scrambled through a 27 touch rally but this time they hit the rasping winner. A serving run by Gibbons brought Drumshanbo to 16-17 and a Portadown miss brought it to 17-18.

Then a run of four serves from McMahon brought Drumshanbo 21-18 ahead and a Tomás McManus dump brought them to 22-19. There followed a 43 touch rally which had three outstanding spikes including an amazing one from Raymond Gallagher but Portadown won the point.

Then Portadown found space at the back of Drumshanbo and levelled at 22-22. Duffy blocked to give Drumshanbo a 23-22 lead but Portadown showed how good they were with a spike winner and two blocks to take the set.

That was the first set Drumshanbo lost all year but instead of being shocked, they that came out all guns blazing in the second.

The Portadown hit back. Aces, serves dropped short, long balls to the back and the game levelled at 17-17. Cian Beirne came on but it took Drumshanbo time to adjust. Gallagher hit a spike off the block but Portadown aced to 21-21. This Drumshanbo though did not fold. Duffy aced to 23-22. Portadown called a timeout but Gibbons aced to level the match.

In the final set, Portadown raced 6-2 ahead, also leading 11-7. But the Drumshanbo started their relentless climb to victory. McManus dumped a winner and served seven in a row with three aces.

With Gibbons on setting, Duffy spiked three and dumped one and blocked one winner. Drumshanbo led 14-11. Again Portadown rallied again with their own dump winners to level at 14-14.

Then came the rally of the match. McManus stuck out his arm to save a ripping spike. The ball bounced towards the wall but Beirne got to it and kicked it over his head towards the net. There Duffy connected.

McManus again saved and a cool Gilmartin dug it high in the air to relieve the pressure. Finally Duffy dumped the winner after 25 touches.

Then came Gilmartin’s serve. He aced. A great Portadown block saw Duffy and Beirne scramble the ball up and Gallagher had to use all his power to hit deep from the back court to get the ball over the net. Eventually Duffy hit the winner and it was 19-15.

All six were involved before Duffy’s next winner and Gilmartin serve kept Portadown on the back foot. By the time Gilmartin stopped serving it was 23-15 and despite some great hits Portadown finally capitulated.

This Drumshanbo team can now stand up with the great Drumshanbo cadette teams of the past. Drumshanbo have played in three U16 All Island finals and are the only unbeaten school in these finals, Portadown were the best Northern team they had met.