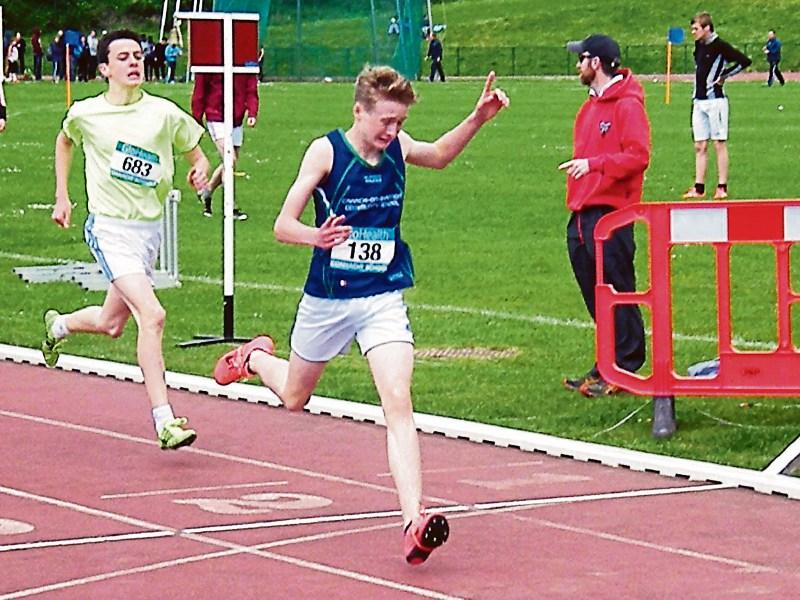 With the news that Leitrim has a new Olympian in Breege Connolly, the future of the county's athletes looks bright with a host of won at last Thursday's Aviva Connacht Schools Track & Field Finals.

There were a lot of impressive winners, none more so than Elise Bruen who won the Senior 400m by over two seconds in a time of 62.8 in very windy conditions. Elise had earlier finished 4th in the 200m ahead of team-mate Dara Morahan who finished 4th in the 100m.

Evan Corcoran and Oisin Kearney both impressed in their Minor boys victory. Evan ran a perfect tactical race, making use of the conditions as he held off the opposition for a hard fought win. Oisin made light of his lane eight placement and won his 200m in an impressive 26.62 seconds.

St. Clare's Shannon O'Hagan was very busy as the St. Clare’s thrower won the Junior Javelin with a throw of 30.35m, over a metre clear of second, with Carrick CS’s Caitlin Surlis in third with 25.37m. Shannon also finished third in the Shot with 10.12m with Caitlin fourth with 9.33m.

Mohill’s Eoin Gaffey had a tough day in the Junior Boys walk, finishing second behind Oisin Lane of Ballymahon. Gaffey’s cause was not helped by a couple of warnings from the judges as he recorded 6.13.7 behind Lane’s 5.38.9.

His Mohill Community College team-mate Sibeal Reynolds was literally less than an inch from victory in the Inter Girls Long Jump. Sibeal jumped 4.93m but was denied victory by Amy Greally from Ballyhaunis who jumped 4.95m.

Carrick CS’s Fiachra O’Dowd ran an impressive 24.11 to take second in a very windy Inter boys 200m but he was outside the medals in the 100m.

Ballinamore’s Ellie O’Rourke took off at a strong pace in a bid to stay with Rebecca Lowe of Our Lady’s Bower. The Athlone runner maintained her advantage but Ellie put in a very strong display to finish a clear second.

Carrick CS’s Ellis Conway showed great determination to battle her way to the bronze medal in the Intermediate 300m with schoolmate Kasey Bruen sixth. Ellis had earlier finished 7th in the 200m but still had another year in the age group.

Tom McCabe was desperately unlucky not to take third in the Senior 400m, finishing like a train but missing out by 0.11 of a second for third place while Cian Singleton was fourth in the javelin with 26.55m, just 39 centimetres from a place a bronze medal.

Carrick Community School also picked up a pair of relay medals - their Minor boys team of Ollie Charles, Evan Corcoran, Daniel Bosquette and Oisin Kearney were always in the qualifying places as they finished second behind Summerhill of Sligo with 54.08 to 53.46 and ahead of St. Enda’s 55.68.

The Inter Girls team of Clodagh Sheerin, Shauna McCabe, Kasey Bruen and Ellis Conway were always right in contention but Abbey Boyle overhauled them to take the second place, Carrick holding onto third by 0.12 ahead of Ballyhaunis.

Mohill’s Alannah McGuinness was fourth in the Junior Hurdles, Carrick’s Callum Whelan fifth in the Senior Javelin and 7th in the 100m.

One of the most intriguing and promising athletes on the day was Ballinamore CS’s Jamie Sweeney who ran an impressive 11.97 to take fourth in the Senior 100m, a raw unpolished gem that has real potential.

There were also some good displays from Laoise Fee in the Minor girls 800m while Kyle McNabola made a brave attempt in the Inter 800m.

The All-Ireland Schools Finals will be held in Tullamore on Saturday, June 4.