"The best running week of my life" 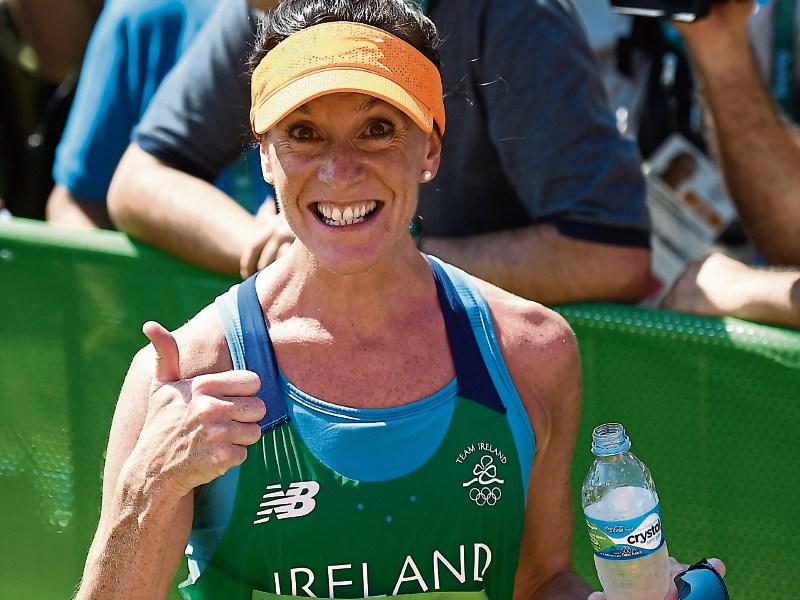 The smile said it all. As Breege Connolly crossed the line in Rio de Janeiro last Sunday after 26.2 miles, she broke into an elated, exhausted grin.

The 38-year-old from Kinlough had just defied the odds, the rankings and the advancing years to finish 76th in the Olympic marathon in 2:44:41.

If that sounds like an unexceptional finishing position, consider this: 156 athletes toed the line that morning in Rio’s Sambodromo, most of whom had personal bests much quicker than Connolly, who only ran her first marathon at the age of 34.

Minutes later, as Connolly limped her way through the mixed zone, she was quick to pay credit to her legions of supporters back home. “I’m a proud Leitrim woman and I know they’ll all be at home watching on the television,” she said, “They’ve been the best supporters, bar none.”

Indeed Connolly also had plenty of support on the course in Rio. Her brothers, Matt and Donal, her mother, Maureen, and her Aunt, Una, were among those shouting their encouragement as she made her way around the 26.2-mile course in brutally hot conditions.

The toll on all competitors was visible at the end, as one by one they made their way through looking a beaten docket. In comparison, Connolly cut a distinctly beaming figure, but much of that was down to the pride she felt at becoming Leitrim’s fifth Olympian.

“My body feels great,” she said. “I’m sure I’ll be tired afterwards but I’m high on adrenaline.”

Connolly had prepared specifically for the heat she would face in Rio by completing warm weather training stints in Portugal over the summer, but she admitted last weekend that the build-up had been stressful on occasion.

“If I’m honest I don’t think there’s anything you can do to prepare you for racing in that,” she said. “But that was my biggest thing today, to fight on no matter what the conditions were like. It was really hard during the summer, the pressures of training and worrying about my performances, but this was the best running week of my life.”

The race itself was not without hiccups. Connolly felt a sharp pain in the peroneal muscle by her shin just after the halfway mark, a problem that soon saw her hitting the panic button.

“I got a wee cramp in my muscle and I thought: ‘will I stop?’ because I know the Irish physio was out on the course and could have treated it, but I thought: ‘no, if you stop you could be in danger’, so I just forgot about it and ploughed on.”

Connolly started the race conservatively, passing 10km in 37:43, which put her in 114th place. She passed halfway in 1:20:02 in 98th position, and by that stage, despite the growing fatigue, she was on a roll.

“It got hard from mile 18 onwards,” she admitted. “It was getting warmer as well. It gave me spirit passing all the supporters out there and it’s always good passing athletes towards the end.”

At the finish, Connolly stormed across the line full of pride, and with good cause. For an athlete who only took up the sport a few years ago, and one who was several years older than most of her competitors, it was a run of outstanding quality.

True as that may be, Connolly is disproving the theory that athletes should slow down in their late 30s, and for that she has to thank a rigorous training programme and the guidance of her two coaches, Paul Elliott and Martin Deane.

“They’re two fantastic men,” she said. “I enjoy all the training so I don’t even know if you could call it hard work. You just have to do the miles and put in the grind.”

It took years of hard slog, but last weekend in Rio, they paid off in style. She’d never felt as proud.

Sunday’s race was run in torrid heat and humidity and it took the toll on times as athletes slowed dramatically over the second half of the 26.2 miles. Breege’s first 5Km saw her in 121st place as she crossed the timing mat in 19.01 but from then on, the Kinlough runner cut through the field.

Breege’s fastest 5K split followed as she was timed at 18.42 as she went through 10Km in an impressive 37.43, a time that would have won last Friday’s Ballinamore Festival 10K outright and that was with another 20 miles to go!

Top Irish finisher was double Fionnuala McCormack who recorded an excellent time of 2.31.32 to finish in 20th place, setting a new personal best in the process. Cork’s Lizzie Lee also found the conditions tough as she finished 57th in a time of 2.39.57 as all three Irish runners followed the same tactic of moving up through the field as the race progressed.

Congratulations to Breege on her great performance from everyone associated with the Leitrim Observer.