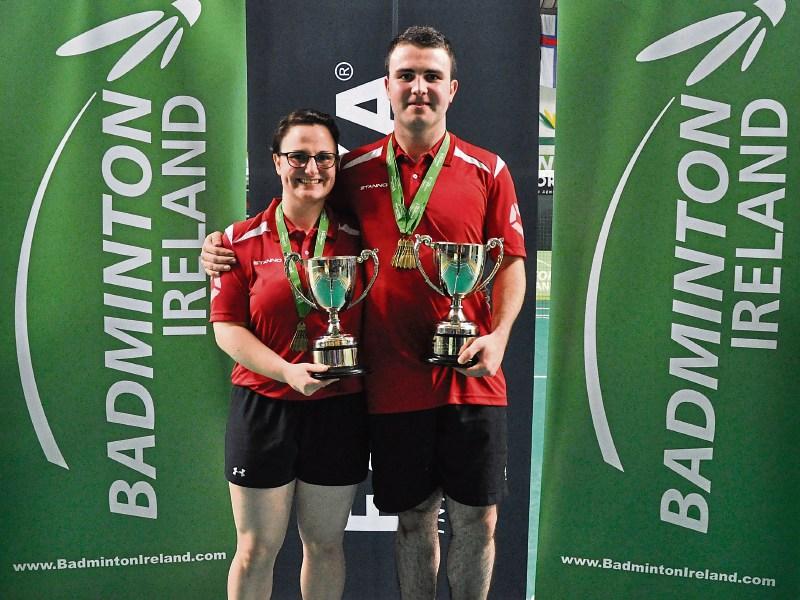 Claire and John Finnegan from Aughavas with their All-Ireland trophies

It has been a winning start to the competitive badminton season for sister and brother, Clare and John Finnegan, from Aughavas as they have already won two All-Ireland badminton titles and an Open Leinster title in month of November.

Irish badminton is divided into nine grades and after the disappointment of losing out in the mixed All-Ireland Grade ‘C’ final last year they returned to Baldoyle over the Halloween weekend to lift the title for the first time.

After two days play the pair had not dropped a set before the final. In the first set of the best of three decider it looked like they were about to meet their match when they trailed 13-20 but they showed no sign of nerves as they won nine straight points to take the set 22-20. They then maintained their 100% record for the championship by winning the second set 21-17.

It was a double victory for John, as earlier in the day, he and his partner Declan Bennett from Kilkenny, had lifted the Men’s All-Ireland doubles title in a very tight three set final.

Over the past weekend the Leitrim pair stepped up the grades to take part in the Leinster Yonex Grade ‘A’ Open. With their respective partners, both of them bowed at the semi finals of the level doubles, however, together they reached the final of the mixed.

Debuting in their first Grade ‘A’ final, they lost the first set and had to serve to stay in the match before winning a second set tie break 22-20. In the third set they managed to keep themselves two points ahead from the start before taking it 21-17, and with it their first Open Grade ‘A’ title.