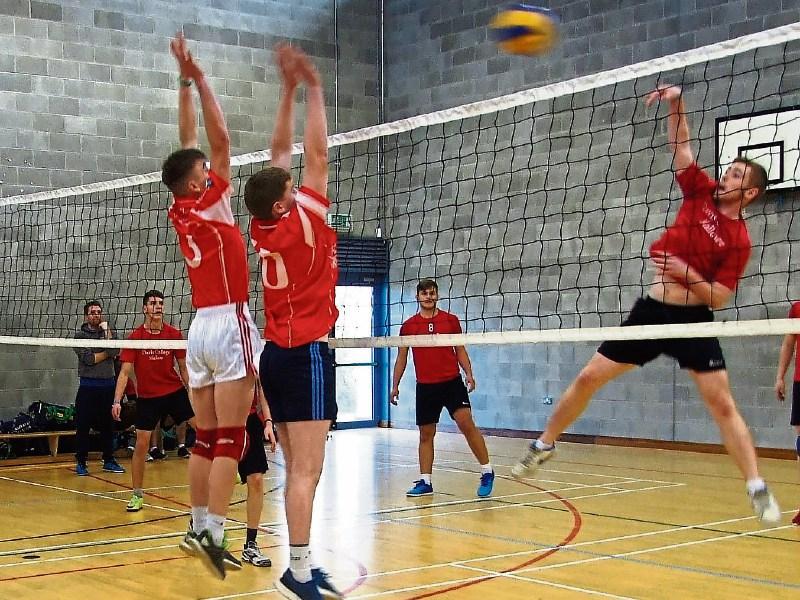 Two Drumshanbo player leap high to block a spike from an opponent.

Depleted of three players that featured in earlier rounds, Drumshanbo Vocational School volleyballers recovered from an early loss to defeat three of the top seven schools in a row and qualify for their record 22nd Senior A semi-final.

The three schools were from three different provinces and due to industrial disputes the matches were condensed into the one day with one set to 30 points deciding all, swapping sides at 15.

This was a baptism of fire. This Mallow squad, superb three years ago in Junior but caught by the age restrictions at cadette, have re-emerged, mostly a year older than the Drumshanbo squad.

On the day, they had just beaten the two Loughrea schools back to back which had never happened before this century at Senior A and were coming to this match warmed up against a Drumshanbo squad not long off the bus.

Still Drumshanbo came back from 0-3 and even led as late as 12-10 and 13-12. Signs were there though, as for one point, Caleb Duffy had to hit 4 spikes to get one winner. Superb serving then from Mallow turned the game to 20-13 and they never let Drumshanbo dominate.

A sluggish Drumshanbo led in this game right through as it was still close at 12-10. After that Drumshanbo pulled away.

Such was the talent available initially to Drumshanbo this year, Raymond Gallagher had initially opted for the Senior B squad. Manager Aidan Shannon had persuaded him not too.

With Fergal Guihen, Kian Gibbons and Tomás McManus unavailable, Raymond proved invaluable and hit some of his best shots at the end of this game.

This was a huge win, as Dungarvan were up and coming and won the Cadette B title last year.

Drumshanbo raced 6-3 ahead in this match but the hard hitting Portlaoise side hit four in a row to lead 7-6.

It was still close at 12-10 but Kevin Moran and Gareth Higgins upped their game and worked well together as Moran set up Higgins to deceive the Portlaoise block.

In the end, ever reliable captain, Jack Ozdobinski with a series of aces, opened up a huge gap as he ended the match.

Elphin had just sensationally beaten Mallow in their previous match and as always were superb in defence. They led 7-5 and 9-8, with the sides level five times up to 12.

Drumshanbo pulled away to 17-12 but Elphin fought back to only trail 19-20. 5 serves from Fergal Gilmartin, however opened up the final gap.

Drumshanbo’s handling was much improved in this game with Cian Beirne showing precision control and so Drumshanbo, after an early shock, were back in the semi-final.