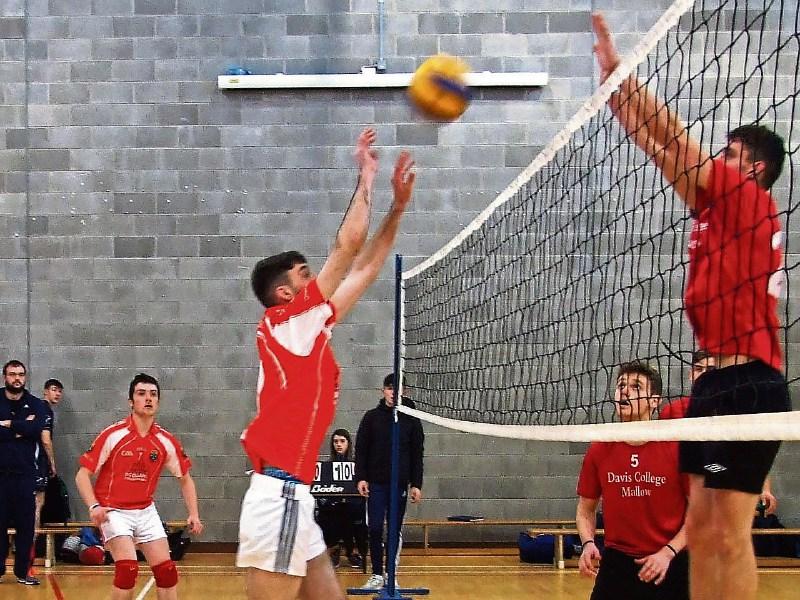 Drumshanbo's Gareth Higgins tries to get the ball above a Mallow block in the Senior A League.

After last years unbeaten run to All Ireland victory there was a lot to live up to for the brand new Drumshanbo cadette squad and they will be satisfied with their first outings.

Despite the score line, this was a very good Elphin side. They constantly broke the Drumshanbo serve but missed their own!

Star Drumshanbo player was Aidan McCormack in the opening set whose ace brought them level at 2-0 and popped up everywhere as Drumshanbo took a decisive lead at 15-9.

The second set was very exciting. Emmett Moran gave Drumshanbo a 2-0 lead. Elphin raced 6-3 ahead. Scores were level six times between 7 and 13. Colin Moran served eight and Barry McWeeney showed lightening reactions, to push Drumshanbo from 12-13 behind to 20-13 in front.

Elphin roared back to 20 all. Then, with the introduction of Cathal McGourty, Drumshanbo pushed on to victory.

Drumshanbo led 3-0 but, after levelling at 5, Brigid’s showed why they were favourites as they raced ahead.

However, even in this set, Diarmuid McKiernan caused huge upset with his defensive skills, saving the ball from the floor and Gareth Gilmartin, as he did in most set ends all day, hit lethal serves at the end of the set to lift Drumshanbo’s score from 15 to 19.

The second set was the highlight of the day. A very steady Chris Boyle served Drumshanbo from 1-3 to 4-3. With a high standard of setting, Peter Winters, with no service misses all day, helped give Drumshanbo to an 11-6 lead.

Tired after their fifth consecutive set, Drumshanbo let Brigid’s ahead 0-10. Fergal Moran, who starred in the first set of the day with great serving, came on again and with spikes and good receiving made Brigid’s fight very hard for their final points.