Searching for the milliseconds that add up to elite breakthrough 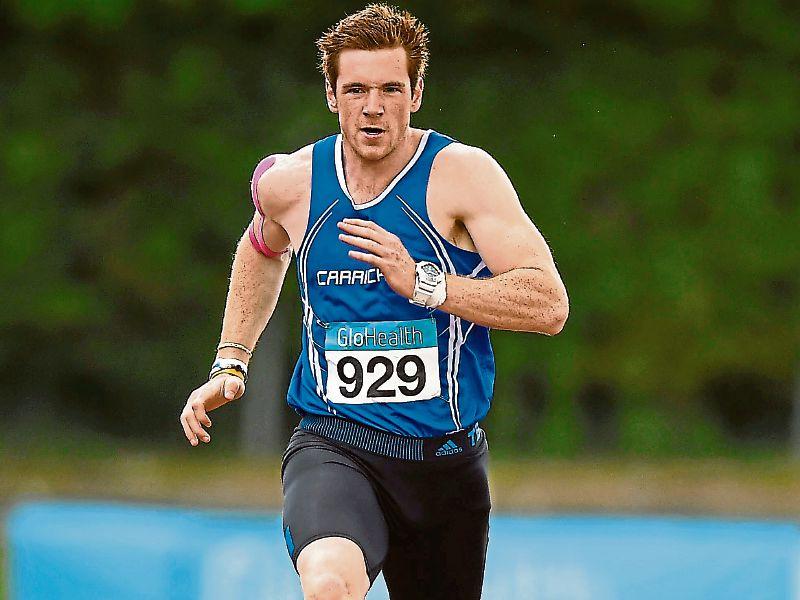 A joint winner of the Senior Sport Star Award at this year’s Leitrim Sport Star Awards, Eanna debuted at the European Senior Athletics Championships in Amsterdam last July as a member of the Irish 4 x 100m after winning the National Senior 200m crown in dominating fashion.

But like most ambitious sports people, Eanna sees his setbacks as much as his successes - “A great year, winning the National title and being at the European Championships but looking back, it could have been better, it could have been a really good year only that I came up just so short and ran out of time to get that qualifying standard for the European Seniors.

Missing out on individual qualifying may, however, be the very thing that heralds a major breakthrough in 2017 - “Looking back , I can see that I am at that level now and if I do the right things this year and prepare for the season ahead, I won’t have to worry about injuries and setbacks and push on and not have to worry about getting injured after races .”

Incredibly, the Mohill man spent most of the year battling a persistent hamstring problem that threatened his entire season as the Carrick-on-Shannon AC sprinter was almost operating off one leg for the outdoor campaign.

And Eanna admits the battle took a toll - “Trying to come back, the physiological aspect of getting injured after a race, having to come back and wondering will it push you back and fearing that you are going to get injured in the next race.

“So if I can get all of that out of my head for this year and just to have that confidence, God knows what could happen. I took off nearly half a second this year and if I can take off half a second next year, you are looking at World Championships and medals at World Student Games and looking at bigger, bigger things, maybe going to that professional side of the sport.”

Eanna has already taken major steps to rectify his injury problems with an extensive prehab programme before the training season even began and he is definitely using his injuries as a motivation for 2017.

“When I sat down with my coaches in Limerick and we saw that ok, I could have gone a lot faster and this is what I need to do to prevent that. It is motivating at the same time that I was in this sort of shape out at warm-weather training camp earlier on in the season and had you been fully fit, you could have achieved this or that or be higher up or got into the right races.

“You wouldn’t have to be missing weeks of training, which accumulated at the end of the year, and missing valuable races which were good races that could have got you good times in. The fact that I was always chasing qualifying times and running out of time, it affected the whole cycle.

“This year, I want to get everything right and I’m doing the rehab early, fixing a lot of technical issues and postural issues which have led to a lot of injuries, which is very time consuming and very tasking. It will be very hard to change my old ways after running like that for four years now. It will be a big task but if I can focus on that, that will be the make or break for the season.

“I know I had a good season indoors and if I brought that to the outdoors, I could have progressed even more in 2016. So the idea is to have a good indoors and progress to the outdoors the same way I did last year but without any injuries, it could be a great season ahead.”

But even allowing for his troubles, 2016 was a big step in the right direction for Eanna and he was delighted to be honoured at the Leitrim Sport Star Awards - “Delighted to get another year and another award, just add to the collection now at this stage , I want to keep building them up and it adds to the motivation now for the year ahead.

The next step is something that obviously stirs Eanna as the words flow like a torrent as he discusses his aims for the coming season - “Looking at my immediate goal is the indoors, we don’t take them that seriously but it would be nice to qualify for the European Indoors in the 400m.

“I’m training for 400ms, I’ll see where I am but I am not going to specifically focus my whole season on that but I will aim to be running fast over 400m and bring that fitness and that stamina over 400m into my outdoor season and get the standard for the World Student Games early because it is an early deadline and you need to be running fast really early.

“If I can do that and get that out of the way and then just focus on trying to run faster and faster over the Summer, anything is possible. If you take half a second last year and another half a second next year, you’re getting close on World times.

“You’d be on the main stage with the big guns then and that is when you have to step up to the mark. Other Irish sprinters have done, the likes of Paul Hession, he is no different to anyone else and he did it so why can’t someone else do it. I’m ranked second in Ireland now over 200m and third in the 100m and I wasn’t even running 100s last year.

“The aim is to be number one and be up there with my main competitor Marcus Lawler because last year, I would have felt that I would have been up there and I would have had the fitness and the speed but I didn’t have the confidence coming into races after being injured.”