Gold for Carrie, silver for Wiktoria in Connacht Schools Finals 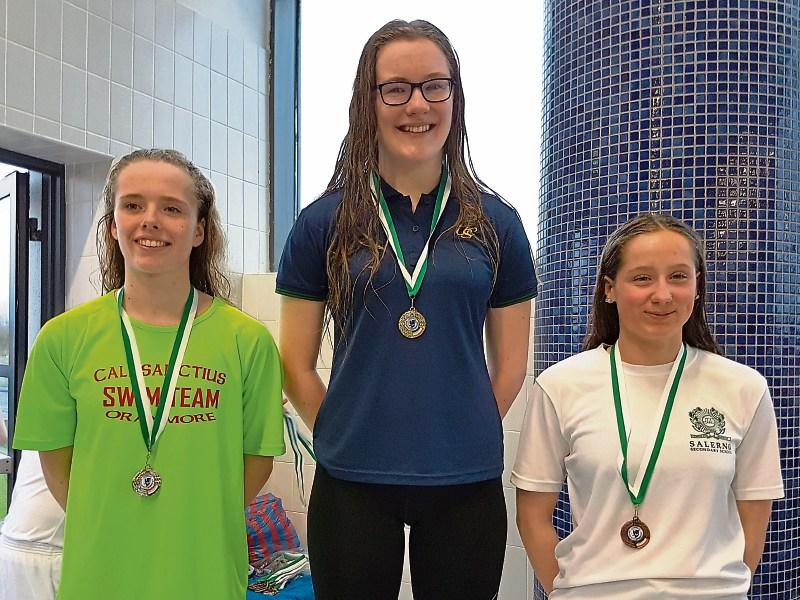 Carrie McDaid on top of the podium with her gold medal for winning the 100m freestyle.

Competing in the 15-16 year age group Carrie McDaid from Dromahair was representing the Ursuline College, Sligo. Carrie had a great day, winning the Gold medal in the 100m Freestyle as well as Silver in the 200m Individual Medley.

Carrie was also part of the Ursuline College's Intermediate team which scooped Gold in the 4X50m medley relay, beating off stiff competition from seven other schools from around Connacht.

Not content with just the Gold, the Ursuline girls (comprising Carrie McDaid, Tara Walsh, Maria Lyons and Danielle Farrell) went on to win Silver in the 4x50 freestyle relay.

The other Leitrim winner in Athlone was Wiktoria Weinert, representing her school Carrick on Shannon Community School. Wiktoria was swimming in the 14 & under age group and won Silver in the 100m Breaststroke along with Bronze in the 200m Individual Medley.

Carrie, Wiktoria and Diarmuid all automatically qualify for selection for Connacht in the Interprovincial Schools Championships at the NAC in Dublin in April.