SO CLOSE YET SO FAR 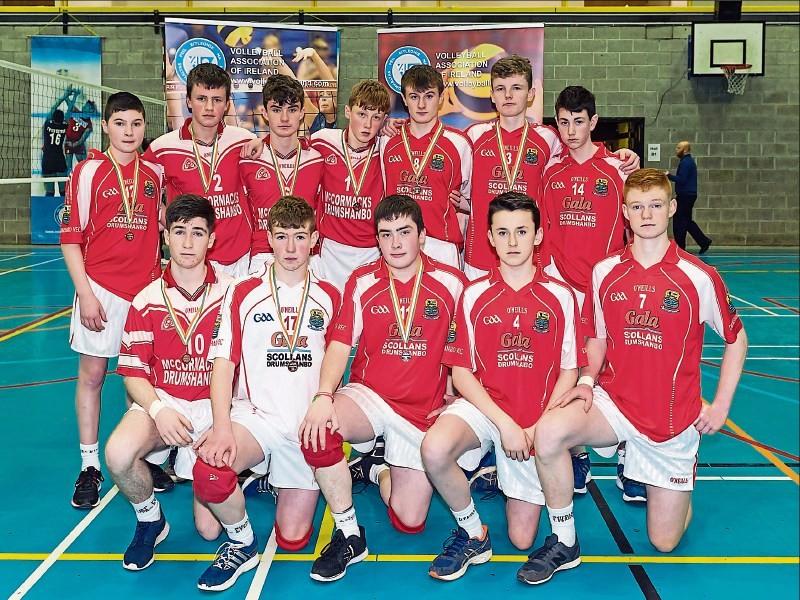 The Drumshanbo Vocational School team who were defeated by St. Brigid's in last Thursday's All-Ireland Cadette A Volleyball Final in UCD. (Back, from left) Peter Winters, Sean McNabola, Barry McWeeney

Drumshanbo VS relinquished their hold on the All-Ireland Cadette A title last Thursday but not without a ferocious battle in a titanic clash with St. Brigid’s Loughrea.

The Galway and Leitrim schools have a long and fierce rivalry with the Drumshanbo lads getting the better of Loughrea in last year’s final, a dominant and devastating two set victory that underlined the class of the Drumshanbo men.

This year's scoreline, while also a 2-0 win for St. Brigid’s, doesn’t reflect just how titanic a struggle this game was as Drumshanbo traded point for point with a well drilled St. Brigid’s side who featured the talents of the outstanding Damien McGlynn, the Loughrea captain ultimately the difference between two evenly matched teams.

You got the sense that it wouldn’t have taken much for St. Brigid’s to crack but credit to the Galway school, every time Drumshanbo looked as if they would take control, they hit back to break the Leitrim’s school’s momentum.

It really was that close, particularly in an epic second set that went right down to the wire as Drumshanbo showed incredible spirit to recover from a seemingly impossible position to tie the game at 24-24 apiece before Brigid’s finished off the game.

St. Brigid’s had a three point lead and match point at 24-21 but a vital time-out from coach Aidan Shannon broke the Galway school’s momentum, made them think about the enormity of the next point and Drumshanbo took advantage with three points off St. Brigid’s mistakes.

Unfortunately, St. Brigid’s returned the favour, calling a timeout with the scores tied it was Drumshanbo who unfortunately blinked first, two mistakes allowing the Galway school to claim the title.

Drumshanbo opened up an early 2-0 lead off St. Brigid’s returning long but a brilliant dink over the cover by captain David Gallagher gave them a 3-2 lead. A great block from Fergal Moran and Adam McCormack prevented a certain score but Drumshanbo seemed to be finding their form as Fergal Moran hit three aces to put his team 7-5 ahead.

The tit for tat nature of the game saw St. Brigid’s return to go 9-10 ahead with Moran unlucky with one return, the Galway team led 14-17. A lovely touch from McCormack cut the gap to two but unfortunately, a few errors crept into Drumshanbo’s play.

The lead crept to six points with some great play from Diarmuid McKiernan saving a certain score but with a controversial foot-fault called against Drumshanbo, St. Brigid’s claimed the first set 25-17.

Drumshanbo again opened with a 2-0 advantage in the second set as St. Brigid’s tall Brian Treacy started to make errors that were gleefully capitalised upon by the Leitrim lads. However, Treacy was also capable of some big smashes and two scores led to a 2-3 lead for the Galway lads.

David Gallagher pulled off another brilliant feint, a delicate touch over two jumping defenders catching out St. Brigid’s as he found open court off to their left. Treacy managed to rescue what looked like a certain Drumshanbo score but a great Fergal Moran serve saw Drumshanbo lead 5-4.

But this match was always going to be a game of inches as Conor McGrath’s powerful return smashed into two jumping Drumshanbo defenders and rebounded into the net for a Brigid’s score.

The tension started to get to both teams with serves from either end going straight into the net before Fergal Moran, whose smashes were a feature of this contest, drove a piledriver so fiercely into the floor that it rebounded up into the adjoining gym in UCD.

Brigid’s were managing to halt Drumshanbo’s gallop any time they threatened to move up a gear after McCormack’s serve caught a Brigid’s player on it’s way out with Damien McGlynn again forcing his team back into the game.

A great save from Fergal Moran prevented a certain St. Brigid’s score with a long rally ending with Brigid’s hitting long to tie the scores at 10-10.

Gareth Gilmartin made a great save to get a point off a defender while his serve was hit out as Drumshanbo opened a two point lead and the Leitrim lads were maintaining that lead all the way up to 19-17 with Gilmartin & McCormack scoring off a great, Gallagher hitting an ace before Colin Moran scored a huge point.

Unfortunately, St. Brigid's capitalised a long serve and a mistake on a Brigid’s serve as Drumshanbo players left it to each other. McGlynn put a serve into the net but made amends with a huge point after McKiernan made a big return.

That put St. Brigid’s 21-20 up and when a Brigid’s serve skimmed the net, going over two set defenders and dropping it, it set up match point as everything seemed to be going the way of the Galway school.

Coach Aidan Shannon called a timeout and it did the trick as Drumshanbo threw caution to the wind and St. Brigid’s started to over-think their winning position, serving long and twice sending returns straight out of play, tying the scores at 24-24.

That tied up the scores but St. Brigid’s coach Mary Barrett called a timeout and that did the trick as Drumshanbo’s serve went long before a dink from Dylan Shaughnessy saw several Drumshanbo players leave the ball for each other, the ball landing on the ground to end the hopes of two-in-a-row for Drumshanbo.