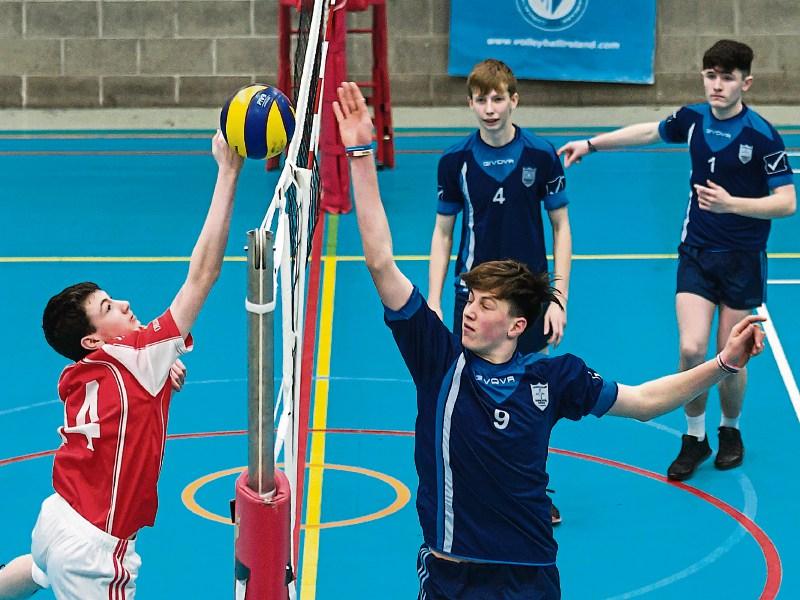 Aidan McCormack gets his hand to a ball from St. Brigid's Brian Treacy last Thursday in UCD. Photo by Paddy Barrett

The immediate aftermath of a loss is oftentimes not the easiest place for reflection but Drumshanbo VS coach Aidan Shannon was able to sum up what was an incredibly disappointing defeat.

Drumshanbo put their Cadette A title on the line against the team they had defeated in last year’s Final but the two set to nil scoreline does little or no justice to the battling effort put in by the Leitrim school.

Indeed, Aidan felt that the Drumshanbo school should have had the MVP award as he praised their battling qualities - “We did battle. To lose the first set 25-17 and then to even up the scores at 24-all, I thought we were in a good chance, the lads really dug deep.

“They really fought for it, Diarmuid McKiernan was a great libero, I'm very disappointed he didn’t get MVP. Defeat is hard to take, it will probably hit me later.”

Tactics played their part in a fascinating contest and Aidan admitted the timing of timeouts proved crucial in the game - “It works on both sides, you can break the momentum fairly quickly. A player serving and he goes back to the line again and he has lost his whole positioning from earlier so it works.

The Drumshanbo coach agreed that St. Brigid’s excelled in finding gaps in Leitrim’s cover and that proved to be the difference - “You put up your hands, you are on your own, you can’t do anything about behind you. You have to look for the players behind you and sometimes, if they are caught ball watching, that’s it.”

Nevertheless, Aidan sees a bright future for Drumshanbo, both at Senior and Cadette, in the years ahead - “Next year, some of those lads are eligible for the game next year and we will be back.

“Some of those lads have a winners medal and a runners-up medal and it is super, nobody can take anything away from them. We should be a force at Senior but these two teams are role models for the players coming up behind them.

“We have started first years recently and there is some great talent appearing there and they look up to these players like they are bigger brothers and that is the case in some case but there are great things to look forward to.”