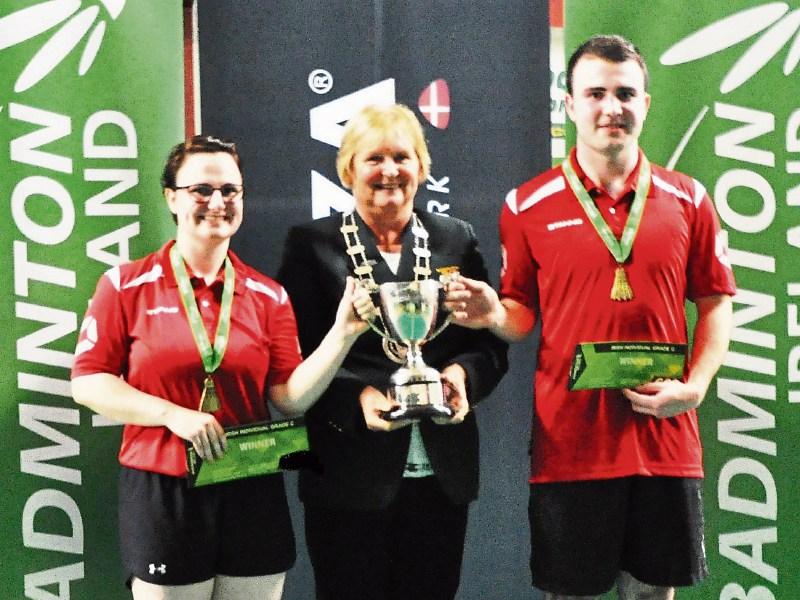 Clare and John Finnegan are presented with their All-Ireland trophies.

Leitrim’s Clare and John Finnegan won a second All Ireland Badminton title at the All-Ireland Grade B in Lisburn.

Clare and John Finnegan have continued their winning form this season at the Grade B All-Ireland Badminton Championships held in Lisburn recently.

The Lisburn Rackets Club is the home of Ulster badminton and is a very difficult venue for travelling players to come away from with a title. However, the Leitrim pair fought their way to the final with a number of three set matches.

In the final they lost the first set badly 13-21, before fighting back to take the second 21-18. The final set was the closest of all with both pairs having opportunities to serve for the title after they tied at 20-20, however, Clare and John managed to make their own little bit of history by winning the tie break 24-22.

Irish badminton is divided into nine different grades. Currently Clare and John are graded C. At the beginning of the season they won the Grade C All-Ireland mixed and followed that up by winning the Leinster Grade A Open.

As a result Clare and John were given a debut in the Irish Premier League for the Ailesbury Falcons, although they lost to the European U17 singles champion and his partner, the match went to a tie break fifth set.

After their win in Lisburn Clare and John now hold both the Grade C and Grade B All-Ireland mixed titles in the same season.