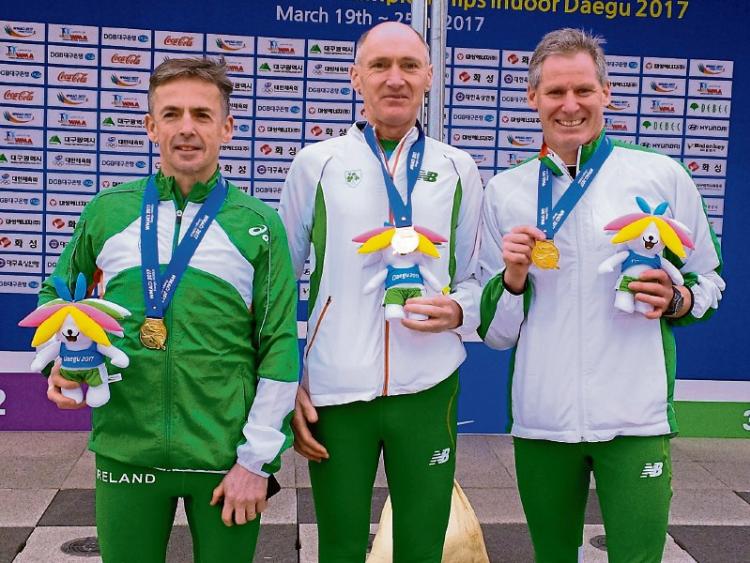 Ballinaglera’s Michael Cornyn made a long journey to South Korea very worthwhile when he won a World Championship gold medal as part of the Irish cross-country team.

Daegu in South Korea is hosting the World Masters Indoors Championships but as part of the programme, the cross-country championships were also held in the Asian city and it proved a very successful trip for the Irish Men’s Over 55 team.

From early on in the race, it was evident that the team contest was between the Irish and Italian team with the top two Italians forcing the pace ahead of Tom and Pat. With O’Grady struggling from a hamstring injury, the battle for gold would come down to each team’s third place runner.

But with Michael, who now competes in the colours of Dunboyne AC in Meath, running strongly just behind Tom & Pat, Ireland were well in control with the third Italian runner almost a half a lap behind entering the final 2k.

Ireland looked set for an easy win but South Korea started to threaten with two runners just ahead of Michael and there was a danger they might spring a surprise but with 200m to the finish, Michael sprinted past one of the South Koreans to ensure the gold medal for Ireland.

After a very successful series of heats which saw another event added to cater for the numbers taking the Leitrim Sports Partnership event produced some excellent competition in Ballinamore.

Scoil Mhuire from Carrick-on-Shannon won the Third & Fourth Class categories ahead of Four Masters in Kinlough and Scoil Clann Naofa Ballinamore but the Kinlough school prevailed in the 5th & 6th Class Girls event, scoring a clear win over Gaelscoil Liatroma.

However, Gaelscoil Liatroma did take home both boys titles, winning the 3rd & 4th class boys events by 12 points and the 5th & 6th Class boys by just eight points, both times from Four Masters and Scoil Mhuire.

The winning teams will go on to represent Leitrim in the All Ireland Finals in Athlone today (Wednesday March 22).

The overall results were as follows: