Good results for Drumshanbo VS 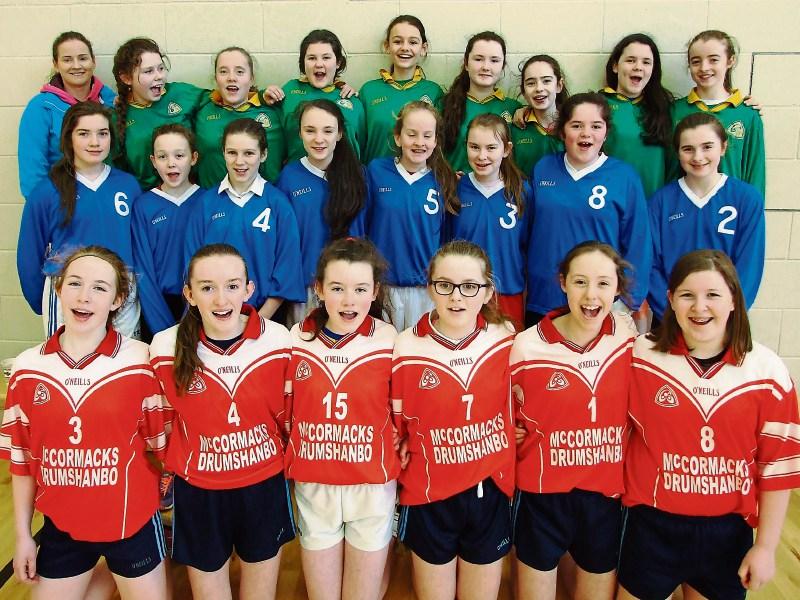 There was more action and success for all Vocational Drumshanbo Junior teams.

Pride of place must go to the Junior B girls. Finishing last in the previous seedings day, they turned their season around by beating St. Louis Kiltimagh B & C teams to become the first of the Juniors to qualify for the third round. Laura Whitney, Aoife Guckian and Amy O’Donnell were the stars.

The Junior A Boys also took a giant step to the third round by having one of their biggest ever wins over Elphin A. Sean Meehan, Evan Foley & Brendan Gunning made strong claims as when they were removed in the second set at 24-8 Elphin got the next four points!

Like the girls, the Junior had an unsuccessful seedings day out. But they got their season back on track when they reversed the seeding result against Elphin B. They stole into an early lead and led by 19-10 at one stage thanks to half the team missing no serve.

Elphin had a great comeback but Drumshanbo held out raising their hopes of a last six place.

Finally came the Junior A girls. Like the Bs, they had no wins in seedings and qualified for A on set difference. Their day began with a comprehensive defeat to Roscommon Community College A.

Elphin A cruised past Kiltimagh A and shocked Roscommon to go top. So Drumshanbo faced Kiltimagh A, still looking for a first win. It proved very exciting as Drumshanbo took their first set of the day, helped by great Saoirse Rowan defence.

However Kiltimagh rebounded in a tight second set and it looked like Drumshanbo's woes were continuing. But suddenly it all changed. Drumshanbo took the lead. Edel O’Donnell was to start on what was a run of 20 serves in a row and Drumshanbo celebrated their first victory. Roscommon duly beat Kiltimagh and grabbed one of the qualifying places so Drumshanbo had to face top of the table Elphin.

What a finish to the day! In the first set the lead yo-yo'd all the way to 18. Elphin sneaked ahead but, on Abigail Collins serve, Drumshanbo fought back to 24-24 helped by a great winning volley from Caitlyn Dolan. Elphin won the set by the tightest of margins.

Drumshanbo were not finished. Their standard of play rose and rose, throwing great passes together and they led all the way in the second set despite a very good comeback from Elphin when down 18-23.

Buoyed by their set win, Drumshanbo, with Amy Coulter, Lucia Ingles Cerrillo and Emma Benson coming back on, stormed ahead in the final set to give Elphin their first defeat of the season.

Heartbreak followed when they found they had failed to qualify on set difference but they are sure to be heard of again.

Just a day after their comeback deeds in the Juniors Drumshanbo stormed to the final of the first year girls blitz on Strokestown.

As they entered the final, Drumshanbo A were the only unbeaten team in a blitz that contained four teams from both Strokestown & Mercy Roscommon, one Roscommon Community College team and three Drumshanbo teams.

In the group matches Drumshanbo beat Strokestown C, an impressive Mercy A team and Drumshanbo B (who almost shocked them!) and finally top of the table Strokestown A (who led them 12-5 at one stage).

In the semi-final Drumshanbo faced Strokestown B. There were signs of tiredness there as, having led 24-17 they just squeezed a victory 28-27.

However, in the final, they started very bright against Strokestown A, leading early on 15-9. But for Drumshanbo stars, Niamh McDonagh and Roslyn Kane, this was their ninth match in two days.

Although the blitz games were only 10 minutes, as Strokestown played very well with consistent serving, they wore Drumshanbo down and took the final 27-23.