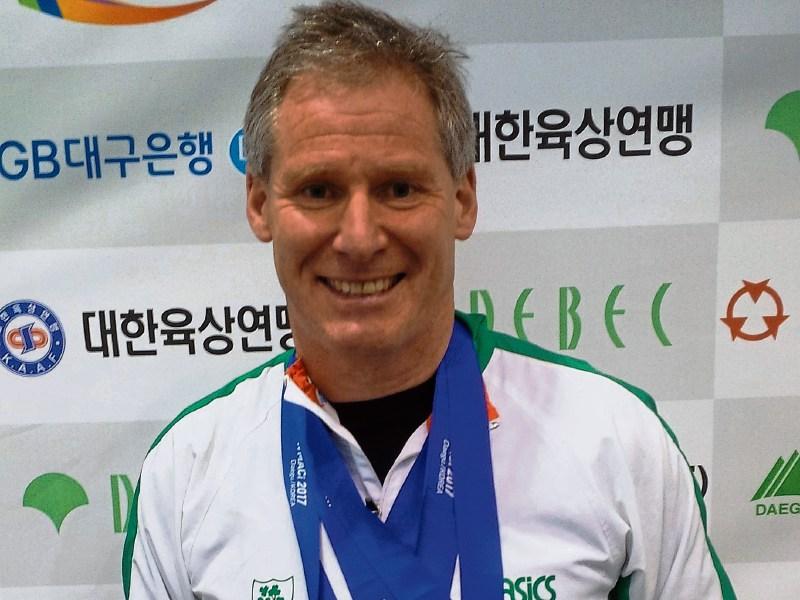 Ballinaglera native Michael Cornyn made it a complete set at the World Masters Championships in Daegu South Korea when he added silver and bronze medals to the gold cross-country medal won last week.

The Dunboyne AC runner claimed a gold with the Irish team in the M55 Cross-country and followed up with silver in the 4 x 200m relay and bronze in the M45 Half-Marathon - and all in the space of six days.

Speaking to the Observer, Michael remembered his running roots in Ballinaglera as he reflected on his success in Daegu - “This has been an amazing week for me here so proud to represent Ballinaglera & my native Leitrim out here.

“The strength I build as a young lad over the roads around Ballinaglera told many years later. The memories of running bare footed all alone on the top of Slieve an Iarainn mountain with nothing in sight but the Heather & the Curlew came back to me in the half marathon.

“What an honour for me to wear the Ireland vest and to anchor an Irish team to World silver. Wonderful feeling to cross that finish line in the silver medal position with the great USA behind us in third.

“I want to thank all the people from around Leitrim and former club mates from North Leitrim AC who sent me messages of support this week, especially PJ Leddy, thank you all so much. This is so important when you 6,000 miles away from home.”

Michael thanked his coach Robert Denmead before thanking his family for all their support - “Thanks also to my wife and family for their sacrifice for me to train and their unwavering support. I look forward to bringing these world medals to Ballinaglera & Leitrim in the near future.”

Michael’s silver medal came in the 4 x 200m where he ran the final leg as Ireland finished second behind a strong British team in a time of 1.58 as they were chased home by the USA in a tight race.

His bronze medal came with a sacrifice as it meant Michael had to withdraw from the 400m final as he committed to help the Irish O45 team in the half-marathon. It all paid off as Michael finished 16th overall in a field of 142 runners.

Lough Key Parkrun 45 last Saturday saw 163 people run, jog and walk the course, of whom 15 were first timers and 57 recorded new personal bests. Representatives of six different clubs took part as the event was made possible by 20 volunteers.

In the Ladies race, Suzanne Keenehan was first across the line again in a time of 22.57 with Carmel Fallon second in 23.28 and Helen McHenry third in 23.32. Full results can be found on the Lough Key parkrun Results Page.