Drumshanbo cruise by Glenstal Abbey but Mallow too good 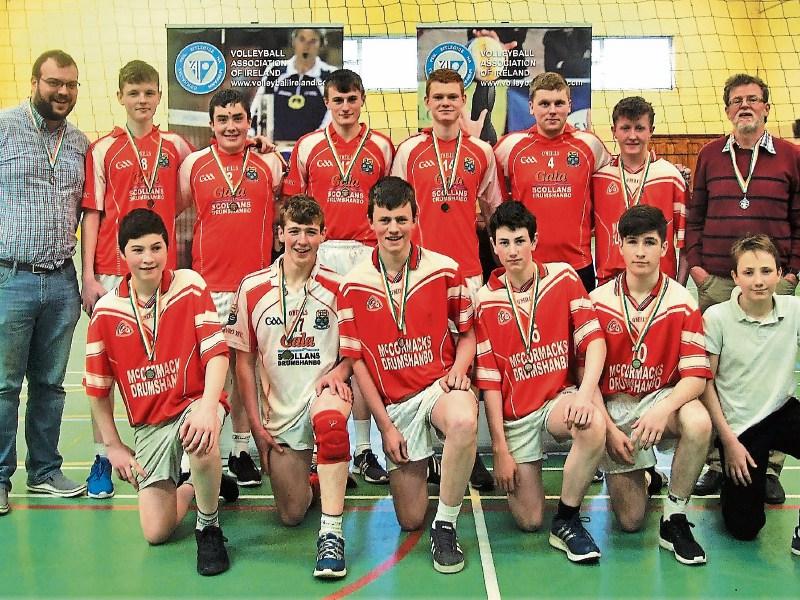 The cup is like the Cup in soccer, a second bite of the cherry and at one stage Drumshanbo looked like they would win the trophy on their maiden trip but age won out in the end as many of the Mallow squad were three years older than their Drumshanbo counterparts.

That could also be true of Glenstal but here Drumshanbo showed their experience.

It was the first meeting of Drumshanbo against a Limerick school since 1995 but despite Glenstal’s athletic ability and height, the result was seldom in doubt.

Aidan McCormack dictated the opening phase with his serve and aced Drumshanbo to 4-0. Gavin Gilmartin followed suit to leave it 10-1. Only one Drumshanbo player missed a serve in the opening set.

Glenstal had a great start to the second set holding up in the rallies and helped by Drumshanbo missed serves, Glenstal led 7-3 and 9-6. It was still close at 16-15. But Fergal Moran spiked well and served 5. Sean McNabola aced and David Gallagher hit a great winner at 20.

Despite five aces from Gilmartin the third set was still close at 7-5. Then Drumshanbo raced ahead 19-10. Enda Keegan received and volleyed like a veteran and, with McCormack showing variety in setting, it allowed Chris Boyle to volley a well-placed winner as Drumshanbo qualified with ease.

In this match the situation was reversed. This Mallow team won the Junior All Ireland when half the Drumshanbo panel were still in primary school. Drumshanbo, due to work and leaving cert commitments were missing all but one of their senior championship semi-final team.

So Drumshanbo gave a great performance against an outrageously hard hitting opposition. Mallow duly led 7-3. But, on Peter Winters serves, they were level at 13-13. Winters had great touches in the set, saving at the back and setting at the front.

The game yo-yoed after that, with Drumshanbo two ahead 17-15, and two behind at 18-20. Colm Moran was prominent throughout, winning at the net and acing at 21-20. Diarmuid McKiernan, the libero, used his defensive skills to stop powerful Mallow hits, particularly at 24-21.

Finally Gilmartin blocked and dumped winners to win a historic set-the first set won in a senior final since 2006!

The early second set was just as close with the same players playing well and when Gilmartin served from 9-13 to 13-13, Mallow called a timeout. The Cork school were obviously told to calm down as they proceeded to rally more before hitting big and, only as the gap widened, did they switch back to full power.

Mallow took an early lead, 12-6, in the third set, but still Drumshanbo fought hard, with the Morans, Colin and Fergal causing problems throughout and Kevin tipping a great winner at 10-16 just like in the first set. Drumshanbo rallied very well at the end of the set on a Winters run of serves.

In the final set Mallow shot ahead 11-5 and 14-6. MVP Fergal Moran, however blocked, spiked and aced winners while ace winners from Kevin and Colm brought the score quite close at 18-22. All in all their performance should inspire them for the future which for many of them will see them cadette for another year.