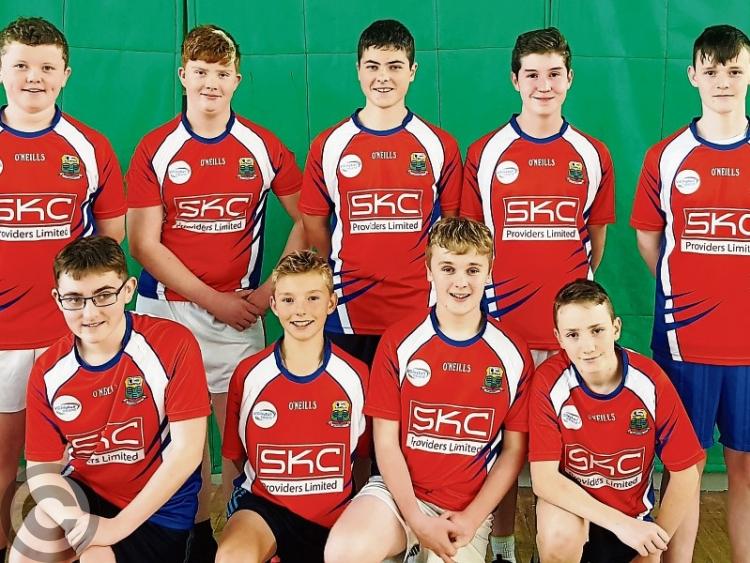 Although the opening set indicates Drumshanbo dominance this was much closer than the scoreline suggests.

At times there were very long rallies. There was great spiking from Elphin. However Drumshanbo’s defence was superb for cadette B standard and time and time again it held out and Drumshanbo took the point.

Elphin led 6-3 at the start but then Arkadiusz Oberwan belied his stature by hitting a great run of powerful serves to leave Drumshanbo 11-6 in front.

Some of the points, however, had extremely long rallies with Elphin's McCawley hitting hard and Drumshanbo’s Ronan Moran showing extraordinary gymnastic tipping at the net.

In the second set, Sean Grier, who had defended superbly in the first set, served 8 in a row to put Drumshanbo 12-2 ahead. Elphin immediately fought back to 9-12 with Kearns hitting well. Their run was finally stopped by a Justin Mulvey volley.

As Elphin reached 13, Conn Malone and Evan Foley combined very well with each hitting a winner, Foley also hitting a superb back court spike at 23-16. Brendan Gunning, who saved certain winners in the first set finished out the second set with a winning spike and an ace.

The final set was a thriller. Level 13 times, with Elphin leading most of the latter half, it took a special fist from Drumshanbo’s Morgan O’Reilly to tie it at 15-15. As Elphin pushed ahead 19-17, it was Daniel Curran’s 3 serves that turned it again to give Drumshanbo the lead at 20-19.

No mention of Drumshanbo Vocational School and volleyball this week would be complete without mention of Brendan Canning who died suddenly recently.

Brendan taught in Drumshanbo 1970-2005. His contributions to the school were far and wide. He arrived the same time as volleyball to the school and was one of the very talented teachers who regularly beat the pupils in the 1970s.

At Easter 1992, out of the blue, Drumshanbo volleyballers qualified to represent Ireland in the European Schools games in France in July. Without being asked, Brendan volunteered to organise fundraising for the players. His organising and management skills were so outstanding that by June the school had more than enough money raised.

It was just one example of what Brendan did many times for the school and for his local community. There was huge sadness among the senior staff and former colleagues and pupils when the news broke on Friday.

Those involved in volleyball want to add their sympathies to all others to his wife Rosie, to Trevor, Andrea, Trína and Andrew, to his grandchildren currently in Drumshanbo school: Daire, member of the senior squad, and Katie and to all who suffer from his loss.

May he rest in peace.