Great "A" week for Drumshanbo VS 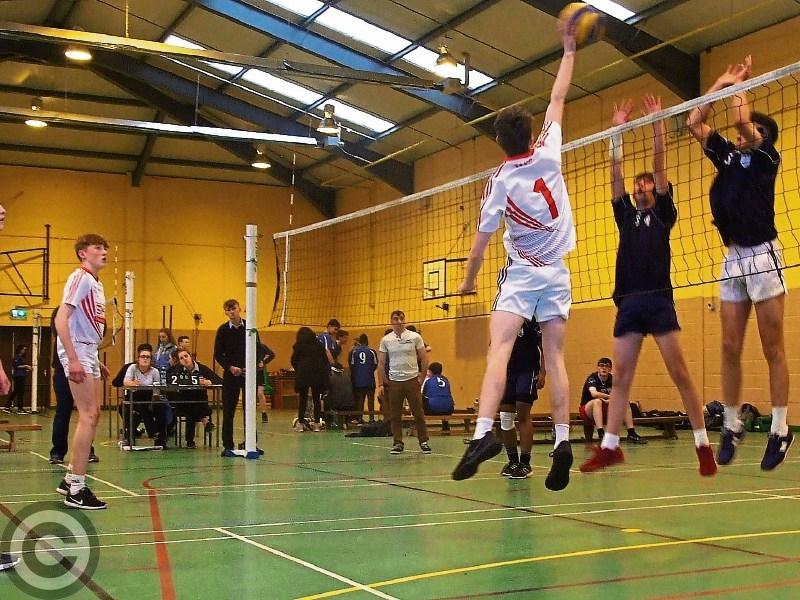 The new season reached its first peak as Drumshanbo Vocational School played top opposition. Both senior and Cadette As had significant wins against up and coming schools.

In particular the Senior As reached their highest peak in 12 years.

Drumshanbo seniors played the other top two in Senior A. They beat unbeaten senior B champions from last year, Athenry, and followed up by beating Loughrea, who laden with players from last years cadette A gold winning team.

Athenry had just sensationally beaten an out-of-form Loughrea and looked very steady in doing so but were overwhelmed by the very experienced Drumshanbo in the first set. All Drumshanbo covered well with the new seniors really starring. David Gallagher opened up the gap, serving from 7-6 to 14-6.

The second set was much closer, level 9 times up to 16-16. Fergal Moran couldn’t miss with spikes at the net. Gareth Gilmartin was equally effective and finished off the set with 4 unstoppable serves. The final set saw promotion for Enda Keegan from cadette B last year. Peter Winters, still a cadette, served from 11-12 to 16-12 and Drumshanbo took control from there.

Brigid's, bruised from the Athenry defeated came out in a seriously aggressive manner shouting across the net in the manner of their Cadette A winning team of last year. This possibly rattled Drumshanbo’s younger players as Loughrea led 11-4 and 15-10 with fabulous serving from Vinny Kenny.

But they did not rattle all. Fergal Gilmartin had his best setting set of the day and Kian Gibbons floored them with seven serves ensuring a very tight finish.

Brigid's raced in good leads in the second set, even leading 17-14. But at 19-19 with Cian Beirne having his best setting game, Drumshanbo pulled into their 1st big lead and tied the game. Brigid's went quiet.

Brigid's again led in the final set until 12-12. Then Tomás McManus rose above all on Fergal Moran’s serve and Drumshanbo raced ahead 19-13. Raymond Gallagher flanked McManus well with his very reliable style of old. Libero Diarmuid McKiernan, alert all day, chased down stray ball on all sides to frustrate Brigid's.

Drumshanbo enter the crucial November stage with a lot learned but know that Brigid’s changed their winning six after the first set and were outstanding in defence.

Drumshanbo’s new cadettes had a huge comeback in their opening game against St. Flannan’s Ennis last week and also a thrilling set against champions Brigid's Loughrea plus a win over local rivals Elphin, to give them a perfect start to their new season.

Missing Aidan McCormack, Drumshanbo had just two of last first six that played in the National final and their inexperience showed when they were very much in disarray in their opening set. Ennis, with a coach that led another Ennis school to the cadette A girls gold last year, looked as good all the reports about them last year. Last year Flannan’s destroyed Drumshanbo’s Junior B team on the way to the final and took a set off the eventual A champions.

In the opening set Ennis’s handling was excellent and Drumshanbo fell 8-20 behind! But then the Drumshanbo veterans took over as Peter Winters’ serve caused havoc and Gareth Gilmartin unleashed huge power at the net.

Debutant Emmett Moran also starred during the come-back, saving winners and serving 4 times successfully after Ennis led 24-20. The finish was hectic with each side sharing set points.

The second set could not match that. Ennis started under siege. Then they hauled back to 8-8 only to be rolled over again as Barry McWeeney served Drumshanbo ahead 16-8. Ennis fought back to 18-21 but Cathal McGourty shut them out with great placement and serves.

This was a strange game. Level 5 times to 6-6, Brigid's raced ahead 13-9 16-12 and even 19-16. Then McWeeney served Drumshanbo ahead 23-20 and Drumshanbo had set point on 3 occasions from 24-22 but close net decisions sealed the exciting finish for Loughrea.

In the second set Drumshanbo fell behind from the start and it looked like the exertion of the Ennis match had worn them out.

After Elphin came back to 6-8 in the first set, Drumshanbo raced ahead 14-8, thanks to a fabulous service run by Dylan Easterbrook. Drumshanbo led 19-9, a lead too much for the Roscommon school. Conor Flood made a very successful debut, setting up his equally young classmate Radaslaw Oberwan, for winners.

Oberwan hit 16 serves without a miss in the match. After a close start in the 2nd set, Drumshanbo raced ahead 22-14 with spikes and aces from Sean Mcnabola, but Elphin had a great finish where they saved four match points before yielding.