Unbeaten Drumshanbo back in Senior Final 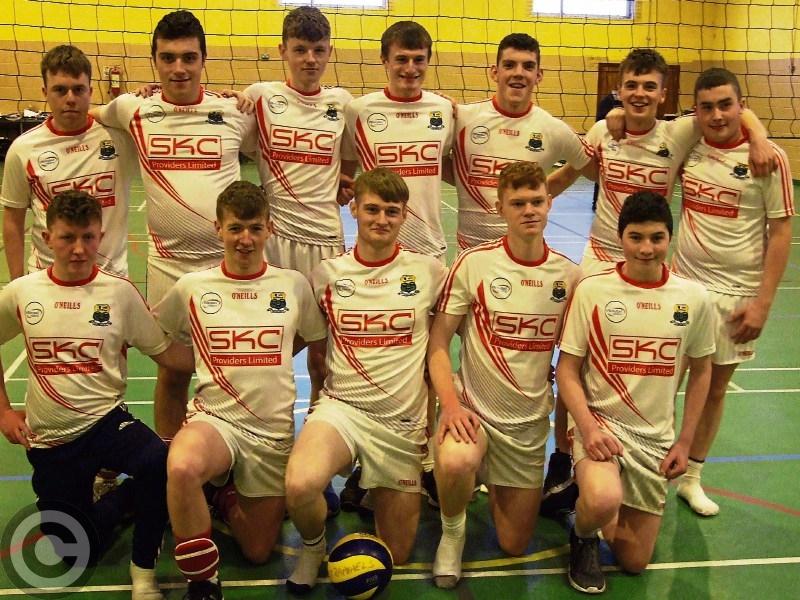 The Drumshanbo VS Senior A team who will contest this year’s All-Ireland Volleyball Final next Wednesday, December 13

For only the third time in the last 12 years Drumshanbo have reached the senior A final. But this time they have reached the final beating all comers, although not without been given a thorough grilling by Athenry in the semi-final in Loughrea.

This was thorough search of where this senior team stood. Athenry had improved enormously in defence this year and thoroughly rattled Drumshanbo.

The only consolation for Drumshanbo was that they ran their bench and in doing so learned a lot about their panel.

Drumshanbo opened strong, leading 3-0 at the start, and, except at 6-6 led the whole way, dominating play. Fergal Moran was possibly the star with lots of winners. Kian Gibbons hit 7 serves, and Fergal Gilmartin set very well.

Drumshanbo changed a third of their first six in the second set. At the same time Athenry came out very aggressive. With Drumshanbo playing steady, Athenry were hitting winners and missing.

Libero Diarmuid McKiernan had a great spell and picked up on a lot of the Athenry attack and this allowed Drumshanbo go 12-6 ahead. Suddenly, Athenry stopped missing. With aces and fine hitting they jumped right back in play to lead 15-14.

Further changes to Drumshanbo in the third finally gave Athenry the break they needed. They continued their aggressive attack quickly wiping errors that left them 0-3 down to lead 4-3. Still everything seemed set up for a 3 set win for Drumshanbo.

A Colin Moran service run put Drumshanbo 8-5 ahead. Cian Beirne had settled in smoothly as a setter and Tomás McManus aced them to 13-9. But then Athenry went on a superb run of aces and winning spikes that floored Drumshanbo for the first time this season.

Aidan Shannon then returned to his starting 6 of the first set. Drumshanbo’s start was electric. Five serves from David Gallagher were each followed by ultra hard spike winners from Garrett Gilmartin and top blocking from Fergal Moran. Drumshanbo led 6-1.

Fergal Gilmartin, who was having a great day as a setter then placed a perfect winner at 7-3. At 11-5, McManus, Drumshanbo’s central defender throughout the match had to go off injured. McManus was a huge loss. His fellow Kilronan man, Ray Gallagher, now had to take over central control.

There followed the longest rally of the match of over 30 touches. McManus likes to finish the rally with a spectacular ball - win or lose, whereas Gallagher wore them down with spike after spike. It looked like Drumshanbo would survive the crisis at 12-6.

And they extended it to 13-6. Athenry still trailed 15-8 before they made their usual counter attack. As the score narrowed to 18-16 and 20-18 Colin Moran came on to steady the ship. Finally at 22-19 it was Kian Gibbon’s serve. Just as he had done right through the match, he had no errors and no mercy. Drumshanbo were back in the final.

In a challenge against home school and final opponents St. Brigid’s, Peter Winters hit 8 serves to turn the first set and Enda Keegan hit his first spike winner and ace at Senior A level!