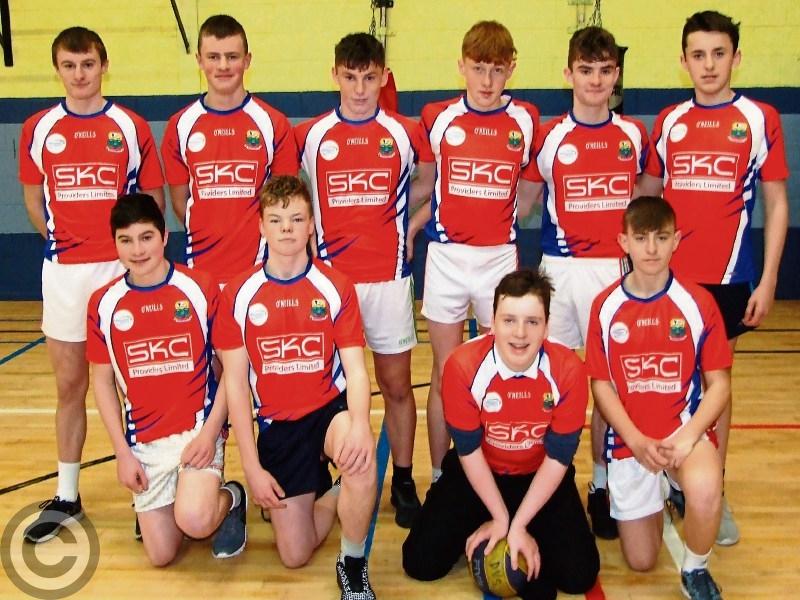 The Drumshanbo VS Cadette A team

It was a thriller. Three ultra-tight sets and, in each set the lead swapped sides several times.

Last year Raphael’s were the one school that thwarted Drumshanbo each time they met: In the marathon Senior A semi-final and the Junior A final, Raphael’s just pipped then so Drumshanbo pipped in reverse.

Drumshanbo did not open well however, with the top players below form. Emmett Moran’s saves were the only reason that they only trailed 11-15. A purple acing patch by Cathal McGourty drew them level at 15. But net errors handed Raphael’s another 18-15 lead.

Finally after five combination attacks from Dylan Easterbrook to Barry McWeeney to win one point, Drumshanbo’s block began to work and forced errors from Raphael's.

Drumshanbo were much better in the second set as Peter Winters fed sets to Garrett Gilmartin who spiked at his best to start them 4-0 ahead. Barry McWeeney lifted them to 8-5 ahead but then Raphael’s upped their game with aces and went ahead 10-9.

However, Garret Gilmartin then asserted himself and Drumshanbo led 19-15. Confusion and overconfidence threw the match back to Loughrea who led 21-20 and 23-21.

But Radick Oberwan then proved why he is a great substitute by downing the ball in the front court and with McWeeney serving and Winters –Gilmartin on song, Drumshanbo raced all the way to game.

The final set also ebbed each way. Drumshanbo led 9-5 and Sean McNabola showed his versatility, moving forward and backwards to rescue balls back into play. Raphael’s led 22-18 and a Conor Flood set in one point plus a spike winner in the next started the Drumshanbo comeback.