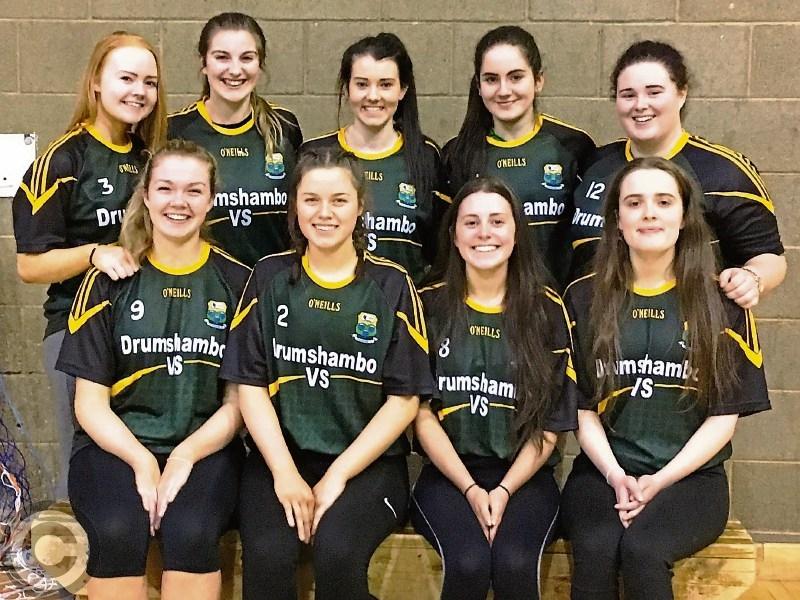 As Drumshanbo Vocational School's Senior A team do their last training for the final, they were nearly joined by their senior girls.

Meanwhile, the Cadette B boys beat Kiltimagh A, Mayo and yet another different school Borrisoleigh A, Tipperary to advance to the national semi-final.

After a terrible start to the day against Dungarvan, Drumshanbo bounced back impressively to beat Sutton Park Dublin.

Then they had to beat unbeaten and very impressive Strokestown to reach, what would have been, the school’s first ever girls senior final.

It was a cracking game, with Drumshanbo fighting all the way, but Strokestown maintained their season’s form and reached their first ever National final.

Áine Flood’s movement was superb throughout. Maria Prior, Aisling Gill, Mairead Flood, and Ciara Reynolds played all matches and finished with their best display of the season.

Drumshanbo Cadette B boys roll on to semi-final

This was the strangest match ever. A superb attacking Kiltimagh came up against an unyielding Drumshanbo and found themselves comfortably beaten!

In the first set Kiltimagh hit winners then hit out even more times as Drumshanbo kept the ball going back and back.

Seán Grier and Shawn Meehan were the stars as Drumshanbo hardly put a foot wrong leading 24-14.

Somehow, in the second set, Kiltimagh steadied, cut out the errors, and, despite Arkadiusz Oberwan best defence, levelled the game.

In the deciding set Mario Baquero Orelana and Conn Malone came on and Drumshanbo raced into an early lead. 5 serves from Arlena and good hits from Ronan Moran put them 12-6 ahead. Drumshanbo’s consistency meant Kiltimagh never got a run and trailed 16-23 at the end.

Drumshanbo B beat St. Joseph’s Borrisoleigh 25-17 20-25 25-19The Tipperary school threw up a totally different scene. They hit no spikes but, it’s as if Drumshanbo were surprised, and for a set and a half did not play well.

Luckily, for the first set, Borrisoleigh were only settling and played poorly as well. But Drumshanbo had Brendan Gunning and he hit runs of serves and they led 20- 12.

In the second set, Borrisoleigh found their tall players could hit down. Manager Sean Scollan called 2 time outs at 14-17 and 16-21.

Then, leading the attack all day, Evan Foley served superbly at the end, as Eoin Smyth discovered his best form.