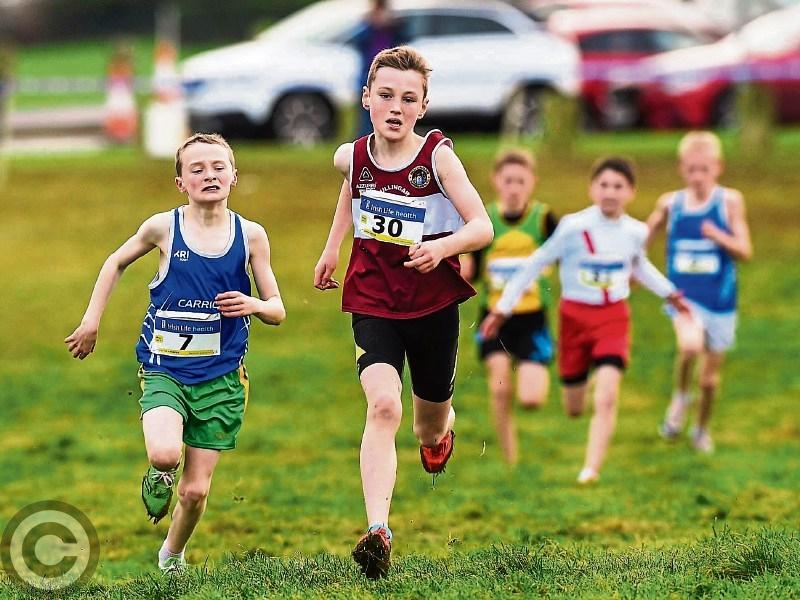 The Kennedy brothers closed a remarkable season with a second placed finish for Patrick and a fifth place for Declan in the U11 Boys race in the grounds of Waterford IT while North Leitrim’s Niamh Carolan returned a second top 30 performance in the space of three weeks.

On a testing, muddy and very hilly course, featuring one climb that was nearly 200m in length, the Kennedy brothers shot into the lead and actually built up a lead of ten metres after the first 300m on the rest of the field.

By the time the first hill, Mullingar Harriers’ Conor Liston had reeled in the Carrick pair and started to build up a lead. Patrick fought back to draw level with the Westmeath runner and the pair were locked in a battle all the way to the line with Liston prevailing after a great contest.

Not too far behind, Declan was caught by two runners and was just edged out for the bronze medal but still picked up one of the top 12 All-Ireland individual medals. Ballinamore AC also had two brothers in action with Mark Ahern finishing 77th in a very competitive race with his younger brother Niall 127th.

North Leitrim AC’s Niamh Carolan was the next highest finisher with a strong 26th in the U15 Girls race. Niamh also started like a rocket and was up in second in the early stages but despite going through a bad patch, she rallied strongly to finish as second Connacht athlete across the line.

Carrick AC’s Lauren Reynolds opted for a slower start and was moving through the field well and was just outside the top 20 starting the final hill when another runner fell in front of her and knocked her to the ground, Lauren doing extremely well to pick herself up and finish 33rd.

Leitrim’s final competitor in action was Brendan Kennedy who finished 118th in the U13 Boys race in his first All-Ireland race.

Road Races over the Festive season

There will be two road races/ fun runs over the Festive season in the Leitrim Area.

On St Stephen’s Day, the Leitrim 5Km Run/Walk in aid of the IHCPT will be held in Leitrim Village at 12 noon with registration opening at 11am. Prizes for first three men and woman, first U16 and 1st local. Spot prizes and refreshments on the day also.

The race begins and registration is at the St Joseph's Hall, beside the church. The course takes runners out towards Ballinawing, turning off towards Sheafield before going around the marker and returning back to the hall. It is a scenic route with no extreme hills to negotiate.

Any athletes looking for a run out over the Christmas season may be heading to Athlone on Saturday, December 30, when AIT hosts the third North West Indoor Games.

The competition will feature a full range of events in all age groups with action getting underway at 10 am on the Saturday morning.

The age groups are U12, U14, U16, U18, Junior, Senior and Masters with athletes allowed to compete in a maximum of three events plus a relay although the U12 and U14 age groups are confined to athletes from Ulster/Athletics NI clubs.

Entry fees are €5 per Juvenile athlete and €5 per event for Seniors and Masters with €20 per relay team.