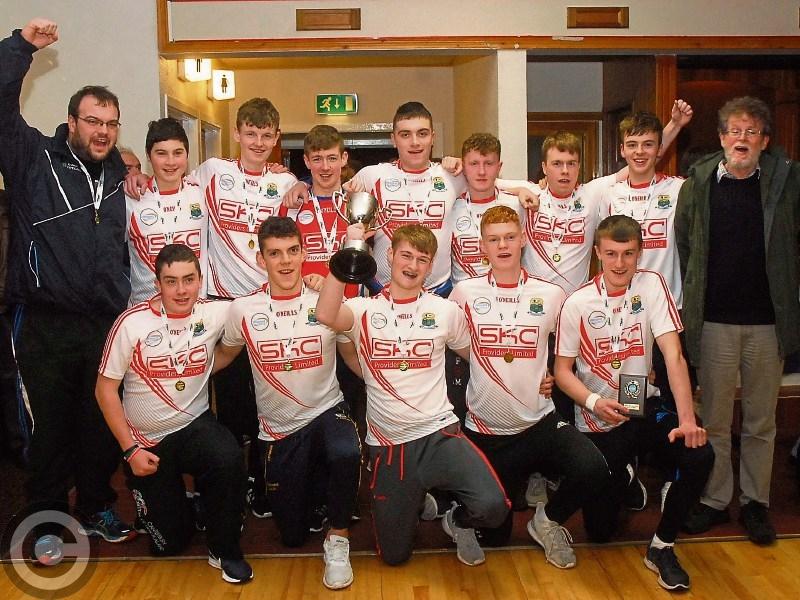 And then, finally, they gave the exhibition. They fired on all 7 cylinders and were in a different class to Loughrea in the final set. It was a gripping match. It took a record 11 players to do so.

The long wait since 2004/5 season was over. And they ended the eight year run from 2010 of Loughrea schools as Senior A champions. Drumshanbo won the Senior A for the fifth time.

The first rally saw Kian Gibbons set up Gareth Gilmartin for an outstanding hit winner and this was to be the signpost to victory. Fergal Moran followed that with a winning block and five serves which, helped by Brigid’s errors, gave Drumshanbo an 8-3 lead. But, suddenly those Brigid’s errors stopped and Brigids led 13-11. Then, for the first time, Drumshanbo went on the offensive.

We wondered what it would be like if Brigid’s cut out errors. In the second set we found out. They played safer. Drumshanbo erred. Drumshanbo were not helped by official decisions either.

The squad has played in front of a lot of national referees in the past few years but never before were they pulled for so many foul touches. Perhaps it is extra strict at the senior A final.

Drumshanbo got two line calls against them that all agree Loughrea hit out of bounds. McManus & libero Diarmuid McKiernan scrambled everywhere to keep the ball in play but Brigids led 20-9.

Colin Moran came on and immediately hit a rocket spike and a placed winner. Cian Beirne came on and set a dream ball. Then Raymond Gallagher passed to Beirne who set up Gallagher again for a winner. Brigids finished off with two spike winners but Drumshanbo finished strongly.

Manager Aidan Shannon then made his master call. He plucked Peter Winters off the bench. Still a cadette, Winters had not featured in the serious battles on the way to the final. Although very skilled, he made the panel through very high attendance and would not have expected to replace any of the three older setters.

The third set was the set of the match. Throughout the set Brigid’s hit lots of winners, but now they faced a four pronged Drumshanbo attack. McManus had a purple patch with several winners and with top class saves from McKiernan, Drumshanbo led 9-6. Brigid’s fought back to 11-11.

The set was level 15 times but from 11-11 to 23-23 Brigids led on 16 times to one for Drumshanbo! Brigids would lead and Drumshanbo caught up.

There was a spectacular point for 19-19. McManus dived to send the ball shooting high towards the net. Instead of setting, Colin Moran rose high to meet it and pulverised the unsuspecting Loughrea side.

For 20-21 Ray Gallagher and Colin Moran both spiked hard and then Winters spiked the winner. Gareth Gilmartin finally spiked Drumshanbo into the lead at set points 24-23 and 25-24. Each time Brigid’s spiked to level. But Fergal Gilmartin aced to win the set.

The final set was Drumshanbo at their peak. Fergal Gilmartin defended. Winters set McManus and Gareth Gilmartin for winners. If that wasn’t possible, the ball was placed very deep, putting Loughrea on the back foot. Loughrea were still playing well and levelled at 5-5.

McManus went on a run of serves, acing his first. Now it was the turn of Raymond Gallagher & Colin Moran at the front, who both hit two winners. McKiernan made a fabulous save at 17-10 as Fergal Gilmartin flicked a winner.

Gibbons set perfectly for a Gareth Gilmartin spike winner at 23-16. Raymond Gallagher served two very deep serves, his final one right into the back corner – an ace, and, the long wait was over! Unbelievable!

Gareth Gilmartin was awarded MVP while his cousin Fergal Gilmartin was captain. Their uncle Kevin McPartlan, played a starring role in Drumshanbo’s first three All Ireland wins, two at Senior A from 1992-1994. But now, the next generation has truly arrived.

What might have been; Strokestown PPS demolished Santa Sabena Sutton Dublin in the Girls Senior C final (Well done to them). Drumshanbo girls lost a very tight game to Strokestown in the semi-final.

Had they been on the other side of the draw, Drumshanbo girls might have been in the medals. But let’s not be greedy!