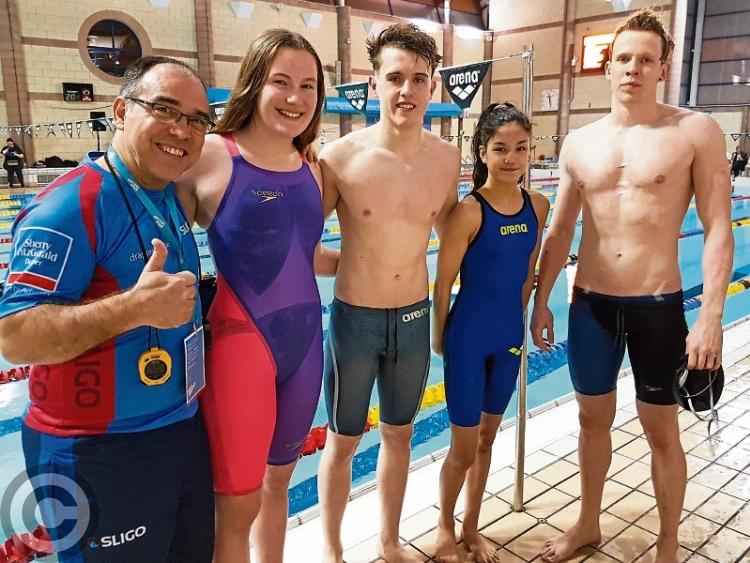 Four Leitrim swimmers competed at the Irish National Short Course Championships 2017 at the Lagan Valley Leisureplex in Lisburn from December 14-17.

The Leitrim swimmers, all members of Sligo Swimming Club, did not disappoint, amassing loads of personal bests (PBs) across the open competition.

Eanna O'Hara from Kinlough was the star performer, claiming a fantastic silver in the 200m Breaststroke, in a time of 2:22.65. Eanna also qualified for two other finals, the 100m and the 50m Breaststroke events, finishing in 6th position in both.

Fifteen year old Carrie McDaid from Dromahair competed in 6 individual events and had a super tournament overall with four new PBs, in the 100m and 200m IM, 50m Breaststroke and 50m Freestyle.

Her highlight was probably the 100m IM where she swam a fast time of 1:09.01. She also competed in the highly competitive 100m Freestyle and 100m Breaststroke.

14 year old Wiktoria Weinert from Carrick-on-Shannon competed in the 50m Breaststroke event and had a fine swim. Wiktoria and Carrie were also both part of the Sligo SC woman's 200m Freestyle Relay team, finishing in 9th place overall.

Eanna and Carrie were both members of the Sligo SC mixed 200m Medley Relay which finished in 7th position and set a new Connacht Senior record for this particular event, in a time of 1:54.35.

Eanna swam the 20m Breaststroke leg in a time of 29.40 and Carrie swam the 50m Fly leg in a very fast time of 29.16, a time which would have given her 4th place in the final of the 50m individual Fly event.

Next up for Leitrim swimmers is the Dave McCullagh International Meet in Bangor in February, the first long course meet of the season.