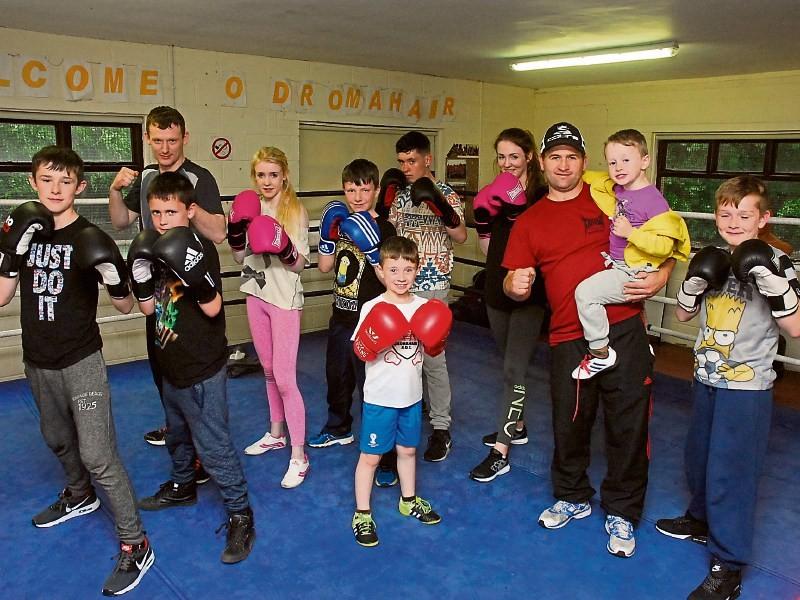 A long running saga that originally saw Dromahair Boxing Club promised the use of the Barracks in the village when the Garda Station closed in 2013 could now see the club forced to move out of the county as their search for a permanent home continues.

The club have been without a home since last July after a part of the roof collapsed on the Pavilion building, adjacent to the pitch in Dromahair, that was used as a temporary base for the club.

Since then the club, which last year catered for 40 members, has endured a nomadic existence travelling considerable distances to avail of training facilities and sparring sessions.

While they have the use of a building in Ballinagar once a week, it is unsuitable for the numbers they wish to cater for. The club have travelled locally to Manorhamilton and Ballymote for sparring but have also been forced to travel much further for training purposes as the club's founder and coach Keelan Finan explained.

“We've been travelling to Tyrone, Longford, Mullingar, Rochfortbridge...everywhere just to get a bit of sparring. We had 40 members last season but that is down to 10 that are dedicated competition boxers.”

The Pavilion is run and operated by DARC (Dromahair Arts & Recreation Centre) and after the roof was repaired it was said the boxing club would be able to continue using the Pavilion facility but would have to take down the ring and other equipment at the end of every session. Those demands, Keelan feels, are unrealistic as he stated, “That room is for everyone but now used by no one.”

When the decision was taken to close the Garda Station in Dromahair in 2013 it was announced by Minister for State, Brian Hayes that the club would be guaranteed the use of the top part of the building for training purposes when the building was handed over to the local community. A lengthy process followed as local groups came together in an attempt to meet the criteria set out by the OPW in order to take control of the building.

Last March, Peter Kearns, Chairperson of the Dromahair Shared Space Project, expressed his frustration to the Leitrim Observer as he felt the OPW had not been flexible enough when it came to ensuring the Barracks in Dromahair was re-opened. “It appears to be a case of a State apparatus not having the skills to deal with community groups. We built our skills up over four years and had a plan.”

Outlining what the future holds for the club Keelan, who is an elected member of the Connacht Boxing Council, said, “We are looking at getting affiliation in Sligo. We are looking at a place in Sligo to start training in the next few weeks and get affiliation from May.”

The club have received support in their efforts to find a permanent home from Deputy Martin Kenny and now Kevin 'Boxer' Moran, Minister of State for the OPW who has pledged to get in contact with the club regarding the promise made in 2013.
Meanwhile Joe Heneghan, Connacht Council President who was the Ireland team boxing manager at the Rio Olympics, has also written a letter of support.

Despite their difficulties the club will be hosting an inter-county, cross-border tournament in the Blue Devon, this Saturday at 2pm.

Dromahair boxing club was promised a home by the Opw in 2013. It's now 2017 and we are on the street 40 young boxers with no gym. What's to be done about this. Our youth is our future.