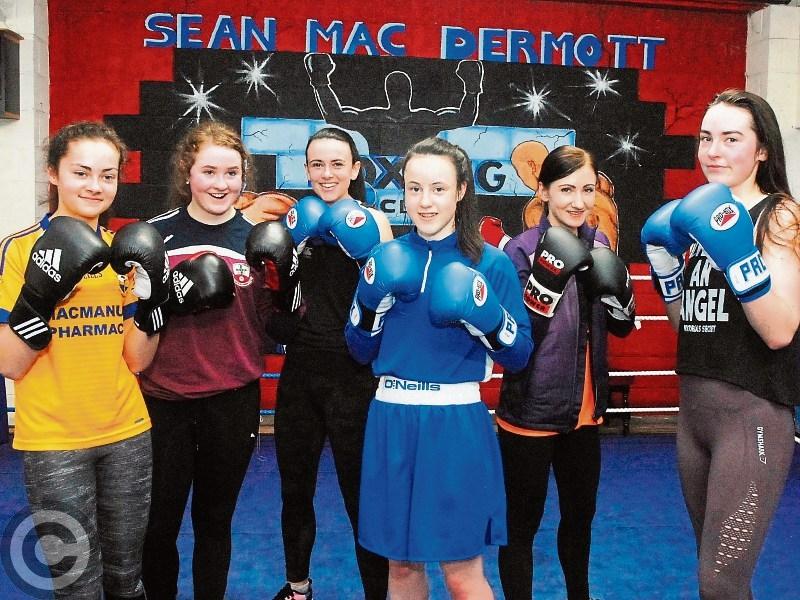 Déarbhla Rooney with some of her Sean McDermott Boxing Club team-mates. Photo by Willie Donnellan

It might be new ground and a first time abroad but Leitrim's newest international sporting star Déarbhla Rooney can’t wait to begin her European adventure when she creates history by fighting in the European Youth Boxing Championships.

The first Leitrim boxer to compete in a European Championships, Déarbhla goes in the flyweight (57kg) category at the Youth Championships that began yesterday in Roesto degli Abruzzi in central Italy.

The Observer visited Sean McDermott Boxing Club in Manorhamilton last week as Déarbhla put the finishing touches to her preparations and there is no doubt that the young Mullies woman is really looking forward to the big occasion - “I can’t wait for it, it is not every day an opportunity like this comes around.”

Under the watchful eyes of coaches James Kelly (Sean McDermott’s last international before Déarbhla) and John Gilligan, Déarbhla was put through her paces as the countdown to the championship entered its final days.

And Déarbhla admitted that she has been delighted with the support she has received from the community in Manorhamilton - “I've had brilliant support and it is really nice to get the support of everyone back home, everyone has been really supportive like the school and the football team as well, they understand that boxing is the priority at the moment.”

A five-time All-Ireland Champion, Déarbhla incredibly has lost just two fights since first lacing up gloves as an 11-year-old - “I won my fifth one this year and I’ve five Connacht titles as well. Girl 2 was my second All-Ireland, I froze up and got nervous and that was the only time. I lost in the Cadet Final two years ago so they were the only two fights I’ve lost in my boxing career.”

Her boxing career started in a very understated manner - “When I was 11, my brother was going in to do a bit of boxing and I thought it would be great for fitness for football so I went in just to do the training but I ended up fighting anyway and I won my first All-Ireland the first year I started boxing. I kept with it then.”

Keeping with it entails quite a lot of challenges from the physical act of training to making weight and even attending training with the Irish squad - “It is a massive challenge keeping the weight down as well, just eating well, eating the right foods, avoiding processed and junk foods.

“I train maybe two days a week here in Sean McDermotts and then at the weekend, from Friday to Sunday, in Edenderry in Offaly at the Irish Boxing High Performance Centre. Bernard Dunne paid a visit, Michael Carruth is one of our coaches, Billy is our head coach, Mike Mongan and Anita, there is a few coaches, they are all top class coaches.

And it is obvious Déarbhla is relishing the opportunity to train in such an environment but admitted that she wouldn’t have achieved what she has without her club coaches - “It is brilliant to get the opportunity and they are all top class coaches. I’ve learned an awful lot from it but I wouldn’t be near as far as I am today without the boxing coaches here, James Kelly, John Gilligan and James McDowell, top class coaches here.”

A talented sportswoman, Déarbhla is equally talented on the Gaelic football field and admits she finds it hard to choose between the two, especially when asked which sport she prefers - “That’s a tough question to answer. Equally.

“They are completely different. On the football field, it is nice to have the team around you but in boxing, I feel that when I put the work in myself, I can feel my own self gaining and when I go into the ring, I know that I’ve done the training and I’ll perform well.

“I played basketball with the school and when I was younger, I did running and I did rugby with my old school. Whatever was going really, I love sport.”

With her parents Padraig and Geraldine travelling over to Italy for the Championships, the young fighter can’t wait to get going - “It is big alright but the less people know about it, the less nervous I am. Both my parents are going out so there will be some Leitrim voices there.”

Looking towards the championships themselves, it is obvious that Déarbhla harbours hopes of performing well - “I’ve never been abroad before and I won’t know anything until I go over there and get weighed in.

And her own targets over the next week or two? “I think if I go over there and I fight the way I can fight and just perform, don’t be nervous, I think I can hopefully progress and bring back a medal.”