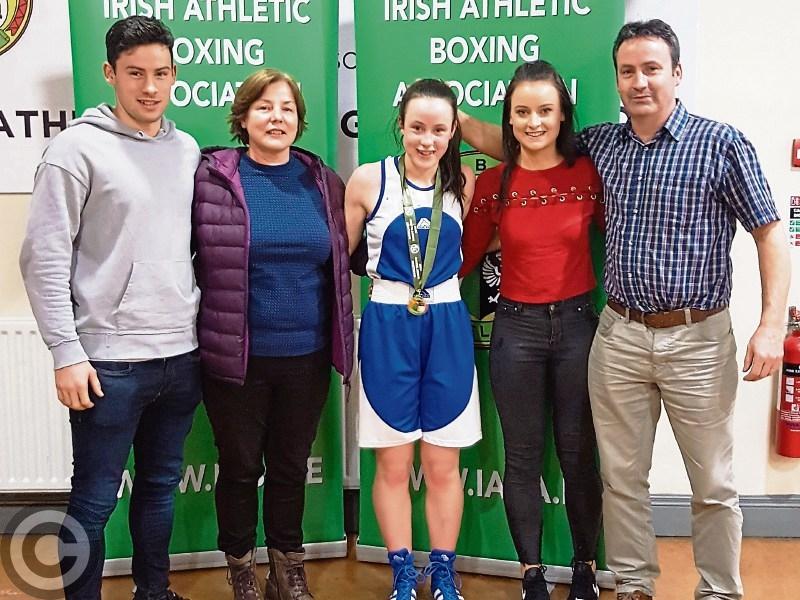 Manorhamilton's Déarbhla Rooney will fight for the gold medal at today's (Wednesday) European Youth Boxing Championships in Italy after a stunning semi-final victory on Tuesday.

The young Mullies woman beat the powerful Russian Valeria Radionova on a 3-2 split decision to book her place in today's European Youth Bantam weight Final where she will face Slovakia's Jessica Triebelova.

The second round saw the Russian forcing the pace and midway through the round, Radionova landing a big blow on Déarbhla's jaw, shaking her momentarily. But the round clearly went to Radionova who tied the scores, winning four rounds 10-9 to leave the verdict coming down to the final round.

The final round was a real brawl with both fighters throwing everything into the contest. Déarbhla re-established her clean punching and despite a few worrying moments, the young Mullies woman, a student at St. Clare's Comprehensive School in Manorhamilton, was clearly in the mix.

A nervous looking Déarbhla went to the centre of the ring for the verdict but when it was announced that victory had gone to the Red corner, all tiredness was forgotten as Déarbhla jumped high into the air with coach Michael Mongan doing likewise in the corner.

It means that Déarbhla will face a tough Jessica Triebelova of Slovakia in the final on Wednesday afternoon as she defeated her German opponent 5-0 in the other semi-final.

News of Déarbhla's victory spread quickly with the Leitrim Society of Boston sharing the news on their facebook while Glencar/Manorhamilton GAA Club, where Déarbhla is a noted footballer, termed her “The Golden Girl”.

Déarbhla started her European adventure with an unanimous 5-0 victory over Poland’s Weronika Pawlak in the first round last Thursday, a commanding victory that always had the Manorhamilton fighter in control.

The Sean McDermott Boxing Club fighter was always on the front foot in the fight and showed better stamina over the demanding three rounds.

In the Quarter-Finals, Déarbhla produced another exceptional display to defeat Nikolina Cacic of Croatia 4-1 on points last Sunday, her victory creating a lovely slice of Leitrim sporting history as Déarbhla guaranteed herself a bronze medal.

In a very entertaining and action packed contest, only the Georgian judge ruled that Déarbhla was not the winner, scoring the fight 29-28 in favour of the Croatian but the tight nature of a tough, fast paced and bruising contest was reflected in the fact that only the Polish judge gave all three rounds to Déarbhla.

The Italian and Romanian judges both had just one point in it while the Dutch judge had Déarbhla winning by two points.

With her parents Padraig and Geraldine in Italy cheering her on, Déarbhla started off the better, landing a big early hit just 15 seconds into the contest with the slightly taller Cacic and that was the way the fight progressed, Déarbhla's class keeping her out of trouble and well in control of the bout.

The Women's Finals are scheduled for 1 pm Irish time on Wednesday but an exact time for Déarbhla's fight has not yet been released but keep an eye out on www.leitrimobserver.ie and @LeitrimToday for more news of Déarbhla's Final on Wednesday.