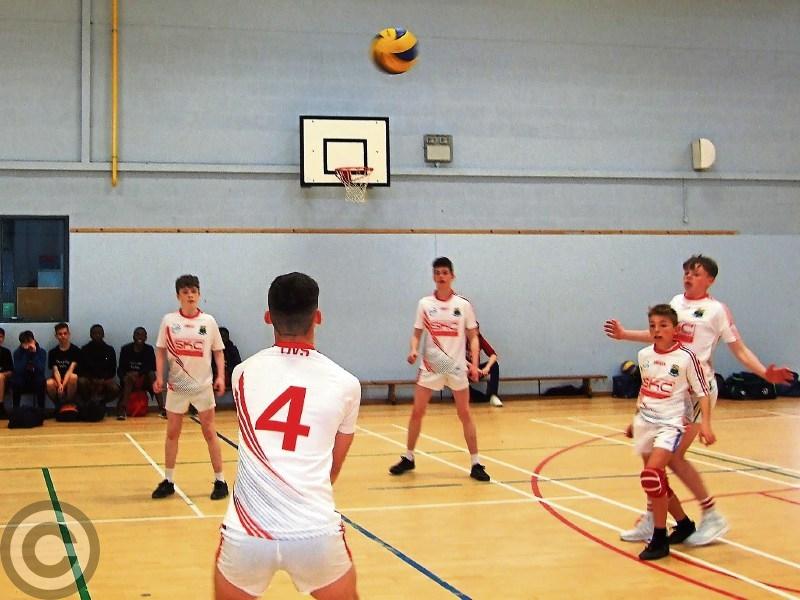 Drumshanbo players all surround the ball during action last Thursday

Two more steps done, two to go as Drumshanbo VS qualified for the national Junior semi-final with two more straight set wins. They defeated unbeaten Mountrath, overwhelming them in the second set.

They then followed up by beating Mallow with a huge first set gap. Drumshanbo have won the Cadette and Senior A National titles this year. Now they aim for an unprecedented treble.

Drumshanbo got another great examining in the opening set against this 800 pupil Laois school. Eoin Guckian was difference at the start as his serves gave Drumshanbo a 3-0 lead.

But time after time in the set, every time Drumshanbo pulled ahead, Mountrath came back. They levelled at 5, 7 and 8. Drumshanbo raced away again on Guckian’s serve to 14-9, but they were level at 16.

As Drumshanbo stuttered through, Ronan Moran starred. He lunged in all directions to redirect wayward balls over the net and often blocked the counter attack.

Drumshanbo shot ahead again to 20-16 but, with nerves high, Drumshanbo allowed Mountrath to 23-22, one point away. Finally Danny McWeeney aced the winner.

In the second set the errors continued and Mountrath raced 4-0 ahead. But again Guckian serves and Ronan Moran’s variation settled them and Drumshanbo raced ahead.

At 16-7 Mountrath’s play showed how good their defence was when they withstood a battering from Drumshanbo, with 30+ touches before they surrendered. The end of the set belong to Gary Corcoran and Damien Gilmartin.

Corcoran spiked every chance he got and aced Drumshanbo 22-9 ahead. Gilmartin hit a winner on his first touch of the ball and he set perfectly all the way to the end.

Drumshanbo were now in full swing, and Guckian’s serves gave them a 6-1 lead. McWeeney hit his best spike yet. Mallow were battling hard up to 12-9 but Conor Flood took his turn in the limelight serving all the way to 21-9.

The latter half of the set saw the return of Shane McKeon. Missing the previous round he gave a great boost with precision setting and aces.

The final set was in two halves. The Oberwan brothers, steady throughout, came into their own. They even won points on their own, with Radaslaw passing to Arcadiusz who set the ball high for his tall brother to smash down. Radaslaw, followed by Arcadiusz hit aces to lead Drumshanbo 14-7 ahead.

Manager Shane Hegarty felt it was time to give the subs more time. This time things went wrong. There was a night mare period where only libero Seán Moran kept his cool with perfect passes. Mallow crept to 13-14.

Drumshanbo recovered somewhat to 23-18 but further confusion brought to it 24-23. Finally Damien Clarke and, making his debut, Sam MacGillivray Dawson came on Neither put a foot wrong and Drumshanbo were in the semi-final. Shane’s gamble paid off!

Elphin Community College have qualified for the National semifinals next Thursday in the University of Limerick where they will play Drumshanbo Vocational school.

This match probably sums up the team’s whole campaign. They started brightly, controlling the game with good setting from Henry Dowd and hitting from Sam Rodden. Some fine serving from Declan Main and Colin Burke opened up a commanding lead. Evan Gunn was introduced for Andrew Shanahan and the first year student showed little nerves with a number of important touches.

The second set started well for Elphin with them leading 10-4. As in previous matches however, when Fethard won four scores from unforced errors, the Roscommon side began to panic. An over reliance on using the forearm pass and a loss of concentration contributed to Fethard taking a 22-17 and then 24-21. However Elphin did show resilience when the set seemed lost and Main closed out the set with 5 unanswered serves to win 26-24.

When Loughrea beat Fethard both Elphin and Loughrea knew that they were into the semifinals but if they could top the group it would mean avoiding Drumshanbo VS who were impressive in the previous round.

The first set was a tight affair with the lead not more than two points for most of the opening exchanges. Elphin led 12-10 then 19-16 and 21-18. Elphin's Alan Gormley recovered a difficult ball to leave Elphin needing one score to win the first set 24-22.

However unforced errors again were to be their undoing, with Loughran scoring four unanswered points to win 26-24.
This team has plenty of ability and can go all the way in this competition but when scores go against them they compound the situation with a loss of concentration and forget to do the basics well. Loughrea opened up an early lead in the second set, 10-3 and then 19-11. They easily finished off the Elphin challenge 25-13.

Elphin now face Drumshanbo VS in another national semi-final. The two schools have never met in a final at any level, despite all the finals both schools have been involved in. The Roscommon team will have to show great character to add to their undoubted ability if they are to upset the odds and reach the final which takes place on the same day. 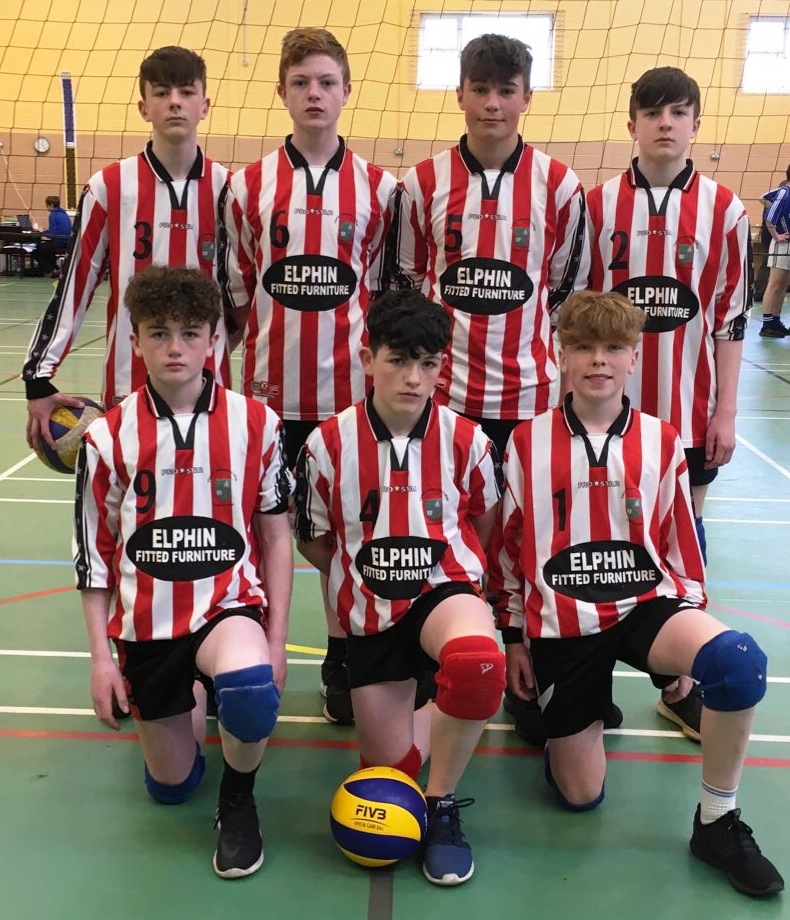 This Thursday in the University of Limerick, the Drumshanbo Juniors aim to make a fabulous year for the school into something greater. If they win the Junior, the school will have won all three A titles in one school season.

This has been the best year for the school since 2003/4. That year the school (for the only other time) won the Senior and Cadette A titles. They had an excellent Junior team that went on afterwards that summer to make history and win the All Ireland Community games.

They had beaten Elphin at the seedings stage and were expected to cruise into the final. Elphin, led by Roscommon star Fintan Cregg, beat them in the semi-final and Elphin won four All Irelands at different levels and grades the next 10 years whereas Drumshanbo won none for 12!

Now they face Elphin again in the semi-final. This Elphin totally rattled Drumshanbo in the first set when they met in round 2. It won’t be easy. Elphin thrashed Fethard Tipperary in the quarters.

Looming on the other side of the draw (semi and final on the one day) is Mountrath, who also seriously tested Drumshanbo, and the top school in boys for the past 13 years: St. Brigid's Loughrea, (they have 7 Junior titles!).

Drumshanbo have not won the Junior this century! Since they became, back then (in 1999), the first school to win the Junior title twice they have lost 7 finals, many with very good teams.

This team have shown they have the talent, with five straight set wins. They have also experienced the tenseness of errors and close sets which has helped them learn. Let’s hope Drumshanbo finally get the break. Their dedication in training has been unquestionable.

Eithne Coyne, a Mayo lady took charge of the Juniors for the first time in 1999. Now another Mayo man Shane Hegarty hopes to match that in his first year. He has two Irish squad players Fergal Moran and Gareth Gilmartin with him for the task.