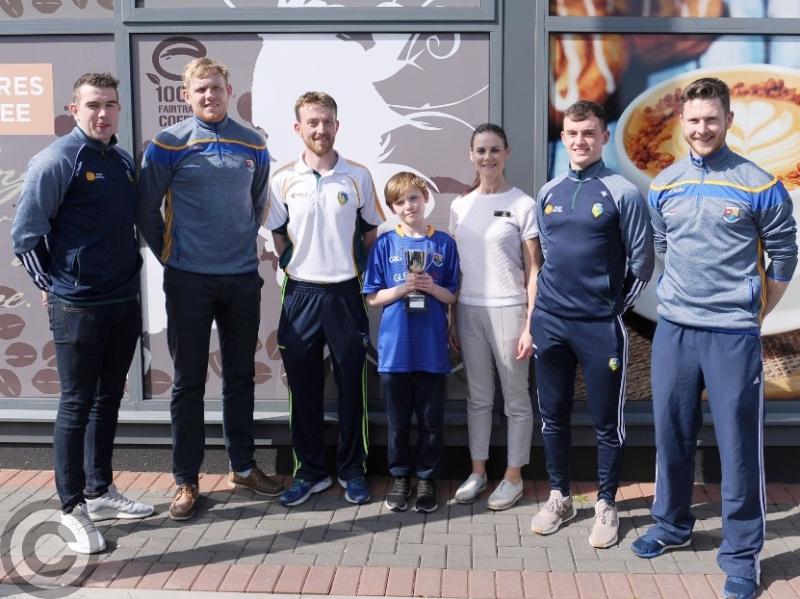 Diarmuid McKiernan (left) pictured at the launch of the Esquires U12 Longford Leitrim Cross-Border League. Photo by Declan Gilmore

Confidence in yourself and in your teammates is vital for any goalkeeper according to Leitrim netminder Diarmuid McKiernan as the county faces into Saturday’s Connacht Senior Championship Semi-Final against Roscommon.

The Allen Gaels clubman has made the Leitrim number one jersey his own this year and made some huge interventions against New York in what was his Championship debut for the Green & Gold.

But unlike his fellow debutants, the role of the goalkeeper is something of a solitary role but Diarmuid says he relies on his teammates to make his job all that easier - “I have communication with the backline, we are kind of one group although as you say, it is a solitary role.

“The full-back line help me out with some situations, just working on little bits, just to get the edge over the opposition. Kevin Ludlow, the goalkeeping coach, has come in and he has done it before, he gives you great insight.”

The Leitrim keeper was speaking at the launch of the Esquires U12 Longford Leitrim Cross-Border League and is pictured above with, from right, Longford's Paddy Collum, Leitrim GDO Enda Lyons, Jack and Dee Monahan from Esquires, Leitrim's James Mitchell and Longford's Mickey Quinn.

Facing Jamie Clarke one-on-one might seem like a no-win situation but for Diarmuid, that is the easy stuff as kickout strategies are now the number one priority for any keeper - “I’ve confidence in myself if someone is facing me but it is the kickouts that can be hardest to master, everyone is kind of copping on to different strategies now.

“It is so many different part and the keeper can get the blame if it goes askeways but in fairness, the backline have worked immensely on a few strategies and we’re just really trying to perfect it for the next day.”

SEE THIS WEEK'S LEITRIM OBSERVER FOR MORE FROM DIARMUID AND KEEP AN EYE OUT ON WWW.LEITRIMOBSERVER.IE FOR MORE NEWS AHEAD OF SATURDAY'S CONNACHT SEMI-FINAL