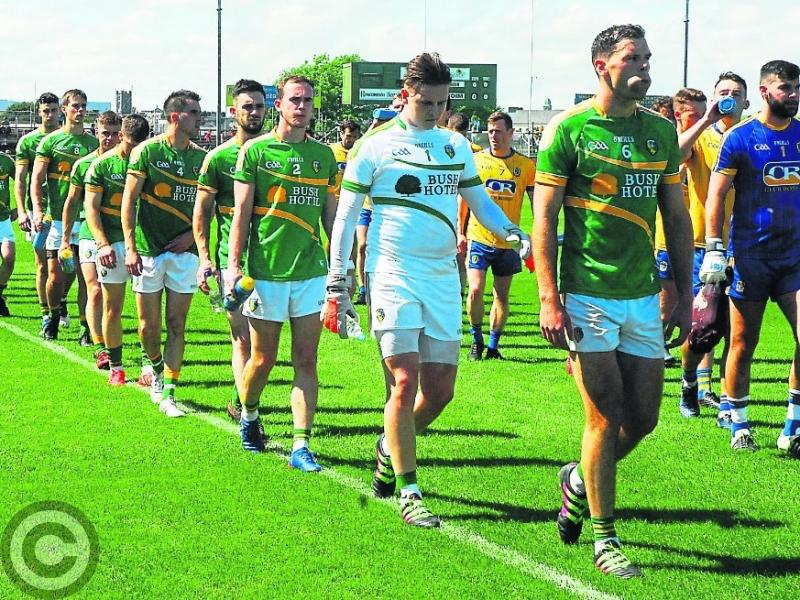 Captain Donal Wrynn leads his Leitrim team-mates during the parade in Hyde Park before the game against Roscommon. Photo by Willie Donnellan

When Donal Wrynn describes it as “a tough a day as any of us has had on a football field” you get the sense of what last year’s Connacht Championship Semi-Final loss to Roscommon did to the Leitrim team psyche.

So it would be understandable if there were still lingering shock-effects but as Leitrim prepare to host the reigning Connacht Champions next Saturday, the Leitrim captain is determined to ensure that it does happen again.

“I think we always look forward to playing Roscommon but over the last few years it hasn’t gone too well for us,” Donal told the Observer, “We feel that we are a lot stronger than the Leitrim team that played Roscommon last year so there is a lot to be positive about from our point of view so we are definitely looking forward to it.”

Donal readily admits that last year’s record defeat left a mark but he feels that a young Leitrim team are a different prospect to the team that saw action in Hyde Park in 2017 - “It was as tough a day as any of us has had on a football field but I think generally the feeling among us is that we are a lot improved.

“Our fitness levels, the physical training we’ve done this year, I think it has brought us on a lot more and brought us on another level to where we were last year and even two years ago and that gives us a lot of confidence.”

And the emphasis on Saturday will be on performing next Saturday and not remembering Hyde Park - “Personnel wise, the team has changed a lot and even the mindset of the guys who are still here has changed a lot. We kind of feel we are a new team to what played last year.

“We will use it is a motivation to a point but we’re not totally buying into the idea of making up for last year. Obviously we do have to make up for what happened but 2018 is our focus.”

The Fenagh St. Caillin’s clubman is well aware of the size of the task facing Leitrim in Pairc Sean Mac Diarmada - “They are Division 1 at the end of the day, they are after going back up and looking at their forwards, they probably have the strongest forward line in Connacht.”

Some of the reason for Donal’s optimism was the way Leitrim battled to victory in Gaelic Park, a game that the Leitrim captain believes has been a transformative experience for the team - “We got out of New York, we were together for four or five days out there and I think it has brought us together as a squad.

“Not even just the game, the whole New York experience. Obviously it is a very young group, it brings us an awful lot closer as a group and we learned an awful lot about each other, about playing the game.

“The intensity has gone up a couple of levels. It is a very tough trip and they obviously have a very strong team, more so than any other year, and we saw what they did to Roscommon two years ago and they put it up to Sligo last year.

That, of course, leads to the question of how worried was the Leitrim captain approaching those frantic final minutes - “You had to recognise you were in big trouble but at the same time I know, with the personnel we have, guys like Aidan Flynn arguably changed the game for us and all he did was give us a bit more width.

“I know the guys had the ability to come back and with some of the players, the pace we have, a goal is never too far away. I don’t think you could say we didn’t believe but it was definitely a moment where your heart is in your mouth.”

And the win also gives Donal hope for the future - “All we can do is stick together, building from one year to the next. It has been a bit of a challenge for Leitrim to keep a team in place, it has always been a different panel every year but after the New York experience, maybe a bit more loyalty to each other and hopefully we will stick together and push on in the next few years.”

One aspect of the win in New York Donal would like to see replicated on Saturday was the support coming from the stands - “The support we got was unbelievable, we needed it as you saw. We needed that 16th man when it came to the melting pot in the last five minutes of the game so I’d be hoping we would get something similar on Saturday. It is a home game so maybe a bit more.

“We still have to show appreciation to our supporters, it was a massive undertaking to go out to New York and for so many of them to do it.”