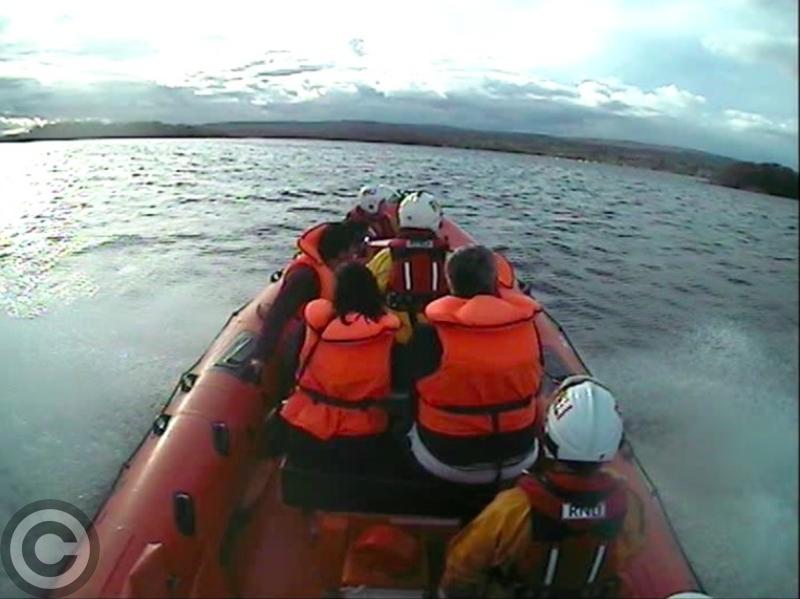 A RIB in action on Lough Derg

On Friday last, Sean Kyne TD, Minister with responsibility for the Inland Fisheries sector, officially launched the first of 12 new state-of-the-art Rigid Inflatable Boats to be delivered on a phased basis to Inland Fisheries Ireland for use as fisheries protection vessels around Ireland’s coastal zone and larger inland lakes.

Minister Kyne was joined at the launch of ‘Delta 1’ at Rathmullan, near Letterkenny, by Joe McHugh TD, Minister with responsibility for Gaeilge, Gaeltacht and the Islands, and local public representatives. Delta 1, which will be based in Letterkenny, entered service on June 1.

Minister Kyne said “The launch of this first vessel marks the Government’s commitment to augmenting IFI’s capabilities for protecting valuable inland fisheries species as they migrate offshore and enhancing protection in larger inland lakes. This is the first in a chain of twelve protection and enforcement vessels to be based around the country. The new RIBs will be phased in over a number of years, replacing the current ageing fleet, at a total cost of €3.3m.”

Currently, IFI has 23 RIBs located around the country, the youngest of which was built and began operations in 2006. The new model is the DELTA 780HX Maritime Protection RIB and was designed and built by Delta Power Services of Stockport, UK, following a competitive tendering process. There were no applications from Irish vessel-building companies.

IFI assembled an expert team to review the tender applications, including members of the RNLI and Irish Water Safety Association. The twelve new RIBs will be named in sequence from Delta 1 through to Delta 12.

Trials of the new RIB model took place in Southampton, UK, in mid-April before the Delta 1 was delivered for crew familiarisation and training in Crosshaven in May.

“The recreational angling sector in Ireland is worth €836m to the Irish economy and supports over 11,000 jobs nationwide,” said Minister Kyne, “so it is vital for the protection of our national fisheries resource that we have a modern RIB fleet capable of conducting patrols and responding rapidly to suspected breaches of our fishing laws.

“Therefore, I endorsed IFI’s view that the phasing in of a new fleet, which conforms to the highest standards of safety, navigation and communications equipment, is overdue and warranted.”

Minister McHugh added: “I know from my time as Minister with responsibility for Inland Fisheries that the new RIBS will provide the added cost-saving bonus that the older fleet required a system of twin boat patrols - for example, one workboat recovering and confiscating illegal nets with up to three crew, as well as another stand-off boat being present for safety and security with two crew.

“In contrast, the new IFI model is a single boat patrol vessel with an average of three crew members. It is, also, a substantially more sophisticated vessel with a Length Overall of 7.80 metres, and is licensed by the Marine Survey Office to operate to 12-miles. This offers the additional capacity to assist the emergency services, if requested.”

The new RIBS will be crewed by fully trained and warranted Fisheries Protection Officers, who also carry the remit to board suspect vessels, as required.