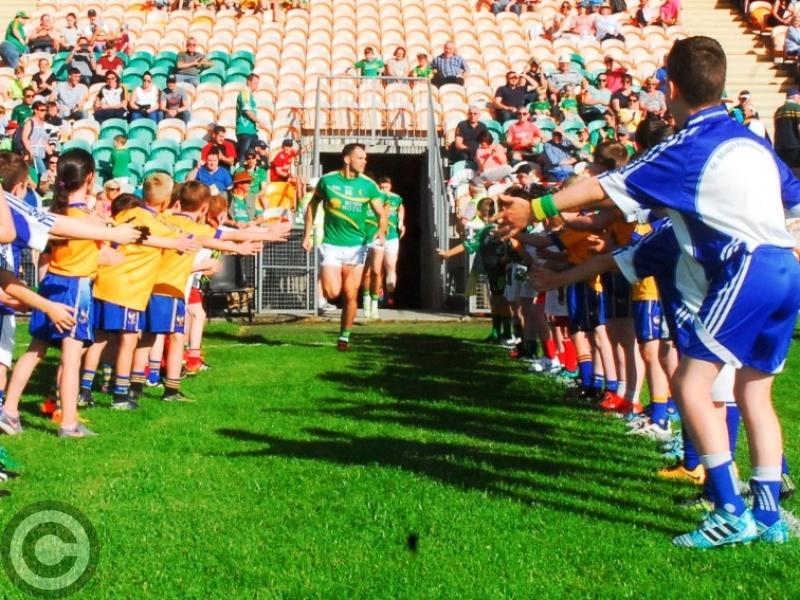 Donal Wrynn leads the Leitrim team on the field. Photo by Willie Donnellan

The grin on Donal Wrynn’s face said it all last Saturday evening as the Leitrim captain finally got the chance to lead his county to a big performance on a big day.

The Leitrim captain has consistently preached that a young Green & Gold team were capable of much more and the win over Louth was proof - “Absolutely delighted, over the moon. I suppose we felt on the big day that we have shown what we’re capable of and I think today we probably got that performance that we knew that was in us.”

And the Leitrim captain insisted that the seeds of victory were found in New York even when the panel was hit by the loss of six players in the lead up to the Louth game - “The feeling generally would be, even with the guys who are left, the squad are very united.

“Even the trip to New York and the pain of Roscommon and all of that put together, it builds character and it builds a lot of strength within us. Our response in training over the last couple of weeks in training with the lads who have come back has been first class and we got the performance we felt we deserved.”

Looking back on the performance, Donal highlighted the impact of the forwards and the self-belief in the camp - “Real top quality scores, Damian was at it again today, he really has been scoring for fun over the last couple of weeks and he put in a few huge performances against Roscommon and today.

“Look, you could probably pick out any of the forwards, you could pick out anyone on the field because it was just a good performance. We started poorly, the goal was a bit of mix-up at the back and it took us a while to get to grips with Louth, they had the sending off and that just opened it up.

“We had a look at each other at halftime and said we can either go out here and show what we are capable of or we can leave it here for the year. I think everyone sort of stepped up and straight from the off, we went at them, we scored six or seven points without reply.

“It was very much a decision within the dressing room that we either go at it now or that’s it.”