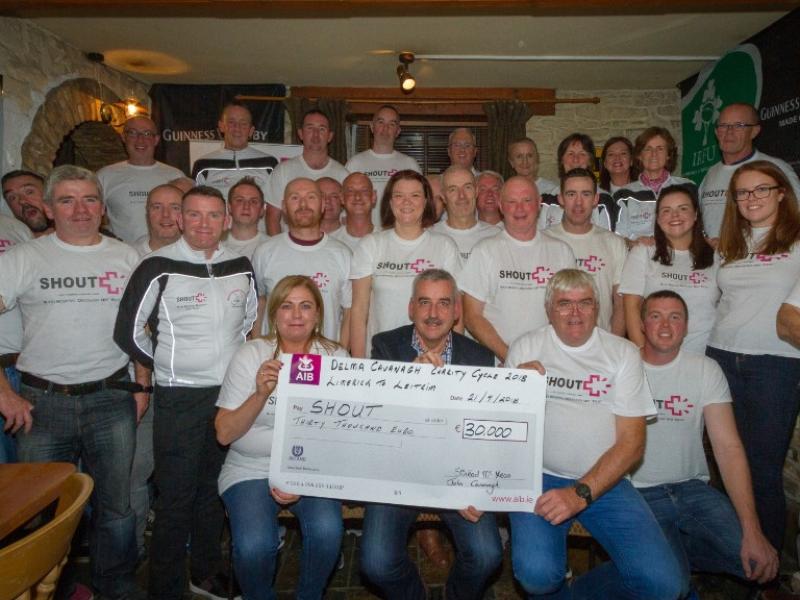 Cyclists, support crew and organisers from the Delma Cavanagh Memorial Cycle came together in Dromahair on Friday night last for the presentation of this year's fundraising efforts to the Sligo Hospital Oncolgy Unit Trust (SHOUT).

Event co-organiser, John Cavanagh thanked all who participated in the cycle and also detailed the extra fundraising efforts that took place in advance of the annual Limerick to Leitrim cycle.

A number of turbo charged cycling events were held in Sligo, Dromahair, Drumshanbo and Strandhill in advance of the main event which was held in August.

There was also a cake sale and a table quiz while all involved in the cycle were busy raising funds for SHOUT.

John and fellow event organiser Sinead McKeon gave an insight into the level of preparation that is required to successfully undertake such an event and they thanked the support crews who helped keep the cyclists safe over the two day event that saw them cycle 280km over the course of two days.

As well as thanking the cyclists who had the difficult task of safely negotiating the journey to Dromahair, John and Sinead were quick to thank the large support crew who helped ensure the needs of the cyclists were well catered for over the course of the two days they were on the road.

They reserved special praise for the marshalls who were a vital part of the crew with the role played by Breffni O'Rourke from the Traffic Corps singled out for special praise.

Sinead gave a further indication of the level of planning that is required when organising an event that sees 40 cyclists and numerous support vehicles travel for in the region of eight hours on successive days as she revealed the hotel's for next summer's event have already been booked.

John and Sinead also reserved a special word of thanks for the community of Dromahair who have supported the event since it was first held in 2013.

Ever since John, along with friends and family cycled from his adopted Dromahair to his native Limerick in memory of his mother Delma the cycle has grown size and success every year.

John referred to the feeling of pride and accomplishment felt by all who had completed the cycle as they entered the village and came down the hill to see huge crowds of friends, family and well wishers offering support.

The past two years have seen the cycle raised in excess of €18,500 and hopes were high that target could be surpassed but there was widespread shock when Sinead and John revealed the combined total from the various fundraising efforts has seen the Delma Cavanagh Cycle raise €30,000 for SHOUT this year.

Michael Carr accepted the cheque on behalf of SHOUT and thanked the organisers, cyclists and fundraisers for their incredible efforts.

He spoke about how the money will be of significant assistance to patients receiving care and stressed all money raised will go directly to where it is needed most.